Source: courtesy of Twitter
Twitter Inc. (NYSE: TWTR) posted a solid premarket gain on Tuesday morning, and the stock gapped up over $50 on the open. This is the first time the stock has opened above $50 since March. The question that many investors will have is what is driving this stock higher, and the answer may be multiple issues ahead of and after a holiday weekend.

Twitter’s share price tumbled after March on speculation that the company would be unable to grow its user base. What does it tell you when the share price opened Tuesday at $50.02, up from the May low of $29.51? That is a gain of nearly 70%. Twitter’s 52-week high from December was $74.73, about 50% over Tuesday’s open — which might lead many investors who were caught at the top still feeling stumped regarding this social media giant.

We pondered back on May 20 whether Twitter shares were bottoming out. That turned out to be very fortuitous, with a degree of admitted luck on the timing.

Over the course of August, Twitter had consistent gains, opening the month at $45.01 and closing just below the $50 mark at $49.75. On the last day of August, Twitter did touch $50 though. Most of the gains in August were realized in the final third of the month, and the gains were on strong trading volume at a time when total overall market trading was little more than anemic.

READ ALSO: 4 Chip Stocks to Buy That Don’t Need PC Growth for a Strong Finish to 2014

On top of having had a great August, Twitter shares had previously broken above the 50-day moving average in June, and that same level on the trend lines and around the $36 to $37 handles acted as support in July. So again, the recent flow that has driven Twitter’s stock higher may be multiple issues from the past few trading sessions prior to Labor Day.

It was interesting to see that two directors of Twitter sold a combined 90,000 shares last week, but those were exercised stock options with a combined proceeds north of $4 million. This was close to a month after Twitter’s incredibly strong earnings report.

Another positive that was carried over from last week was that Twitter added 12 markets in Central and Eastern Europe where it would have advertisements. That might not be much today, but it is at least a base for days ahead.

Another driving force behind the move may be follow-on news that Snapchat reportedly received venture funding from the very well-known venture capital outfit of Kleiner Perkins Caufield & Byers with a whopping $10 billion valuation. If Snapchat has a $10 billion market value with close to zero in past revenues, then maybe having a $30 billion market cap with more than $1.3 billion in expected 2014 revenue and over $2.25 billion in expected 2015 revenue doesn’t sound like a crazy valuation for Twitter.

Twitter also has more than $1.27 billion in net operating losses to carry forward against current and/or future earnings to offset its tax bills ahead.

READ ALSO: Merrill Lynch Says Tech Hardware Still the Stocks to Own in 2014

Shortly before noon Eastern Time on Tuesday, Twitter shares were up 2.7% at $51.10 on almost 15 million shares.

Now for the real question. If the stock’s bottom came at the time of a peak bad news, do we dare start to worry about the stock’s strong continued performance on the heels of what seems like endless good news? 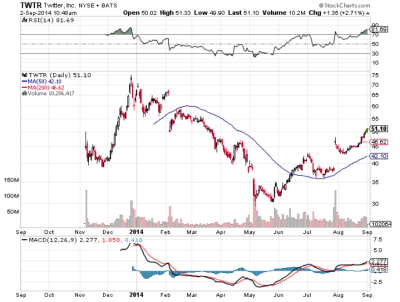