Will People Trust Facebook Enough to Use Its New Digital Currency?

In March, Facebook Inc. (NASDAQ: FB) CEO Mark Zuckerberg essentially refocused the company he founded and controls as “a privacy-focused messaging and social networking platform.” Zuckerberg outlined how Facebook will achieve that in a 3,000-word essay on what people want and how Facebook will respond to those demands.

One of the things that Facebook believes people want is a private, secure way to transfer money — and this is how the social media platform is breaking into cryptocurrencies. To that end, the company on Tuesday introduced a digital currency called Libra and a digital wallet called Calibra to hold that currency. Both were created at Facebook, but the Libra currency has been passed onto an independent, nonprofit organization called the Libra Association, the purpose of which is “to coordinate and provide a framework for governance for the network and reserve and lead social-impact grant-making in support of financial inclusion.”

Facebook’s partners include heavyweights like MasterCard, Visa, Uber, Lyft, Spotify, eBay, and Vodafone along with venture capital firms like Andreessen Horowitz and Union Square Ventures. Facebook hopes to have about 100 companies in the Libra Association by the target currency launch date in the first half of 2020.

The other piece of the digital currency introduced Tuesday is Calibra, a digital wallet that will initially be available in Facebook’s Messenger and WhatsApp messaging apps and in a standalone version for both Apple’s iOS and Google’s Android smartphone operating systems. Funds denominated in Libra stored in a user’s Calibra wallet can be sent to “almost anyone with a smartphone,” according to Facebook’s announcement. The company even published a peek, below, at what the Calibra program might look when it’s up and running. 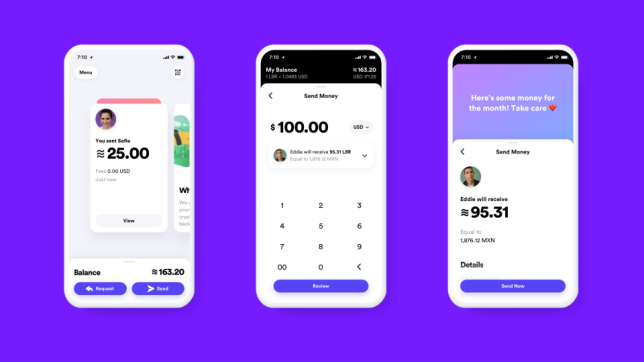 Facebook is not known for taking great care with its users’ data and that’s why the company is quick to point out that, except in “limited cases, Calibra will not share account information or financial data with Facebook or any third party without customer consent.” Neither will Facebook use consumer data “to improve ad targeting on the Facebook family of products.”

Calibra will use Facebook data “to comply with the law, secure customers’ accounts, mitigate risk and prevent criminal activity.” The Libra Association spells out what that means in a separate white paper.

If, as Zuckerberg said in March, Facebook is going to become more focused on messaging and privacy, it will have to find a way to monetize that new direction. The announced plan for Libra and Calibra is somewhat different from the one leaked to The Wall Street Journal in early May. The major difference is that the WSJ’s source indicated a much closer relationship between the digital currency and Facebook. Analysts are already beginning to debate whether a new concurrency will save or destroy Facebook.

24/7 Wall St.
15 Great Dividend Stocks Retirees Should Own in 2019
Get Our Free Investment Newsletter