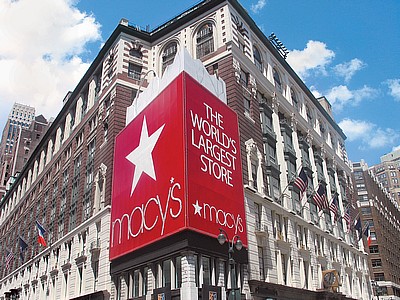 Source: Macy's Inc.
Macy’s Inc. (NYSE: M) is already the king of mall-based and standalone department stores in America. Still, an idea for Macy’s to greatly boost its value that has made the rounds before was floated again on Wednesday — selling off its vast real estate holdings.

Activist fund Starboard Value disclosed a new stake in Macy’s common shares, along with the informal proposition that Macy’s should sell off the real estate and conduct a sale-leaseback plan.

Jeff Smith of Starboard spoke at CNBC’s Delivering Alpha conference in New York. While this might not pertain to every single piece of land the company owns, Starboard’s public commentary pointed toward the real estate being worth about $21 billion. That may raise some eyebrows due to Macy’s having a $22.5 billion market cap before its stock ran on Wednesday.

The firm even suggested a $125 share price. So, does one truly interpret this as being the chance for Macy’s to unlock so much value that it could double? Well, that depends on how you view such transactions. A sale-leaseback arrangement can unlock value today, but it could leave a company with an uncertain hole in its business model in the years ahead.

Starboard is a rather well-known activist manager that has a solid track record of getting companies to unlock value. Whether that would be the case here is something we will leave up to you and the market to decide. Again, it is not exactly a new notion. In some ways this seems, without the tax considerations, like the pressure for companies to form outside partnerships or to pursue alternatives with certain units or assets.

Where this gets interesting in this case is that Macy’s “Property Plant & Equipment” was carried most recently as $7.71 billion on its balance sheet. That may of course not be the current replacement cost or full market value. The year-end balance on that was $7.8 billion in January 2015, and was $7.93 billion a year earlier and almost $8.2 billion two years earlier.

ALSO READ: 5 Dividend Stocks That Give You Consistent Raises

It will be interesting to see just how analysts rate or re-rate Macy’s on Thursday and Friday. The consensus price target from Thomson Reuters is $68.26, while the highest analyst target price is up at $82.00.