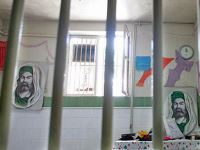 The amount of time the nation’s criminals spend in prison has risen steadily for two decades. In 2009, the average released prisoner had served just shy of three years, a 36% increase from 1990. As prison stays have increased, so have the costs, to the tune of tens of thousands of dollars per prisoner.

Read: The The States With The Longest Prison Terms

The Public Safety Performance Project, part of the Pew Charitable Trust, released a report examining the duration of prison sentences and stays in 35 states. The report, “Time Served: The High Cost, Low Return of Longer Prison Terms,” measured the average prison sentence for prisoners, the average time served, and the increased costs associated with keeping criminals incarcerated for longer. Based on the report, 24/7 Wall St. identified the states with the longest prison stays in the country.

According to the report, the states with the longest average prison stays, ranging from 3.1 years per inmate to 4.3 years, grew the most in the past two decades. In eight of the 11 states listed here, average time served increased 32% or more. The average increased 83% in Oklahoma and nearly doubled in Virginia. Of these states, eight were among the 15 with the largest increases.

Reasons for the increase vary, according to Adam Gelb, director of the Public Safety Performance Project. In recent years, some states have passed legislation that increases how much each prisoner serves of his or her sentence. Also, parole boards have been more reluctant to release prisoners, regardless of the laws.

However, according to Gelb, the biggest driver is the belief that longer prison terms reduce recidivism. Unfortunately, Gleb says that it does not appear to work. “For a substantial number of non-violent offenders, there is little or no evidence that keeping them locked up longer prevents crime or keeps them from re-offending once released from prison,” Gleb reports.

The average cost of keeping a prisoner locked up varies widely. In Oklahoma, it is estimated to cost the state $1,529 per month. In Oregon, the monthly bill is $5,304. Even at the lower end of the cost spectrum, these costs add up.

States spend tens of thousands of dollars more now than in 1990 because prisoners serve an average of nine additional months. In Michigan, the average time served grew by 23 months, more than any other state, or $53,247 more for the additional prison time. It is estimated that, of the prisoners released in 2009 alone, the state spent $471.9 million more than it would have if the average stay was still at 1990 levels.

The Pew report also broke out the costs resulting from increased prison stays into three major types of crime. Since 1990, the length of stay for those committing property crimes, such as theft and burglary, increased 24%. Time served for drug-related crimes and violent crime rose more, with 36% and 37% increases, respectively. The average period of incarceration for violent crimes, which include murder, assault and robbery, increased from 3.7 years to five years. In Michigan, average incarceration time for these kinds of crimes increased from 3.6 years to 7.6, the longest stretch in the United States.

These are the states with the longest prison stay in the country.