10 Big Ways the Government May Be Wasting Taxpayer Money 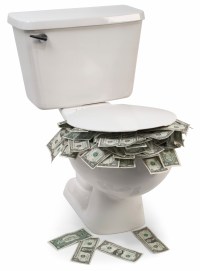 Source: thinkstock.com
Free high-end gym memberships for diplomats, a study that watched grass grow, and Swedish massages for rabbits are but some of the ways the government wastes taxpayer money, according to a new report by Senator Tom Coburn (R-Okla.).

In a phone call with 24/7 Wall St., Dr. Coburn discussed specific details of many of the most expensive cases in the report. In this year’s Wastebook, the Department of Defense is responsible for three of the 10 most expensive cases. Dr. Coburn chastised the department, noting, “Their procurement systems are totally messed up. They can’t buy anything on-time or on-budget.” Dr.Coburn was also critical of his own party’s treatment of defense spending. “Republicans have a blind eye to defense. They’ll tolerate a lot of waste.”

The Department of Defense was hardly the only government body Dr. Coburn criticized. The report argues that many agencies that handle key elements of the nation’s social safety net also exhibited waste. Medicare and Medicaid policies accounted for two of the three largest sources of waste, in dollar terms, in the 2014 report. Fraud in food stamp use, too, was singled out by the Senator as a source of waste. The Office of Management and Budget (OMB) indeed considers many of these programs to be “high-error programs,” meaning that levels of improper payments are high.

In some instances, Dr. Coburn was critical of was critical of how federal programs have been managed. Notably, he called the Department of Veterans Affairs’ treatment of sleep apnea disability claims “a management position the VA has taken that is not based on sound medical science.”

However, not all organizations have agreed with the Senator’s conclusions about their work. The National Science Foundation (NSF), whose funding of various research initiatives is heavily-scrutinized in the 2014 Wastebook, in particular takes issues with many of his characterizations. In an email to 24/7 Wall St., Dana Topousis, spokesperson for the NSF, said, “The National Science Foundation stands by its rigorous merit review process.”

Topousis added that, most NSF proposals are independently reviewed by no fewer than three independent experts neither employed at the NSF nor at a research institution involved in the proposal. Finally, Topousis noted that people “shouldn’t get caught up with the quirky names that some may attach to NSF awards.” One successful NSF-funded program Topousis cited was for a Stanford research project called BackRub. That project led to the founding of one of the world’s largest companies, Google, Inc.

Based on Senator Tom Coburn’ 2014 Wastebook, 24/7 Wall St. reviewed the 10 big ways the government may be wasting taxpayer money. Levels of purported waste are in some instances estimates and may change as federal policies are changed.