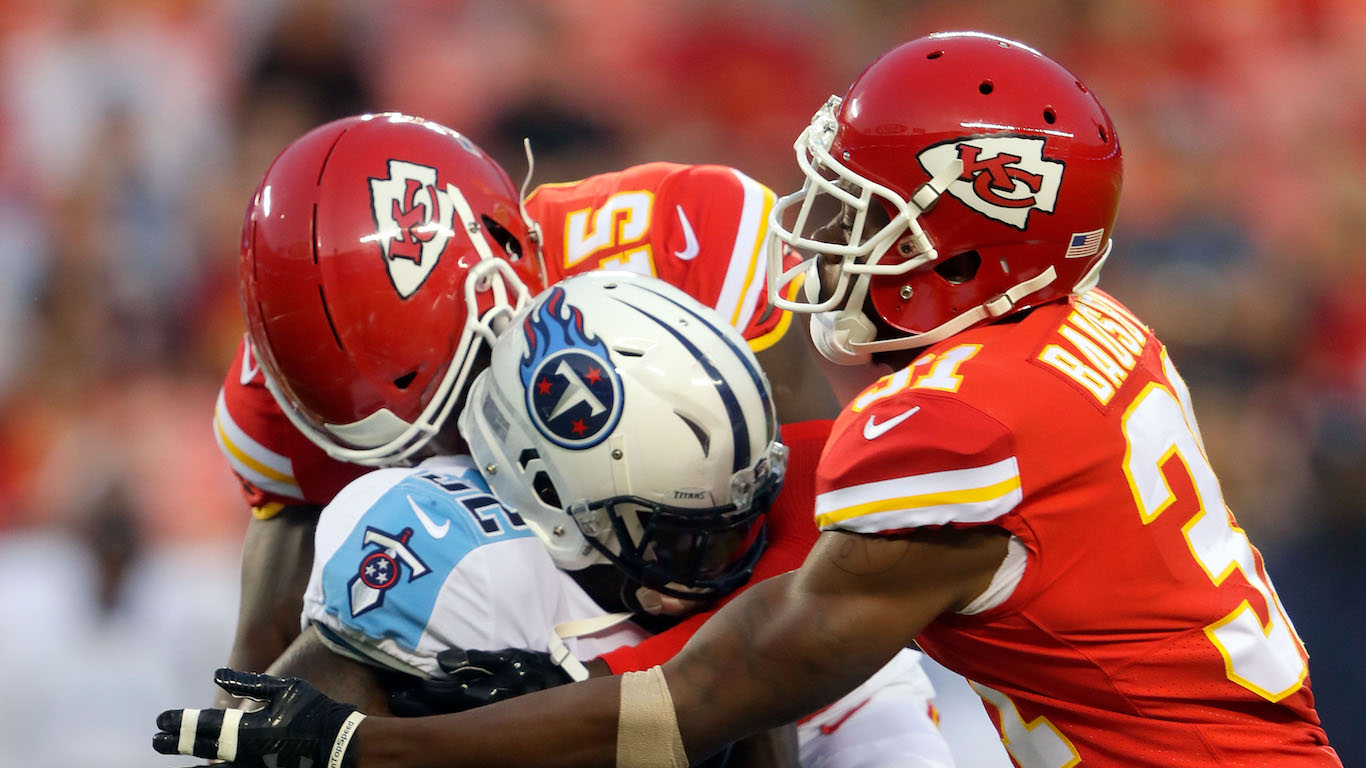 The Chiefs and Titans are heading in opposite directions. While Kansas City has won its last four games, the Titans have lost three of their last four. So no surprise that the Chiefs are the favorite.

Kansas City started the season 5-0 then went into a slump, but they’re now back on track. Quarterback Alex Smith has thrown seven touchdowns and just one interception in the final four games of the season. Rookie running back Kareem Hunt led the NFL in rushing with 1,327 yards, scoring eight rushing touchdowns. He also caught 53 passes for 455 yards and three more scores. It’s a high-powered offense that has found a way to make up for their wanting defense. The Chiefs defense is ranked 28th, allowing 365.1 yards per game.

Titans quarterback Marcus Mariota, in his third season, had a career-low 13 passing touchdowns and a career-high 15 interceptions this season. It’s uncertain if running back DeMarco Murray will be ready to go after missing practice Tuesday with a knee injury. The Titans will need Murray and an exceptional defensive game plan to slow down the Chiefs’ high-powered offense. Tennessee is 3-5 on the road, and Arrowhead Stadium is one of the toughest places in the NFL for opponents to play. The Chiefs are 6-2 at home.

The last time the teams met in the playoffs was in 1994, when the Titans were the Houston Oilers. The Chiefs won that game 28-20. 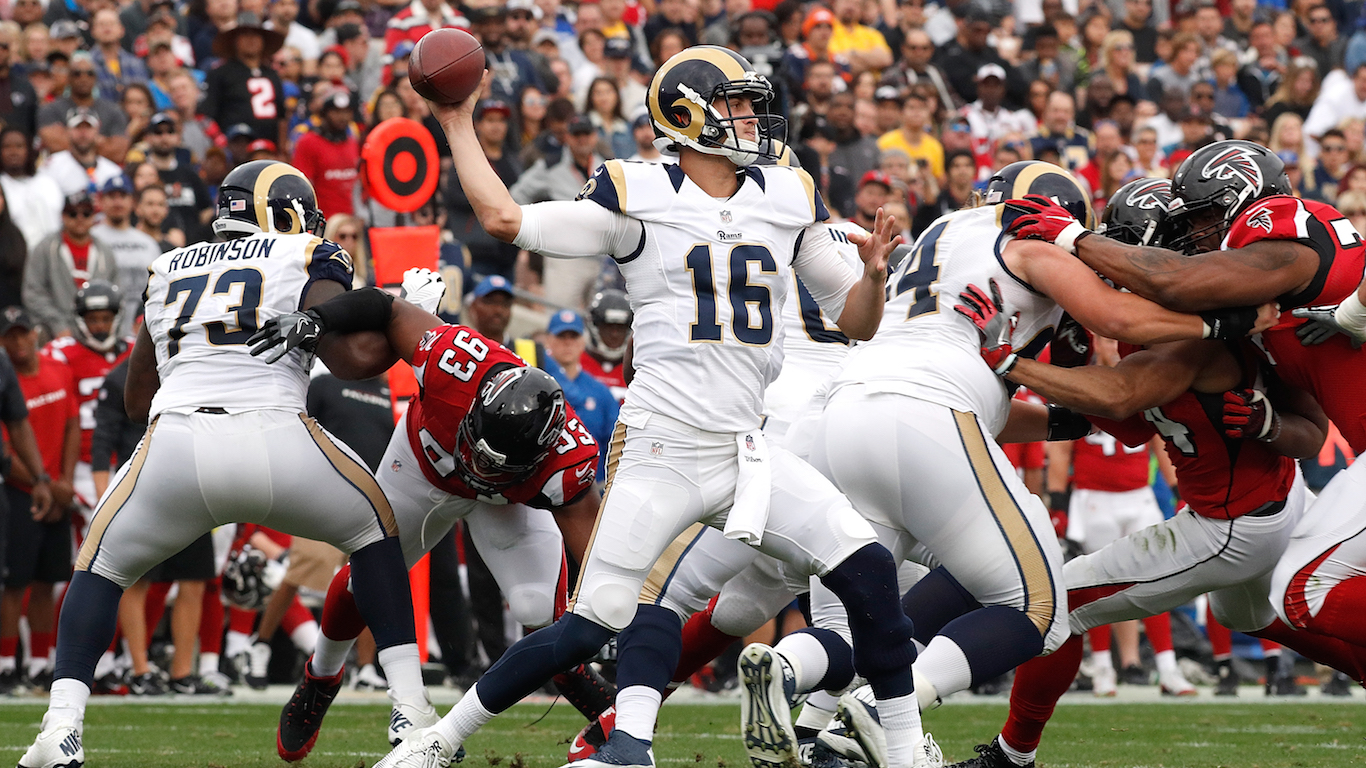 The Rams are the NFL’s feel-good story of the year with 31-year-old coach Sean McVay leading them from the NFL’s least explosive offense in 2016 (224 points) to the highest scoring in the NFL (478) in 2017. No wonder they’re a big favorite in this Wild Card matchup.

Quarterback Jared Goff, running back Todd Gurley, and wide receiver Cooper Kupp sat out Week 17 so they should be rested and ready. Goff, who is thriving under McVay, threw 28 touchdown passes and just seven interceptions in 15 games. Gurley led the NFL with 19 touchdowns and 2,093 yards from scrimmage, even though he missed the final game.

The Falcons’ defense — which is ranked ninth, allowing 318.4 yards per game — will be tested in the air and on the ground. It’s the offense, led by quarterback Matt Ryan, that must step up. The Falcons, coming off the stinging Super Bowl loss to the Patriots in February, are not the same team, and that includes Ryan who was the 2016 NFL MVP. The offense struggled under new coordinator Steve Sarkisian, with Ryan going from 38 touchdowns in 2016 to just 20 in 2017.

The Falcons won the only postseason game between the teams, defeating the Rams 47-17 in 2005, when the Rams were in St. Louis. 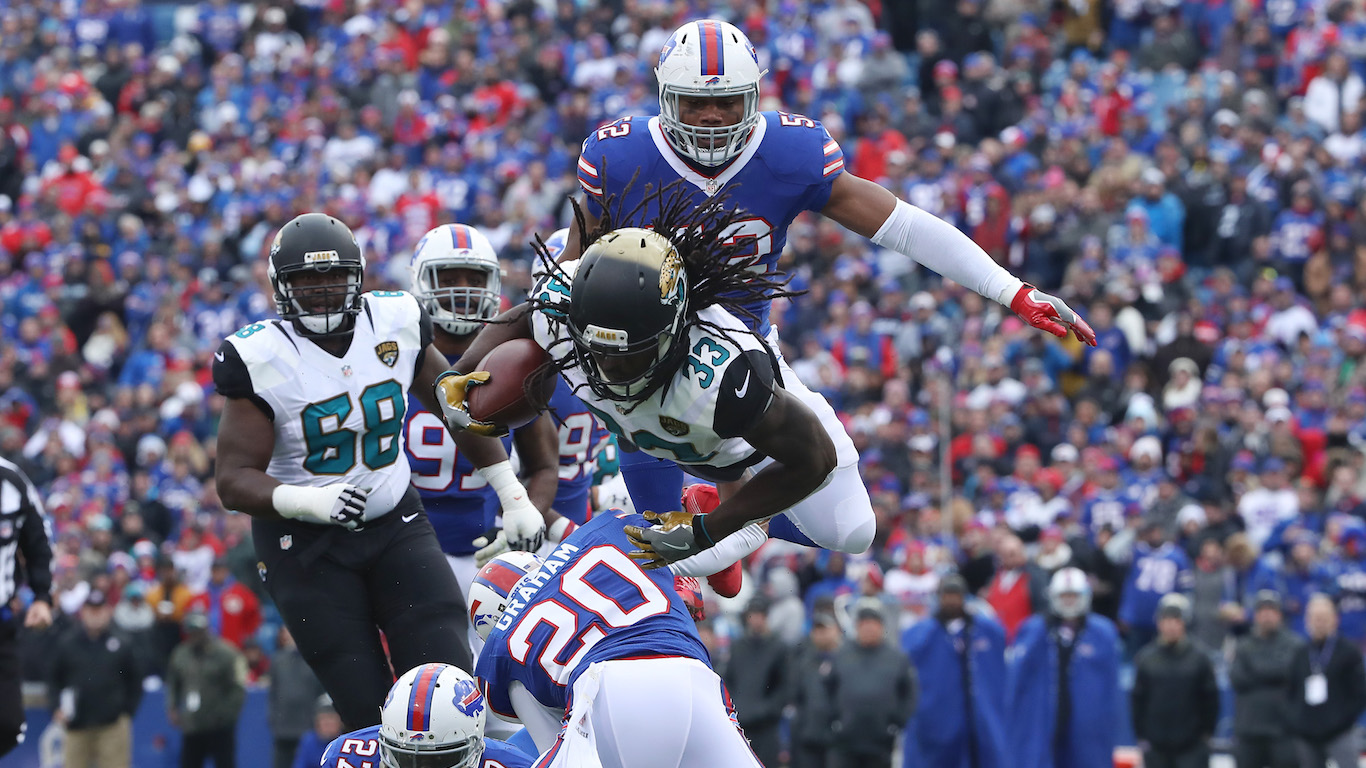 It’s the first playoff game for the favored Jaguars since 2007 and first home game since 1999. That’s nothing. This is the Bills first postseason appearance in 18 years.

Jacksonville’s defense has been a standout this season. It’s the NFL’s second best, allowing 286.1 yards per game, and it’s first against the pass (169.9 yards allowed per game). The offense has gotten a huge boost from rookie running back Leonard Fournette, who ran for 1,040 yards with nine touchdowns in 13 games. His rushing performance has taken pressure off quarterback Blake Bortles, who threw 21 touchdowns and just 13 interceptions. He also rushed for two scores.

Imagine the reaction of Bills’ defensive tackle Kyle Williams — who joined the team in 2006 and had never been to the playoffs — when Buffalo made it. Well, you don’t have to imagine, the Bills were filmed watching the final minutes when the Cincinnati Bengals came back to defeat the Ravens 31-27, which earned the Bills a Wild Card berth.

It’s the Bills’ first year under coach Sean McDermott, and it hasn’t exactly been a smooth ride. They’ve had quarterback issues with Tyrod Taylor and Nate Peterman, but still they won three of their last four games. They’re ranked 29th in overall offense (302.6 yards per game) and 26th in defense (allowing 355.1 yards per game), but in the playoffs anything can happen.

The Bills beat the Jaguars 30-27 in 1996 in their only postseason pairing. 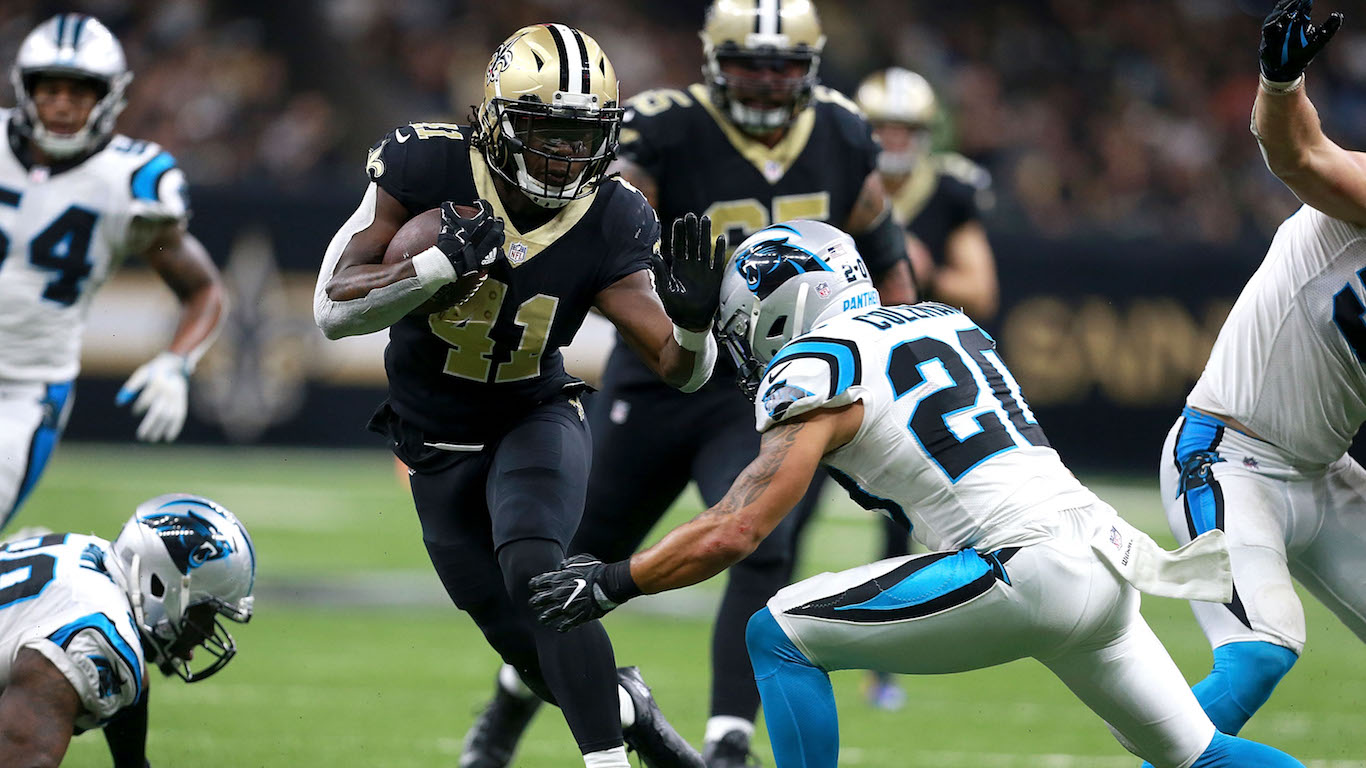 The Saints swept the Panthers in the regular season and are the favorite to make it 3-0 with a Wild Card win. They have yet to meet in the postseason.

New Orleans’ offensive success depends on its running game. Rookie Alvin Kamara and Mark Ingram are the first running back tandem in NFL history to each reach at least 1,500 yards from scrimmage in the same season. The Saints had particularly good rushing success in the two wins over the Panthers when they recorded 149 yards in Week 3 and 148 in Week 13. They’ve slowed down in the last four games with a total of 507 rushing yards. The Saints were 2-2 in that stretch.

Kamara and Ingram have taken pressure off Drew Brees, who threw for 23 touchdown passes and eight interceptions in the regular season. Defensively, Marshon Lattimore didn’t play in the first two games against Carolina because of injury, so the candidate for rookie defensive player of the year adds a new wrinkle to the Panthers.

The Panthers’ offense struggled in last week’s 22-10 loss to Atlanta, when quarterback Cam Newton had one of the worst games in his career. He completed just 41.2% of his passes for 180 yards, one touchdown, and three interceptions. With Newton as the primary rusher, the Panthers averaged 165.1 rushing yards in the final eight games.

Wide receiver Devin Funchess, who has been battling a shoulder injury, will have to beat Lattimore for the Panthers to have a chance. The silver lining for the Panthers is that tight end Greg Olsen, who typically plays well against the Saints, is healthy — unlike the first two times these teams met.