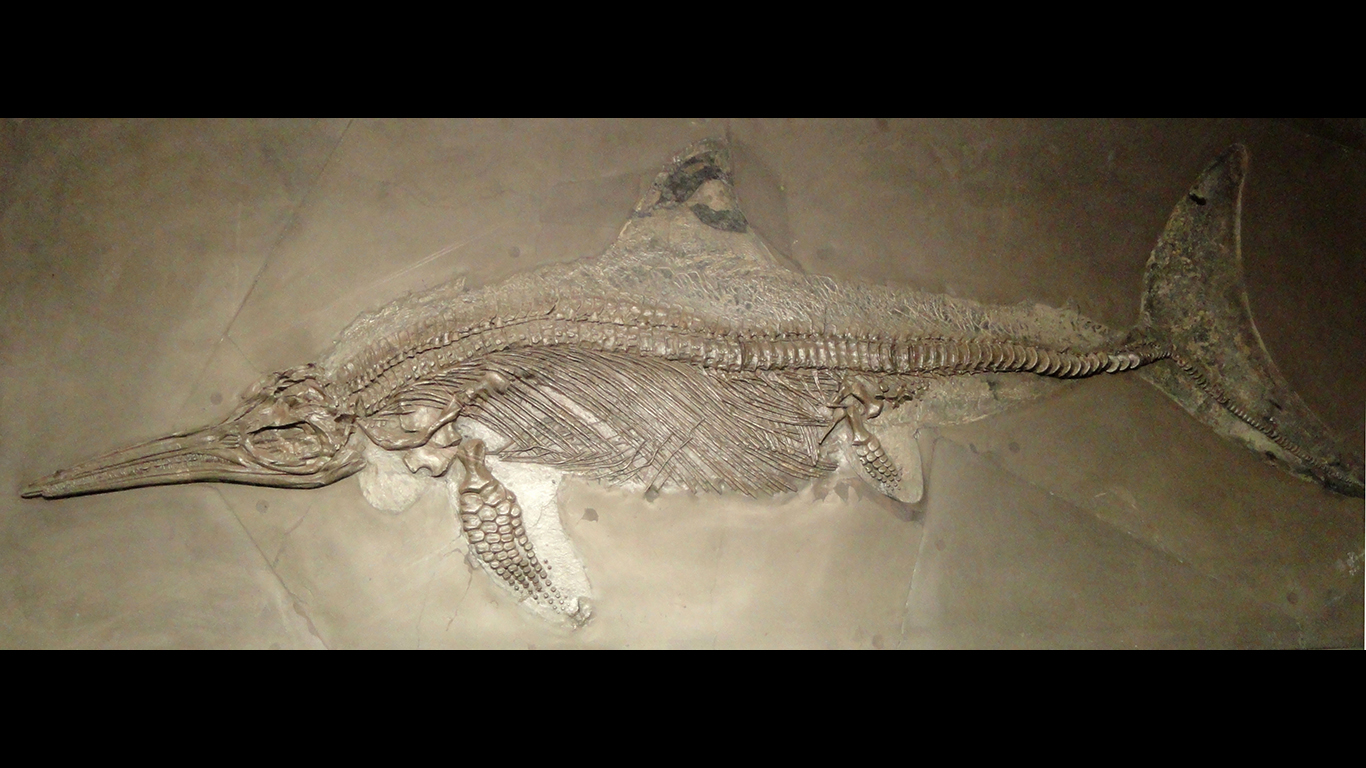 16. Mother dinosaur giving birth
> How old it is: 248 million years
> When it was unearthed: 2011
> Where it was excavated: South Majiashan, China

Roughly 248 million years ago, large marine reptiles called ichthyosaurs lived in the seas. Fast forward to 2011 in South Majiashan, China. That’s when a team of researchers found the fossil of an ancient ichthyosaur mother who had been carrying at minimum three offspring. One baby ichthyosaurs was found beneath her body, another half-way out of the birth canal, and the third still inside her.

Initially, this fossil stumped scientists because reptiles have always been known to lay eggs yet this prehistoric marine reptile gave live birth. Moreover, the offspring was coming out head first, as in animals that give birth on land. Scientists postulated that since the ichthyosaurs evolved first on land, it retained the live birthing when it became a marine animal. In general, scientists found that reptiles went back and forth between the two birth methods before settling on egg laying. 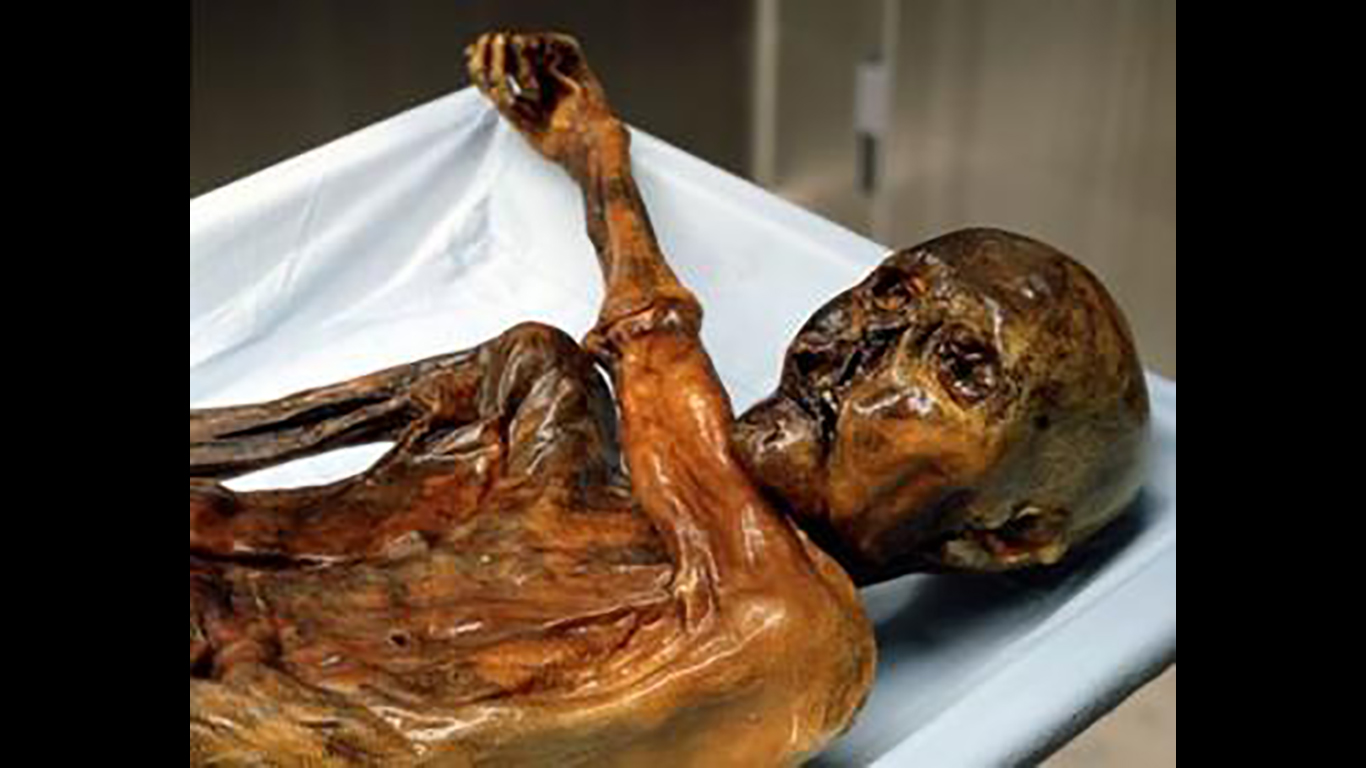 It’s likely that you’ve heard of Otzi the Iceman, otherwise known as Europe’s oldest celebrity. The Iceman was fully clothed in a fur jacket and leather shoes when he was recovered in the Ötztal Alps near the Italian-Austrian border. Two German tourists discovered the corpse trapped in ice in 1991. After carbon-dating tests, the Iceman was found to be over 5,000-years-old — the most well-preserved body ever unearthed from that time period (3350 and 3100 BC).

A series of coincidences helped preserve the Iceman for all of these years. His body tissue maintained some of its elasticity due to the moisture from the snow, which later turned into ice. Also, his body was placed out of range from where the glacier flowed. Finally, he was found shortly after the ice surrounding his head, back, and shoulders had thawed, so he wasn’t exposed to the sun and wind for long. 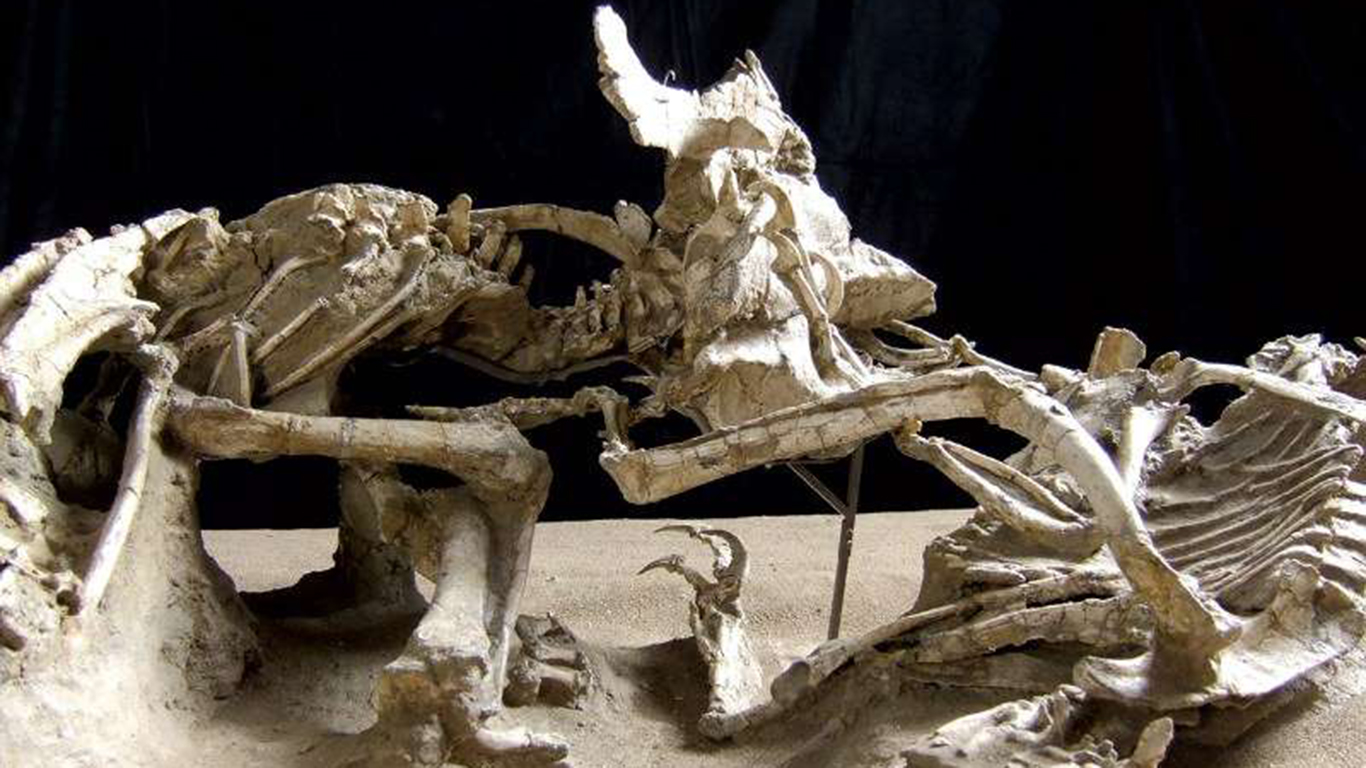 18. Protoceratops and Velociraptor “The Fight Dinosaurs”
> How old it is: 80 million years
> When it was unearthed: 1971
> Where it was excavated: Gobi Desert, Mongolia

In the case of The Fighting Dinosaurs fossil, two dinosaurs were visibly locked in combat. The battle was between the carnivorous velociraptor and the herbivorous protoceratops. The velociraptor planted its sharp claw into a major blood vessel in the neck of the protoceratops. As a defense mechanism, the Protoceratops bit and effectively broke the right arm of its predator. An abrupt sand flow likely buried the creatures, freezing them in this position for 80 million years. It’s one of the only fossils that captures active predation. 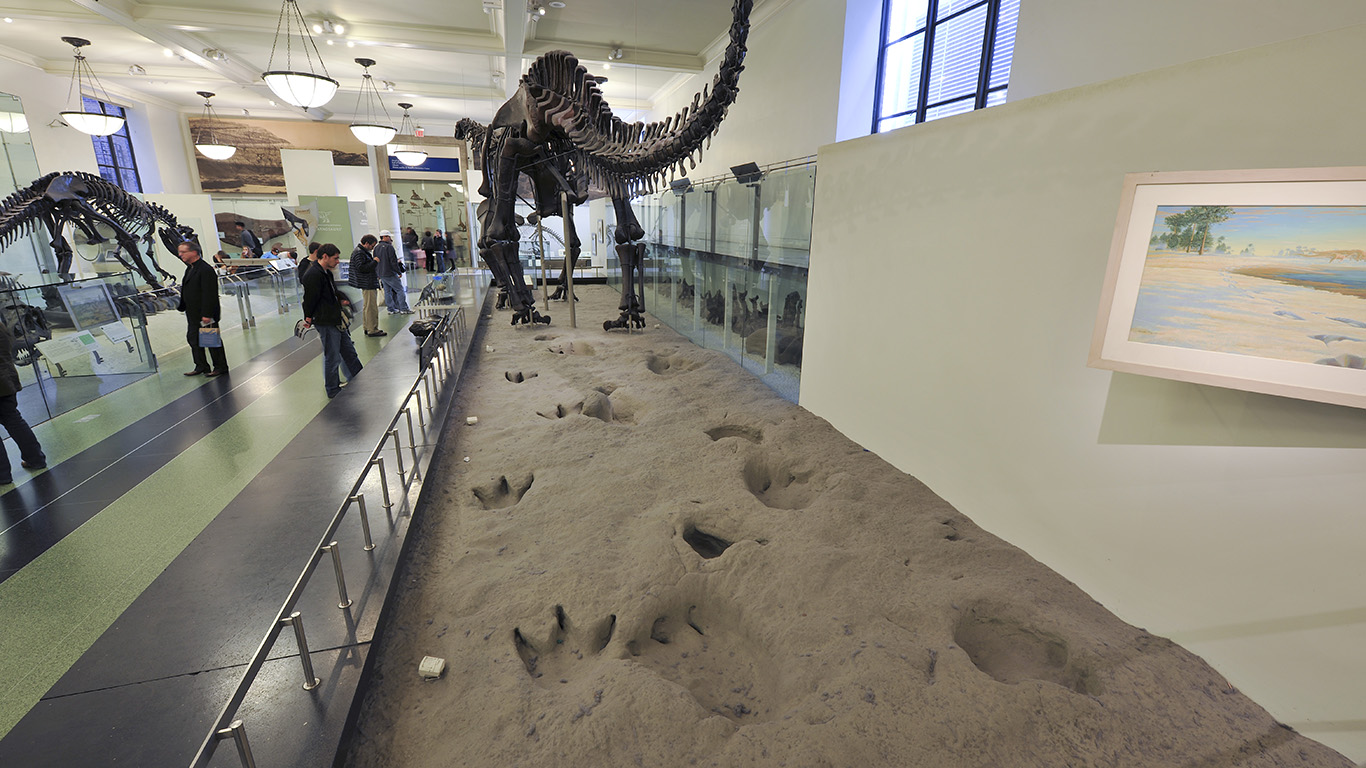 This fossil is undoubtedly different from most. Otherwise known as The Glen Rose Trackway, this fossil captures the trail of what scientists believe to be a type of theropod, the same category a Tyrannosaurus rex falls under, following a giant sauropod. The tracks were discovered at the bottom of the Paluxy River in Glen Rose, Texas. It’s unclear if the theropod attacked the sauropod. What researchers do know is that both creatures turned right abruptly and that there was a drag mark by the sauropod’s right foot and that the final left footprint of the theropod is missing. 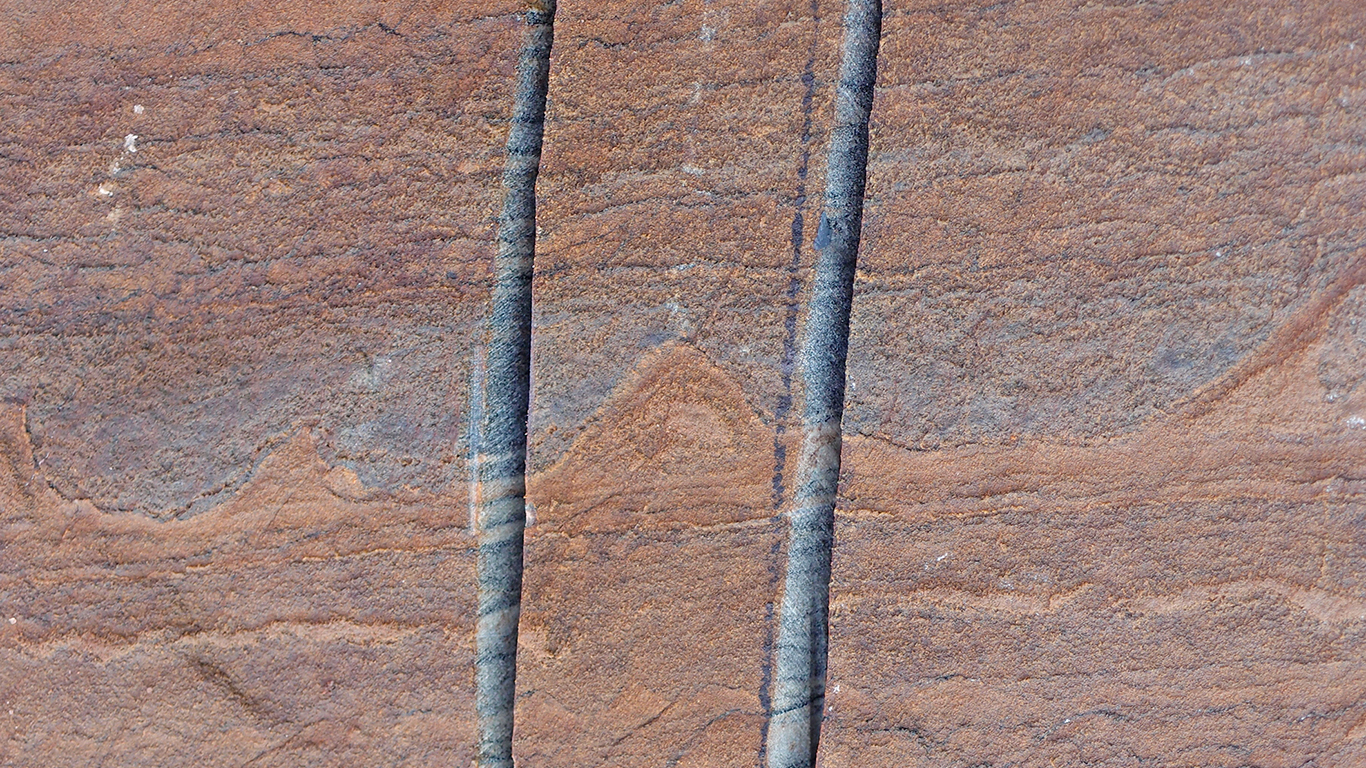 The oldest fossils to date have been unearthed in Greenland. The most recent one shattered the oldest fossil record of 3.48 billion years to 3.7 billion years. Prof. Allen Nutman of the University of Wollongong had been studying the ancient rock formations in Greenland’s Isua Supracrustal Belt for over three decades. Nutman and his colleagues in 2016 claimed they had discovered the remnants of the ancient bacteria stromatolites in 3.7 billion-year-old rocks. However, just this month NASA astrobiologist Abigail Allwood challenged the discovery. Allwood believes the cone-shaped structures in the rocks thought to be the ancient bacteria are actually elongated structures that form via natural movement in tectonic plates.