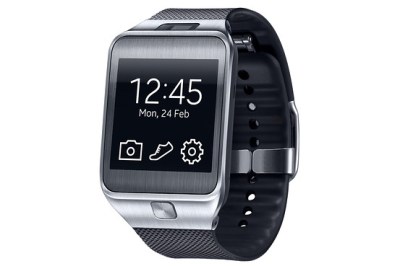 Source: Samsung Electronics
The Mobile World Congress (MWC) has just wrapped up for 2014, and the future is looking decidedly different from today. The saturation of smartphones in to the marketplace is forcing the top IT companies around the world to focus on new and exciting products to reenergize consumers. One thing is for sure, wearables will become the new, hip buzzword. From Google Glass to smartphones on a watch, the next generation of cool stuff is probably right around the corner.

In a new research report from Jefferies, the analysts highlight their meetings and data from the MWC. It is pretty obvious that the last thing major companies with a foothold in top technology want to do is lose their forward progress, especially with their core set of consumers. In their report, the Jefferies team points out four huge takeaways from the conference that are helping to dictate what is coming tomorrow.

Given these four factors, the Jefferies analysts have focused on the companies that are on the cutting edge in being a part of the new frontier. Here are some of the top stocks that will benefit from the continuing mobile march.

Allot Communications Ltd. (NASDAQ: ALLT) already has a couple of customer wins that should start helping in the second quarter, and more so in the last half of the year. The company is a leading global provider of intelligent broadband solutions that put mobile, fixed and enterprise networks at the center of the digital lifestyle and workstyle. Allot’s DPI-based solutions identify and leverage the business intelligence in data networks, empowering operators to analyze, protect, improve and enrich the digital lifestyle services they deliver. The Thomson/First Call price target is $17.10. The stock closed Thursday at $17.13.

Ceragon Networks Ltd. (NASDAQ: CRNT) made our top tech stocks to buy under $10. The company is the number one high-capacity wireless hauling specialist. It provides innovative, flexible and cost-effective wireless backhaul and fronthaul solutions that enable mobile operators and other wired/wireless service providers to deliver 2G/3G, 4G/LTE and other broadband services to its subscribers. The consensus price target for the stock is $4.63. Shares closed Thursday at $3.27.

Hewlett-Packard Co. (NYSE: HPQ) is expected to be a big NFV player going forward. The company has had a remarkable comeback under the leadership of Silicon Valley veteran Meg Whitman. Whitman’s most important point for 2014 is her plan to use free cash flows in order to reduce the existing debt, repurchase new shares and maintain the dividend payout policy. All of this is in the best interest of shareholders. The company’s share in 1 gigabit E fixed switching improved 10 basis points, or 1/10 of 1%, year over year, as it continues to benefit from its local presence and brand name (H3C) in China. Other U.S. vendors are increasingly challenged for new business in the region. Investors are paid a 1.9% dividend. The consensus price target is $31.78, and HP closed Thursday at $29.75.

Nokia Corp. (NYSE: NOK) was a former mega cap European leader. Nokia sold its handset business to Microsoft last year for what was considered a low 5.5 billion euros. Even though it is selling a business representing half of its sales, Nokia’s share price has doubled since the deal’s announcement in early September. Investors may well be more optimistic, but they also have big questions over the future direction of the new Nokia. Nokia recently unveiled the Nokia X, Nokia X+ and Nokia XL entry-level dual-SIM Android smartphones. The devices run on the Android platform but also integrate Nokia’s service applications, such as Bing search, Here Maps and Skype MSN. The consensus estimate is $7.88. Nokia closed Thursday at $7.69.

Sierra Wireless Inc. (NASDAQ: SWIR) stands to benefit from Legato open-source platform increasing machine-to-machine (M2M) adoption. Eventually all Sierra Wireless smart products (i.e., those with app processors) will move from its proprietary Open AT to Legato. The company is the global leader in M2M devices and cloud services, delivering intelligent wireless solutions that simplify the connected world. It offers the industry’s most comprehensive portfolio of 2G, 3G and 4G embedded modules and gateways, seamlessly integrated with its secure M2M cloud services. The consensus price target is $21.31. Sierra Wireless closed Thursday at $20.98.

Qualcomm Inc. (NASDAQ: QCOM) may be on the verge of making its gigantic world even bigger. Smartphone industry expert Tom Kang of CounterPoint believes Lenovo will mainly rely on Qualcomm chips for handsets shipped outside China due to intellectual property reasons. After a nine-month integration period for the Motorola acquisition, Lenovo initially will target the United States and Latin American markets. Investors are paid a 1.9% dividend. The consensus price target for the tech giant is $79.43. The stock closed Thursday at $75.19.

The future is now as far as mobile computing is concerned. More and more people are moving away from the PC for the freedom that mobile provides. That, combined with a slew of new products in the queue, provides investors a chance to get in now, before the mobile move is fully realized.