Source: Brian Solis, via Wikimedia Commons
It is without a doubt that Facebook Inc. (NASDAQ: FB) and founder Mark Zuckerberg hit a home run on their earnings report on Wednesday night. The reaction on Thursday was an increase of more than 7% by mid-day trading. What stood out above and beyond how well the company did was the new top analyst call of the street-high call.

If Jefferies is right in its assessment, Facebook shares could be headed to $100. Prior to this upgraded target and prior to earnings, Facebook’s consensus price target was closer to $78 and the prior street-high price target had been $90. Now it is $100.

The Jefferies Internet team published their report, with five analysts credited. The team reiterated its Buy rating, but that new $100 target price is up from a prior $85 price target.

Jefferies even raised its total 2014 revenue estimates to $11.993 billion from a prior $11.476 billion, versus a consensus of $11.891 billion. The team even raised its earnings per share target for this year to $1.54 from $1.32 prior to the report. Key drivers are that Facebook now has 1.5 million active advertisers, along with growth opportunities across all regions in mobile, Instagram and video ads — plus its new audience network.

ALSO READ: J.P. Morgan’s Top Stock Picks for the Second Half of 2014

More strength is coming from strong user engagement and user trends across all geographies, and that it delivered impressive growth on tough comparisons. The company’s margin expansion engine was also said to be delivering the goods, even if Facebook’s expense loads may increase in 2015.

Facebook posted solid top-line beat but it was the margin expansion that stood out. We note it is impressive that Facebook is delivering this kind of growth without any meaningful contribution from promising go-forward growth levers like Instagram or video ads. Given Facebook’s ever-deepening ties to eCommerce we think the company looks well positioned to capitalize on strong holiday shopping trends during the fourth quarter.

Facebook shares were up more than 7% at $76.35 right after the noon point on Thursday, and on almost 85 million shares. The stock even hit a new all-time high of $76.90 earlier in the morning. Jefferies believes that Facebook shares can go much higher — to $100! Here were just a few other analyst calls, and there were more:

The graph and images from Facebook below should show the growth to date. 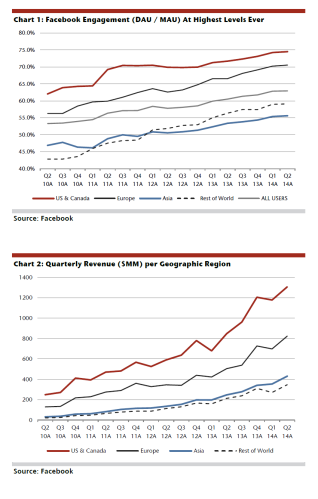