The demand for cars this year has been extraordinary. This could be because of pent-up demand from the COVID-19 pandemic. For several weeks, or longer in some places, people could not visit dealers. Meanwhile, the incomes of many middle-class and upper-class Americans actually rose over the same period. Despite the brief recession, most of these people kept work and increases in the stock market and home prices increased their assets.

However, car supply plunged in that time. A tremendous shortage of the semiconductor chips used in auto electronics systems is almost exclusively the cause of this drop. As car inventory dwindled, prices soared.

Yet another change is that more people now shop online for cars. Nearly 90% of Americans do internet research before they buy a car, according to one study. The use of the internet in car shopping has evolved even more. A full 30% of car buyers completed their purchase transactions online in 2020. ABC News reports that, before the pandemic, less than 2% of vehicles were purchased digitally.

One thing that has not changed is the extent to which car buyers look for experts to rate cars. Car and Driver, Motor Trend and other media have been rating cars for consumers for decades. Research firms like Edmunds and Kelley Blue Book have provided similar services. The gold standard of these ratings is J.D. Power, which releases results of several large studies per year.

The J.D. Power 2021 U.S. Automotive Performance, Execution and Layout (APEAL) Study was released Wednesday. It results are based on a survey of 110,827 owners of new 2021 model-year vehicles after 90 days of ownership. The study was fielded from February through July 2021. This is the 26th year this specific research report has been issued.

The researchers defined the methodology as measured by “owners’ emotional attachment and level of excitement with their new vehicle. The APEAL Study asks owners to consider 37 attributes, ranging from the sense of comfort they feel when climbing into the driver’s seat to the exhilaration they get when they step on the accelerator.”

The total number of points a car brand can receive is 1,000. Vehicles were divided into two groups: premium and mass market. The average score among premium models was 864. Among mass-market cars, the comparable figure was 845. The luxury brand with the worst rating was Infiniti, the luxury division of Nissan, which received a score of 842. The mass-market car brand with the worst number was Chrysler at 826.

Chrysler was founded in 1925. For decades it was one of the Big Three U.S. car companies, along with General Motors and Ford. It is currently owned by European-based manufacturer Stellantis. Sadly, what was once a large model lineup is down to three. Two, the Pacifica and Voyager, are minivans. The other, the 300, is a midsized sedan. 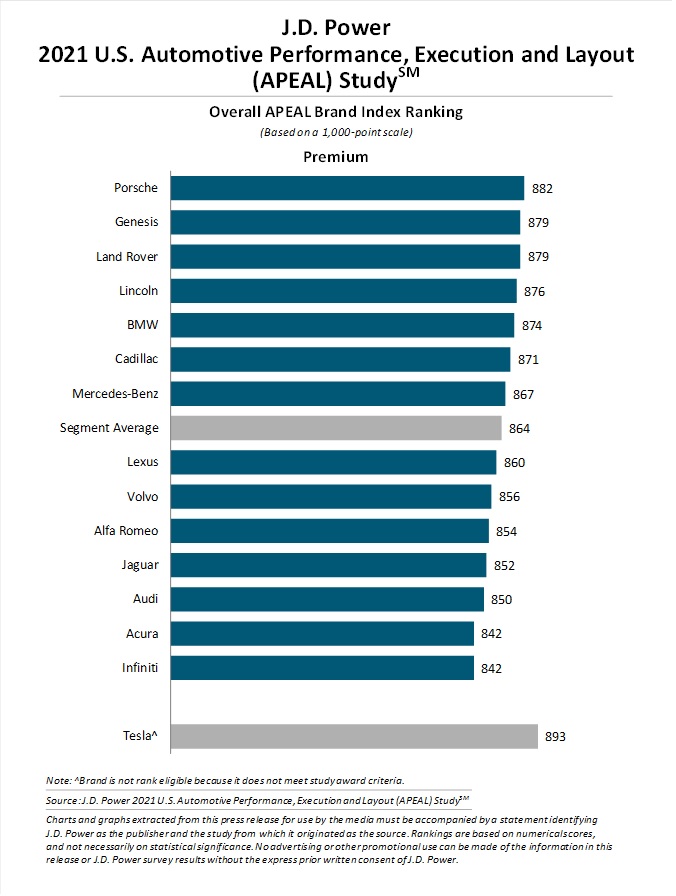 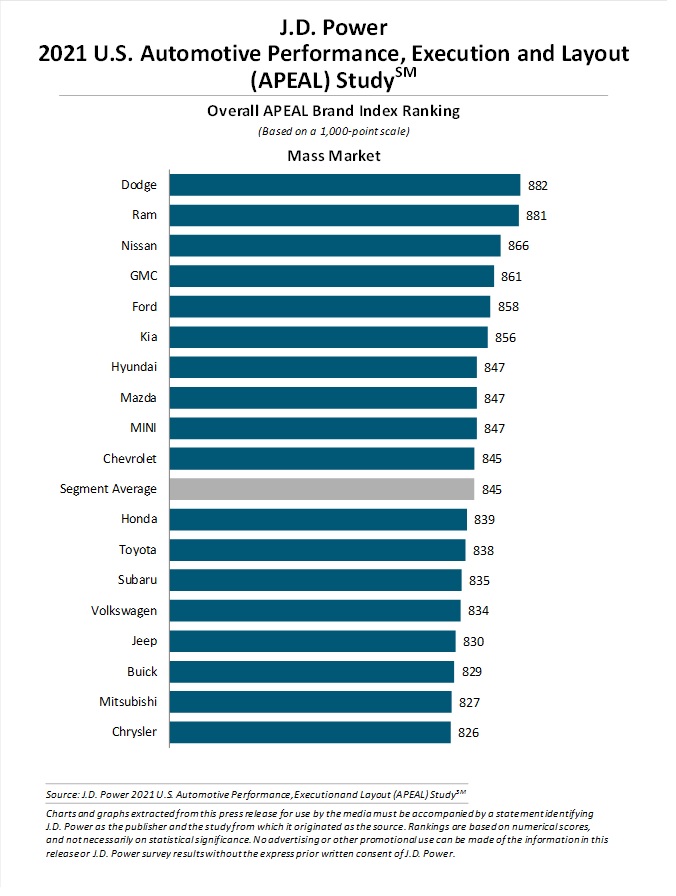 Click here to see which is the worst car brand in America.