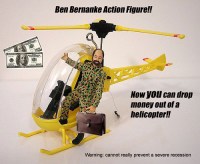 Today’s Federal Open Market Committee decision on interest rates was never really about rates.  How could it be? The reality is that Ben Bernanke and friends at the FOMC have already had short-term interest rates at or near zero for so long that about all the FOMC can do is to cut the discount rate or to press for other measures.

What Wall Street was looking for was what the overall bias is now inside the Fed.  This would offer clues over what sort of additional quantitative easing measures or what sort of stimulus the FOMC was considering. Is that more of Operation Twist? An expanded Operation Twist?  A press to penalize excess reserves at banks?  The majority was not calling for a new round of bond purchases, but the language of how much slowing is recognized was expected to set a prelude for what the FOMC could do in September.

Our take was that today’s formal FOMC announcement was about considering rather than doing! That was our take at any rate.  Many market pundits want more QE measures while others want the fake fiat money climate to be allowed to adjust on its own.

The market has been a bit undecided until about a week ago that global policy-makers were willing to do much to stop the blood-letting from Europe’s meltdown and from the pain coming from a slowing China, BRIC, and other emerging markets. Now the market believes and wants to keep believing that outside policymakers will indirectly come to the rescue of Europe.

So here is what the tale of the tape looks like from the FOMC statement:

The FOMC will closely monitor the situation as activity has decelerated somewhat in the first half and as employment has slowed.  The Fed calls for only a slow improvement in the unemployment rate, and expects that the economic growth will remain moderate and pick up very gradually.  Most important is that the FOMC sees exceptionally low interest rates to continue through at least the end of 2014.  The FOMC will continue with Operation Twist and noted that global financial strain poses a significant risk.

The promise was made that the FOMC will provide additional easing measures as needed to promote the recovery but the long and short is that no new policy steps were really taken.

Here are the guts of it all: “The Committee will closely monitor incoming information on economic and financial developments and will provide additional accommodation as needed to promote a stronger economic recovery and sustained improvement in labor market conditions in a context of price stability.”