The World Is $199 Trillion in Debt, and Growing

Source: Thinkstock
The world’s economies may have improved since the financial crisis, but now more than ever, the world is drowning in higher and higher debt. A new report from the McKinsey Global Institute suggests that the world has added a whopping $57 trillion in debt since the financial crisis. The firm pointed out that all major economies currently have higher levels of borrowing relative to gross domestic product (GDP) versus the year 2007, right before the Great Recession and financial crisis. The net global debt added since then is now projected as a ratio of debt to GDP to be up 17 percentage points.

McKinsey’s report highlighted three areas of emerging risk that all of this new debt poses. First is the rise of government debt, and second is the continued rise in household debt — and housing prices — to new peaks in Northern Europe and some Asian countries. Third is the quadrupling of China’s debt.

Before you think that this ballooning debt applies only to governments, it does not. This also applies to households, corporations and financial-related debt.

McKinsey further warns that global household debt is reaching new peaks. It was only in nations like the United States, the United Kingdom, Ireland and Spain where households have actually deleveraged since the financial crisis. The total household debt in other nations, including the household debt-to-income ratios, have continued to rise. These nations with higher debt were said to include nations such as Australia, Canada, Denmark, Sweden, the Netherlands, Malaysia, South Korea and Thailand.

As the first image below shows, government debt has grown by $25 trillion in seven years. The research warns:

It (debt) will continue to rise in many countries, given current economic fundamentals. Some of this debt, incurred with the encouragement of world leaders to finance bailouts and stimulus programs, stems from the crisis. Debt also rose as a result of the recession and the weak recovery. For six of the most highly indebted countries, starting the process of deleveraging would require implausibly large increases in real-GDP growth or extremely deep fiscal adjustments. To reduce government debt, countries may need to consider new approaches, such as more extensive asset sales, one-time taxes on wealth, and more efficient debt-restructuring programs.

Globally, the scariest figure by far has to be that China’s debt has quadrupled since 2007. This was driven by real estate and shadow banking, up to 282% of GDP. If you want to put this in perspective, this figure is larger than the United States or Germany.

McKinsey’s three warnings on China are as follows: half of all loans are somehow linked to China’s overheated real-estate market; unregulated shadow banking accounts for nearly half of new lending; and the debt of many local governments is probably unsustainable. The only good news is that China’s government is believed to have the capacity to bail out the financial sector if a property-related debt crisis develops.

A second image highlights just how much this is in terms of total debt to GDP for some of the major nations, but that debt includes government, financial institutions, corporate (non-financial) and households.

Anyhow, arguments of this sort can carry on forever. It is ultimately hard to know how the unwinding of all this debt will occur. Four paths to begin government debt deleveraging were identified as follows: make fiscal adjustments to reduce or eliminate fiscal deficits, accelerate GDP growth through productivity improvements, raise inflation targets or restructure debt. 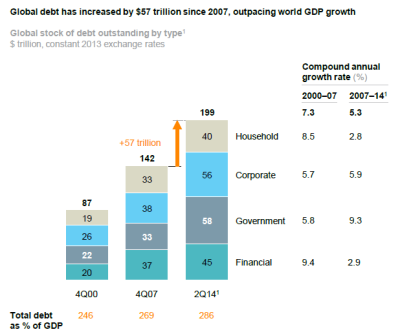 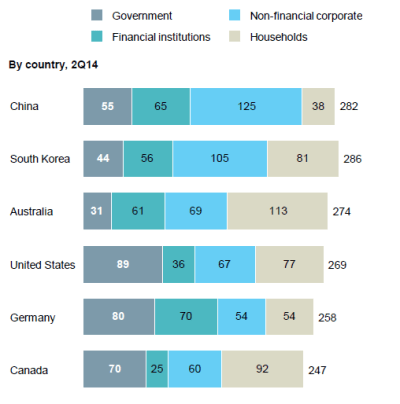