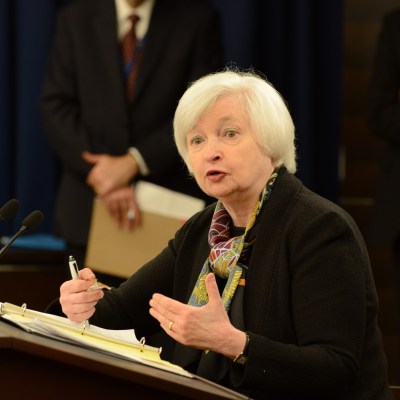 Source: Wikimedia Commons
Federal Reserve Chair Janet Yellen gave testimony before the U.S. House of Representatives Committee on Financial Services in Washington, D.C., on Wednesday morning. While this is a testimony on supervision and regulation rather than monetary policy, the reality is that this points toward more regulation and capital reserves for the major, too big to fail banks — and perhaps less for regional banks deemed non-systemic.

Yellen started out noting that one of the Fed’s fundamental goals is to make sure that the regulatory and supervisory program is tailored to the risk that different financial institutions pose to the system as a whole. After all, we already witnessed how a lack of regulation and supervision destabilized the financial system and undermined the real economy.

Yellen’s testimony went to show that the financial system’s largest and most complicated firms must be subject to prudential standards that are more stringent than the standards that apply to other firms. Keep in mind, there has been some chatter of late that more capital requirements would be there for the larger banks.

As far as why the smaller banks might not be subject to even more regulation and capital requirements, Yellen said:

Small and medium-sized banking organizations–whose failure would generally pose much less risk to the system–should be subject to standards that are materially less stringent.

As far as the need for more capital and regulation on the top banks, Yellen’s testimony said:

We have implemented key standards designed to limit the financial stability risks posed by the largest, most complex banking firms. We continue to work on some remaining standards and to assess the adequacy of this package of measures. With respect to small and medium-sized banks, we must build on the steps we have already taken to ensure that they do not face undue regulatory burdens. Looking forward, we must continue to monitor for the emergence of new risks, since another key lesson from the crisis is that financial stability threats change over time.

And there is an admission that the Fed is considering broader regulation or requirements on stress and capital tests. Yellen said:

While our stress testing program has been successful since it was first introduced in 2009, the crisis reinforced the need for regulators and supervisors to continually revisit the effectiveness of their tools and adjust as needed over time. We therefore launched a review of the Comprehensive Capital Analysis and Review (CCAR) program last year with the aim of re-assessing our stress testing practices on a comprehensive basis. As part of this process, we met with a wide range of stakeholders, including academics, analysts, bankers, public interest groups, and others. We are now considering making several changes to our stress testing methodology and process.

We are also considering making certain changes to the stress test assumptions used in CCAR. For example, under the current CCAR program, a firm’s capital adequacy is assessed by assuming that the firm continues to make its baseline capital distributions over the stress test’s two-year planning horizon. We are considering changing this conservative assumption, in significant part because of the advent of the capital conservation buffer in the regulatory capital rules, which limits the ability of a firm to make capital distributions when its capital ratios are lower than the buffer requirement. Instead, we are proposing that firms simply add one year of planned dividends to their stress capital buffer requirement in recognition of the fact that firms generally are more reluctant to reduce dividends than share buybacks. On this and other changes to CCAR that we are considering, we will of course seek public input before moving to adopt them.

While there is a $50 billion threshold in some metrics, Yellen said that the Fed is considering exempting from the qualitative portions of CCAR any bank that has less than $250 billion in total assets and that does not have significant international or nonbank activity.

Yellen warned of additional actions in her conclusion:

As I have discussed, we anticipate taking additional actions in the near term to further tailor our regulatory and supervisory framework.

This Is the World's Safest Country