Whether an investor, a business owner or an average working person, every single one of us has to worry about the broad economic trends. We can all remember the pain of the Great Recession. In fact, the recession was only a good thing for those few institutions and individuals with the excess capital and foresight to bet against the economy. One key barometer of the economy is how everyday people are managing their finances from month to month.

Whether credit lending standards have loosened too much remains up for debate. When comparing the bank card default rate among the four Censes divisions, S&P/Experian showed that the default rate in the South is considerably higher than the other three Census divisions. The East South Central Census Region (Kentucky, Tennessee, Alabama and Mississippi) had the highest bank card default rate. Those states were also pointed out as having some of the lowest median household incomes.

The peak default rate on bank-issued credit cards was 9.15% in April of 2010, and the lowest trough was a mere 2.49% default rate in December of 2015. All in all, credit default trends should be far from alarming. The ultimate verdict here on consumer credit and what it means to the broad economy will be on what happens to delinquencies and to eventual defaults in the stronger parts of the United States.

Bank cards where borrowing money requires simply swiping a credit card are experiencing rising defaults, while defaults on other kinds of consumer credit which depend on paperwork are flat or down. Default rates on bank cards are at the highest level since May 2013, four years ago. In the past, default rates began to climb around the same time the growth of bank card credit outstanding began to slow. The year-over-year growth of bank card credit outstanding peaked at 6.8% last November and was at 5.7% in April, the latest figure available. Bank card defaults rose from 2.81% in November to 3.35% in April, and up to 3.53% in May.

Blitzer also differentiated how credit cards look rather different from auto and mortgage loans. He even noted that some of the subprime car loan risks have started to improve. He said:

Default rates for auto loans have drifted down in the last four months. At the beginning of the year there were reports of a sub-prime crisis in auto loans; these concerns seem to be behind us. The default rate on first mortgage remains at 1%, lower than the pre-crisis period. Rising home prices and increases in the equity mortgage borrowers have in their home are helping lower default rates. One factor in the difference between rising bank card defaults and stable defaults on mortgages and autos may be the difference in interest rates: about 4% on mortgages and 4.4% on auto loans, compared to 12% to 18% on bank card loans.

Experian uses a massive pool of banks and mortgage companies to compile its data. It covers approximately $11 trillion in outstanding loans, and that data is sourced from 11,500 lenders. 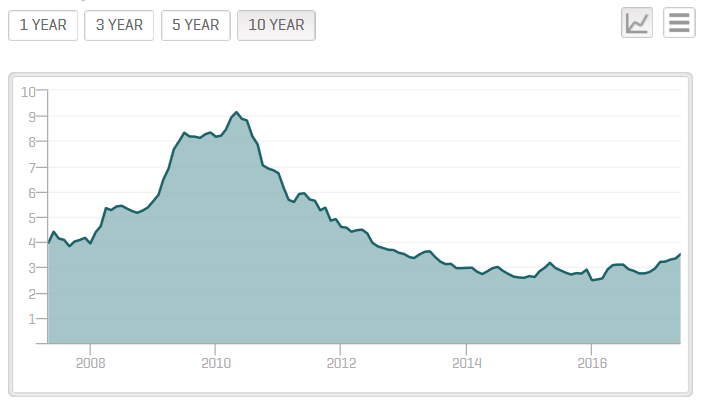