Across the Rust Belt, between 2000 and 2010, this trend turned into a tsunami. Across six Great Lakes states, manufacturing employment dropped by 35 percent in 10 years—a more dramatic decline than during the Great Depression—eliminating 1.6 million jobs.

The wider impact on employer-provided benefits and the safety net protecting workers was devastating. The number of working-age Americans without health insurance jumped from 24 million to 37 million between 2001 and 2010, before the Affordable Care Act. Employer-provided defined benefit pension plans largely disappeared in the private sector, replaced by defined contribution 401(k) plans that shifted the burden for funding retirement onto workers. By 2015, only 5 percent of Fortune 500 firms offered defined benefit pension plans, down from 50 percent in 1998. Public employee agreements were harder to dismantle, but the underfunding of these state and local plans hit $1.4 trillion in 2016. Access to unemployment insurance (UI) diminished: In 2016, only 27 percent of all unemployed workers qualified for and received UI benefits, the lowest proportion in 40 years.

The Disruption Will Continue

As employers adapted to survive, their strategies to cut costs, enhance productivity, and shift risk heightened the instability of many Americans’ employment arrangements. They also set the stage for more disruption in the years ahead—change that will continue to hit Midwestern workers and communities particularly hard.

First, improvements in process automation, robotics, and machine learning are destabilizing employment. The McKinsey Global Institute projects that as many as one-third of U.S. workers may need to change occupations and acquire new skills by 2030, as robotics and artificial intelligence eliminate routine and repetitive jobs and create new jobs that require more and different skills.

The Midwest is at the epicenter of these shifts. Auto manufacturing uses half of all industrial robots in this country. Robots on the shop floor are concentrated in about 10 Midwestern and Southern states, led by Michigan, Ohio, and Indiana. 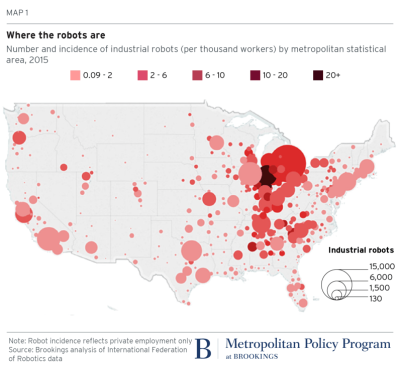 Second, low educational attainment among the region’s industrial workforce could exacerbate employment dislocation due to automation and digitalization. A comparatively high proportion of Rust Belt working-age adults have only a high school diploma. Such workers may face greater difficulty making the transition to new kinds of occupations that demand higher-order cognitive skills.

A third destabilizing shift is the movement away from long-term, stable, full-time jobs toward contingent, alternative work arrangements. According to one study, nearly all net employment growth between 2005 and 2015 came from contingent work. In 2015, the Government Accountability Office estimated that contingent workers, including independent contractors and freelancers, part-time workers, on-call workers, temp firm employees, and self-employed workers, accounted for 40 percent of the U.S. workforce, up from 30 percent 10 years earlier.