Democracy Is Worth 20% of a Country's GDP, Research Shows

Which political system generates more economic growth, a democracy or a non-democracy? Democracies are messy, with increasingly loud claims by an increasingly large number of groups seeking support for their views. Non-democracies just take care of business by imposing whatever political or economic policy the governing cabal wants to adopt.

The conventional wisdom, according to a new paper, “Democracy Does Cause Growth” by economists Daron Acemoglu, Suresh Naidu, Pascual Restrepo and James A. Robinson, is that democracy not only doesn’t have any impact on economic growth but that the net effect of democracy on growth is zero, at best. Put another way, “democracy is a constraint on economic growth.”

The researchers looked at a group of countries for the 50-year period between 1960 and 2010 and concluded that as countries transition from non-democratic states to democratic ones, gross domestic product (GDP) per capita rises by about 20% over the following 25 years. The effect, they say, does not depend on the initial level of economic development, although there is some evidence that higher levels of secondary education help new democratic economies grow.

The following chart from the research paper shows GDP per capita both before and after democratization (year 0 in the chart). 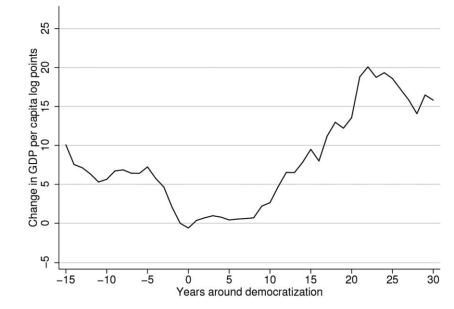 The researchers admit that establishing a causal effect between democracy and GDP faces several challenges. First, measuring existing democracies is “subject to considerable measurement error.” Second, democracies differ from non-democracies in a number of “unobserved characteristics” that also affect GDP. Third, as the chart shows, democratization is preceded by a temporary dip in GDP and that may be due to a failure to model GDP dynamics properly. Finally, “even if we control for country fixed effects and GDP dynamics, changes in democracy could be driven by time-varying unobservables related to future economic conditions, potentially leading to biased estimates.”

Four strategies are enumerated to address each of these challenges, and three arrive at a similar conclusion: democratization increases GDP by about 25% in 25 years. When the researchers addressed the fourth challenge, their findings were “less clear-cut,” suggesting “that democracy contributes to growth by increasing investment, encouraging economic reforms, improving the provision of schooling and health care, and reducing social unrest.”

Their conclusion: “Taken together, our results suggest that democracy is more conducive to economic growth than its detractors have argued and that there are many complementarities between democratic institutions and proximate causes of economic development.”

Not everyone is sold on these results. Alex Tabarrok, a professor of economics at George Mason University and a contributor to the Marginal Revolution blog, for one, is not impressed: “Twenty percent is better than nothing and better than dictatorship but it’s weak tea. … The literature on democracy and growth implies that there is no reason to reject an alternative history in which the world’s leading industrial economy was a nondemocracy.”

China’s unprecedented growth over the past quarter century has been showing signs of cooling off, but the country’s growth continues to be more than double that of the United States: 6.6% compared to 2.9% in 2018. Since 2010, however, China’s GDP growth rate has fallen from 10.64% while U.S. growth has risen modestly from 2.56%. Like all things that can’t last forever, double-digit annual GDP growth didn’t.