We’ve all heard the nostrums: every crisis is also an opportunity; don’t waste a major crisis. These long-term formulas are difficult to square with the immediate problem of surviving a current crisis. If the COVID-19 pandemic is a global crisis, what are the risks and the opportunities that await?

The World Economic Forum (WEF) on Tuesday released a new report, COVID-19 Risks Outlook: A Preliminary Mapping and Its Implications, based on an April survey of 347 risk specialists in business, government, society and academia. Respondents were asked to choose eight risks from a list of 31 addressing three questions concerning the effects of the pandemic over the next 18 months: what is the most likely fallout from the pandemic; what should be of greatest concern to the world; what is most worrisome for your company.

More than two-thirds of respondents (68.6%) say that a prolonged global recession is the most likely fallout from the pandemic. Bankruptcies at large and small-to-medium size enterprises (SMEs) and a “wave of consolidation” were the second-greatest risk (56.8%), followed by the failure of industries or sectors to recover in some countries.

Piled on top of recession risk is the rising burden of public debt related to the various stimulus programs governments have instituted to ease the burdens of lost jobs and wages. The WEF said that it expects global public debt to rise from 105% of gross domestic product in 2019 to 122% in 2020. According to the group: “Most governments are likely to face increasingly burdened budgets for many years, others may face a structural weakening of their fiscal positions, and some could become at risk of defaulting.”

The survey noted that the expanded role governments played in trying to ensure “economic hibernation” to give health systems time to fight the pandemic, concluding that it has “become clear that governments that had previously invested in healthcare, digital infrastructure, safety nets and active labour market policies have fared better than those that did not have such systems in place.”

The following chart from the report shows the size of the fiscal response from several countries as a percentage of that country’s GDP. 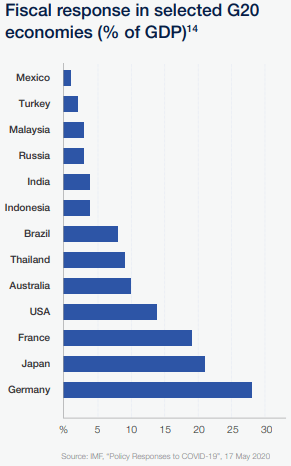 The lockdowns associated with the pandemic are expected to reduce global emissions by 8% this year. The WEF reports that the latest research suggests that air pollution increases the mortality from COVID-19 by 15%. Still, “as economies restart after the Great Lockdown, there is a risk of underinvestment in the green agenda and a prioritization of economic recovery ‘at all costs’.”