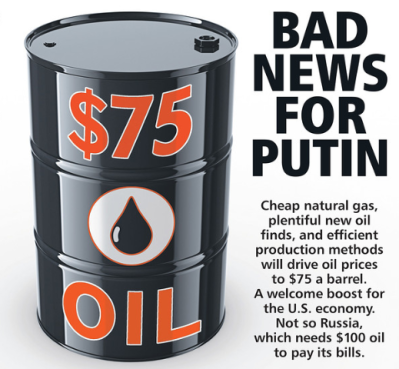 Source: Barrons.com
The oil industry may feel picked on by Barron’s of late. Master limited partnerships (MLPs) were not exactly given the biggest welcome mat in a piece about Kinder Morgan Inc. (NYSE: KMI). Now Barron’s has its weekend cover story being about how oil will fall to $75 from $100. While anything can happen in trading levels in the markets on a daily or weekly level, this just doesn’t jive with the economics and forecasts.

The Barron’s shift to $75 oil is really subtitled “Bad News For Putin,” and it is based upon plentiful new oil finds and more efficient production methods. The report contends that this will all be a boost for the U.S. economy, but this is bad news for Russia as it needs oil at $100 to pay its bills.

24/7 Wall St. is not really targeting the Barron’s article per say here, but we have focused recently around $100 oil being the new norm that prices either rise from or fall from. The reality is that this $100 level may really be $95 or somewhere around there, but it is likely a far cry from $75.

Production costs have been much higher than a decade ago, and many oil companies simply will mothball many oil fields at $75 per barrel. Those ultradeep water wells and many of the tight shale formations on land just won’t work at $75 per barrel. Another issue is that the global economy has been and remains weaker than what everyone was hoping for a year ago. Oil was around $101 at the end of the week. Over the last two years, oil only managed to get under $85 once for a very brief time (see chart below).

Chevron Corp. (NYSE: CVX) CEO John Watson recently told a Houston audience that crude oil running $100 per barrel is becoming the new standard in the oil and gas industry — and that consumers will pay more than they used to. Merrill Lynch just recently upgraded shares of BP PLC (NYSE: BP) and Exxon Mobil Corp. (NYSE: XOM) with Buy ratings. They were targeting close to 20% expected total returns in their calls, when you include dividends. These two Buy ratings would almost certainly not be in place if they thought oil would go to $75 and stay there.

One thing to consider here on a broad macroeconomic basis is that the $101 price of today is when China remains weak, Brazil is growing at what feels like a snail’s pace, India remains weak, turmoil in the Middle East is at somewhat normalized levels, and Europe remains weak.

Over the last 12 years or so, one estimate was that production costs rose fourfold — while production rose only 11%. Chevron, Exxon Mobil and Royal Dutch Shell PLC (NYSE: RDS-A) have all announced significant reductions in capital spending over the next several years. They are simply trying to bring spending in line with revenues. That could change if demand climbs again.

One wild card be if crude oil exports become legal. This could create yet another black gold rush, which could last for several years. Our own Paul Ausick recently wrote,

“U.S. oil producers argue that removing the ban on oil exports will help them to recover their rising costs because they can charge more for the crude. That will be true for two or maybe three years, but again crude prices will settle around a level where demand and supply once more become roughly equivalent.”

In some cases, oil is no different than the plunging price of gold. Gold miners will simply idle production at its more costly operations and focus on lower cost production that is easier to get to. This can drop supply drastically, which can stabilize the price or make it rise again. Oil producers will simply give up on more expensive oil production projects.

Our take is that for $75 oil as a benchmark to happen, the global economy has to tip backward into even slower growth (or worse) AND that a change to natural gas engines for the US truck fleet has to occur. T. Boone Pickens has been a huge proponent for this effort, and it is one reason we pointed out earlier in the year that Westport Innovations Inc. (NASDAQ: WPRT) could actually double again. Until better hope of a natural gas trucking fleet is possible, this remains a long shot. Barron’s contends that internal combustion engines can now be run efficiently on alternative fuels (including gas).

The rise of electric cars is another consideration, but this effort is still running very slow. Total U.S. sales of electric and plug-in hybrid vehicles was up more than 80% in 2013, but this was still not quite 100,000 units. Total US car sales rose by about 8% to 15.6 million units in 2013.  What is interesting is that Barron’s, also in this weekend’s print edition, said that Tesla Motors Inc. (NASDAQ: TSLA) is too ambitious in its Gigafactory ambitions for lithium electric battery ambitions. Tesla’s Gigafactory ambition is to be able to produce enough for 500,000 units a year – by 2020.

And what about oil sands in Canada contributing to the oil supply? These projects are feasible at $100, but, at $75, many projects will simply be money-losers. Can the Keystone Pipeline make a difference? Sure, if it ever happens.

The case for alternative energy and renewable energy is growing handily here each day. This might not drive those small-cap stocks 10,000% higher, but it builds a base for the ones with a proven model. The argument for renewables and alternative energy might not just be for the sake of carbon emissions either. If oil prices remain high or rise, alternative energy projects will simply be driven more and more by economics. First Solar Inc. (NASDAQ: FSLR) just announced new record-breaking efficiency, which drives down the cost.

So, is $100 the new benchmark in oil? Maybe not, but $95 may be. If that is not the norm, then $90 is likely the new benchmark that prices will rise or fall from. The chart provided here by Ino looks like $95 has been the real pivot over the last two years. Prior to that, we had that nasty recession and recovery that sent prices much lower, but even before that we had the oil boom of 2007 to 2008 that sent prices to Pluto.

All things considered — and admittedly glossed over quickly — $75 as the new trading average for oil that Barron’s pointed out should be closer to $95. 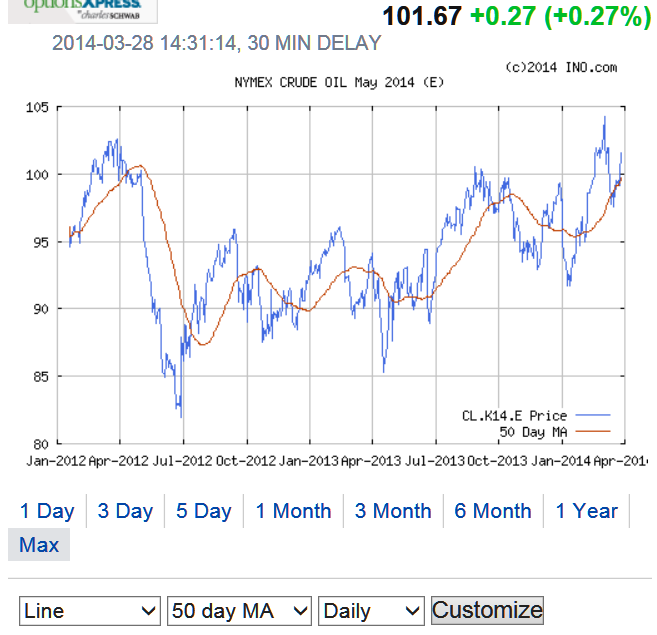