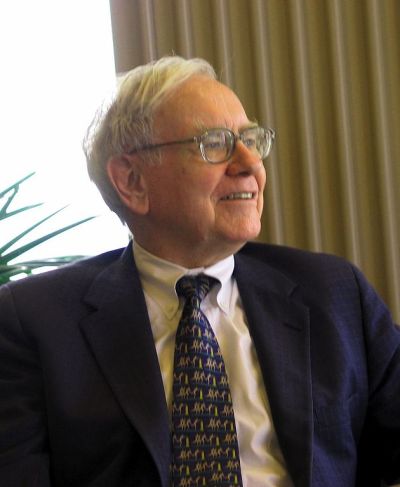 Source: Mark Hirschey / Wikimedia Commons
Berkshire Hathaway Inc. (NYSE: BRK-B) (NYSE: BRK-A) and Warren Buffett have just released their most recent U.S.-listed equity holdings. Many changes had been made in the June quarter and Mr. Buffett had already said that Berkshire Hathaway had accumulated more shares. The cut-off and as-of date for the holdings below is September 30, 2012 unless noted individually.

Portfolio managers Todd Combs and Ted Weschler are getting more and more entrenched as far as their ability to add to positions. It should also be mentioned that Warren Buffett was out for much of the summer for his prostate cancer treatment. While the net dollar amounts were not much different, the number of changes here were very significant.

Coca-Cola Co. (NYSE: KO) was more than 400 million shares, which is about double the number of shares before but that is because of the stock split. Treat this as the SAME AS BEFORE.

DaVita Inc. (NYSE: DVA) is now more than a 10% stake and has grown from 9.3 million shares as of June 30, 2012 and higher than the 6 million reported as of March. Furthermore, the stake listed as of 9/30 is irrelevant. Recent filings have shown that Berkshire keeps buying more and more shares on the open market. A filing on 11/13/2012 showed that over the prior few days that some 548,823 shares had been purchased at an average of $112.15 and that the indirect ownership by Berkshire Hathaway was 11,748.045 shares.

Deere & Co. (NYSE: DE) was listed as NEW POSITION of about 4 million shares.

Gannett Co. (NYSE: GCI) was 1.74 million, SAME AS BEFORE but decreased in prior quarters.

General Dynamics Corp. (NYSE: GD) is the SAME AS BEFORE at 3.877 million shares after being a new position before.

General Electric Corp. (NYSE: GE) is a MUCH LOWER STAKE at 588,900 shares versus 5.008 million shares last quarter and versus 7.777 million shares the quarter before.

Johnson & Johnson (NYSE: JNJ) was a MUCH LOWER POSITION again at just under 500,000 shares. This is down from 10.33 million shares last quarter and versus about 29 million shares the prior quarter. The peak was way up at 62 million shares.

Lee Enterprises Inc. (NYSE: LEE) was an ALREADY REDUCED down to 1.13 million shares from 3,225,822 shares shown initially. This was one that Buffett had asked for confidentiality treatment on in his newspaper endeavors.

Liberty Media Corp. (NASDAQ: LMCA) is a the same at 5.5 million shares versus, but that was lifted last quarter from the prior two quarters.

MasterCard Inc. (NYSE: MA) was 405,000 shares, the SAME AS last quarter but up from two quarters before that.

Moody’s Corp. (NYSE: MCO) was 28.4 million; SAME AS last quarter but way down from prior quarters and years.

Phillips 66 (NYSE: PSX) was the SAME AS LAST QUARTER at about 27.1 million shares, but this was a new position last quarter even though it had been telegraphed.

Procter & Gamble (NYSE: PG) was 52.8 million shares, LOWER THAN BEFORE and a steady shrinking position in recent quarters from a peak of 96.3 million shares.

Sanofi-Aventis (NYSE: SNY) was 4.06 million shares; SAME AS before.

Torchmark Corp. (NYSE: TMK) was more than 4.2 million, SAME AS last quarter after having been raised in a prior quarter.

United Parcel Service (NYSE: UPS) was ALMOST ELIMINATED ENTIRELY down to 59,400 shares from 261,900 shares last quarter and versus 1.429 million shares two quarters ago.

WABCO Holdings Inc. (NYSE: WBC) is a NEW POSITION of about 1.6 million shares but that is less than $100 million.

Washington Post (NYSE: WPO) was over 1.72 million shares; SAME AS before.

Wells Fargo & Co. (NYSE: WFC) was HIGHER YET AGAIN at over 420 million shares more than 394.3 million shares last quarter. Buffett keeps growing this stake and he telegraphed that he had.

CVS Caremark Corp. (NYSE: CVS) had been smaller before and it has now been eliminated entirely from prior holdings of just over 5.3 million shares and then 7.106 million shares two quarters ago.

Ingersoll-Rand (NYSE: IR) has now been entirely eliminated as we expected. Berkshire was down to on 20,400 shares last quarter versus 636,600 shares in the first quarter.   We would note that the total value of today’s public equity holdings was listed as over $75.3 billion, which is up from $74.32 billion last quarter and virtually the same as the $75.3 billion the prior quarter.