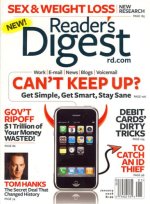 Reader’s Digest was once the most widely read magazine in the world.  According to the company, it still may be when its overseas editions are taken into account.  Last August, the company took its US operations into Chapter 11 to decrease debt. It emerged from bankruptcy in February with $525 million in exit financing. The company cut the number of issues it publishes a year from twelve to ten last year. It also cut its circulation guarantee for advertisers to 5.5 million copies from 8 million. It would have been unthinkable just a few years ago that a magazine as old and famous as Reader’s Digest would be shuttered. Iconic titles like House & Garden have been closed, Newsweek is for sale. BusinessWeek might have been closed if Bloomberg had not bought it for next to nothing. The parent of Reader’s Digest has a number of niche magazines, such as  Every Day with Rachael Ray and Taste of Home. The company’s book and music businesses reportedly also do well. Reader’s Digest also has 50 editions of its flagship magazine published around the world. But, if the trends in the US publishing industry have show anything, it is that large, widely circulated magazines like Newsweek, US News, and TV Guide have no future in America in their current form. Reader’s Digest may live on outside the US and its parent company may survive. However, Reader’s Digest as it is known in the US will be gone.

Blockbuster, Inc. (NYSE: BBI) was the national leader in the video rental business for nearly two decades. Now it is contemplating Chapter 11 to eliminate debt. This news pushed the company’s shares as low as $.24. The company lost $65 million last quarter. Its revenue continues to fall rapidly as firms such as  Redbox and NetFlix siphon off its revenue. Blockbuster has more than 6,000 stores, so it is hard to imagine that the company could disappear. But, there is some precedent, even if it is on a smaller scale. Blockbuster rival Movie Gallery said in February that it would close all of its 2,400 US stores. Blockbuster’s model of renting movies through physical locations has been destroyed by cable and satellite video on demand, DVDs via mail, and dispensing machines. Blockbuster may still be around as a company that has movie kiosks and a small mail and Internet-delivered content business. But its brick and-mortar business is dead.

Dollar Thrifty Automotive Group (NYSE: DTG), the car rental company, is for sale. Hertz (NYSE: HTZ) is a potential buyer as is Avis Budget (NYSE: CAR). Each of the larger car rental firms would use the Dollar Thrifty business to expand their market share. That does not mean that they would keep the brand. The current company is not much of a business. It made only $27 million last quarter on revenue of $348 million. It has more than $1.5 billion in “debt and other obligations.” The number of vehicles that Dollar Thrifty operates at any one time is only 95,000 compared to 420,000 for Hertz. The firm’s customer base and some of its locations may be valuable, but Dollar Thrifty can’t compete with Avis and Hertz. A decade ago, the car rental industry was able to support six independent brands. A significant drop in business and leisure travel and sharp competition among the companies has already caused the creation of Avis Budget.  Dollar Thrifty will be the next casualty of the industry’s consolidation.