The top Goldman Sachs pick from the Canadian oil producers is Suncor Energy Inc. (NYSE: SU). The company is the largest producer in the oil sands region, and it produced more than 700 million barrels of oil equivalent per day in 2021. Goldman Sachs raised its earnings per share (EPS) estimates by 12.2% for 2022, 10.9% for 2023,and 1.9% in 2024. Suncor doubled its dividend payment in October and repurchased 5.5% of its outstanding common shares in 2021.

The analysts noted that Suncor’s share price has risen 153% since January of 2021 compared to a Canadian peer average of 283% in the same period:

Among our Canadian Oils coverage, we see the most upside to SU on a total return basis, with a 23% total return on our 12-month US$51 price target relative to the Canada average total return of 18%. We expect improved business turnaround will be key to closing the performance gap.

Key risks to Goldman’s estimates remain commodity prices, refining margins, and operational execution. The analysts rate the stock a Buy and raised its price target from $43.00 to $51.00. Suncor’s dividend yield is about 3.25% and its total return over the past 12 months is about 57%.

Canadian Natural Resources Ltd. (NYSE: CNQ) also trades under the same ticker symbol in Toronto. The Goldman Sachs analysts have maintained their Neutral rating on the shares and raised their price target from $72 to $80. As is the case for all these stocks, the higher price target reflects higher commodity prices and revised earnings estimates. As the following chart shows, all five of these Canadian stocks outperformed both U.S. super majors, Exxon Mobil and Chevron, as well as Diamondback Energy, a top-rated independent U.S. producer: 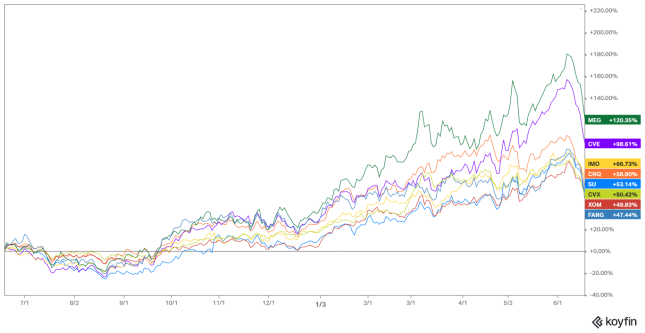 Goldman Sachs raised its earnings estimates on Canadian Natural Resources by 12.2% this year and 14.6% in 2023, before slipping by 2.2% in 2024. The price target and EPS changes reflect updated commodity price assumptions, tweaks to production costs and buyback assumptions. Key risks include lower commodity prices, higher capital spending and operational execution.