12 Countries That Hate Their Government Most 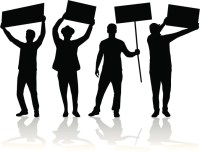 Source: thinkstock.com
Europeans went in May to the polls to vote for their representatives to the European Parliament. The results were surprising, as parties in the far right and skeptics of the European Union grew in popularity, picking up seats in the political organization. If anything, the vote was a testament to how unhappy people were with the status quo.

In many countries, lawmakers and their governments are quite unpopular. U.S. President Barack Obama’s approval rating sank to 42% in October from over 65% when he was elected into office, according to Gallup. However, Obama still looks exceptionally popular in contrast to some governments’ approval ratings. The government of Bosnia and Herzegovina, for instance, had the world’s lowest approval rating, at just 8%. Based on Gallup’s study “Global States of Mind 2014″ released at the Meridian Global Leadership Summit, these are the countries that hate their government most.

In an interview with 24/7 Wall St., Ambassador Stuart Holliday, president and CEO of the Meridian International Center, a global leadership center based in Washington D.C., said that people’s perception of their own economic future plays a major role in approval ratings. For poorly-rated countries, “the common denominator is really the gap between the human potential — the level of education and employability — and where people see the opportunity to build a life for themselves.”

A number of the countries with the lowest government approval ratings are highly-developed nations — such as Spain, Portugal, and Greece — in which the economy has languished in recent years. According to Holliday, in many of these countries, residents “have looked at the state as the ultimate backstop on their society’s performance.” People, in turn, can become disillusioned with their leadership when they realize “there’s a gap between what the government can do, and what is needed.”

For many countries in Eastern Europe, Holliday noted, perceptions of capitalism’s success may influence approval ratings. “Capitalism, or western private market economics, as [a] system that can provide for broad well-being has been no longer necessarily a given.”

Perception of corruption can also play a role in shaping residents’ approval of their government. In 10 of the 12 nations with the lowest governmental approval ratings, more than 80% of those polled believed that government corruption was widespread in 2013. Further, 89% of Spaniards surveyed felt this way, the eighth highest share of any country in the world. Residents of Greece and Bosnia and Herzegovina felt even stronger. Ninety-one percent of those polled in each of those countries said corruption was commonplace.

Based on the Gallup study “Global States of Mind 2014,” 24/7 Wall St. reviewed the 12 countries in which 20% or fewer respondents approved of their governments. In addition, we also reviewed Gallup data on perceptions of corruption, perceptions of foreign leadership, and confidence in the financial system by country. Figures for inflation, debt, and unemployment are from the International Monetary Fund (IMF) and are as of 2013 unless otherwise noted.

These are the 12 countries that hate their governments most.