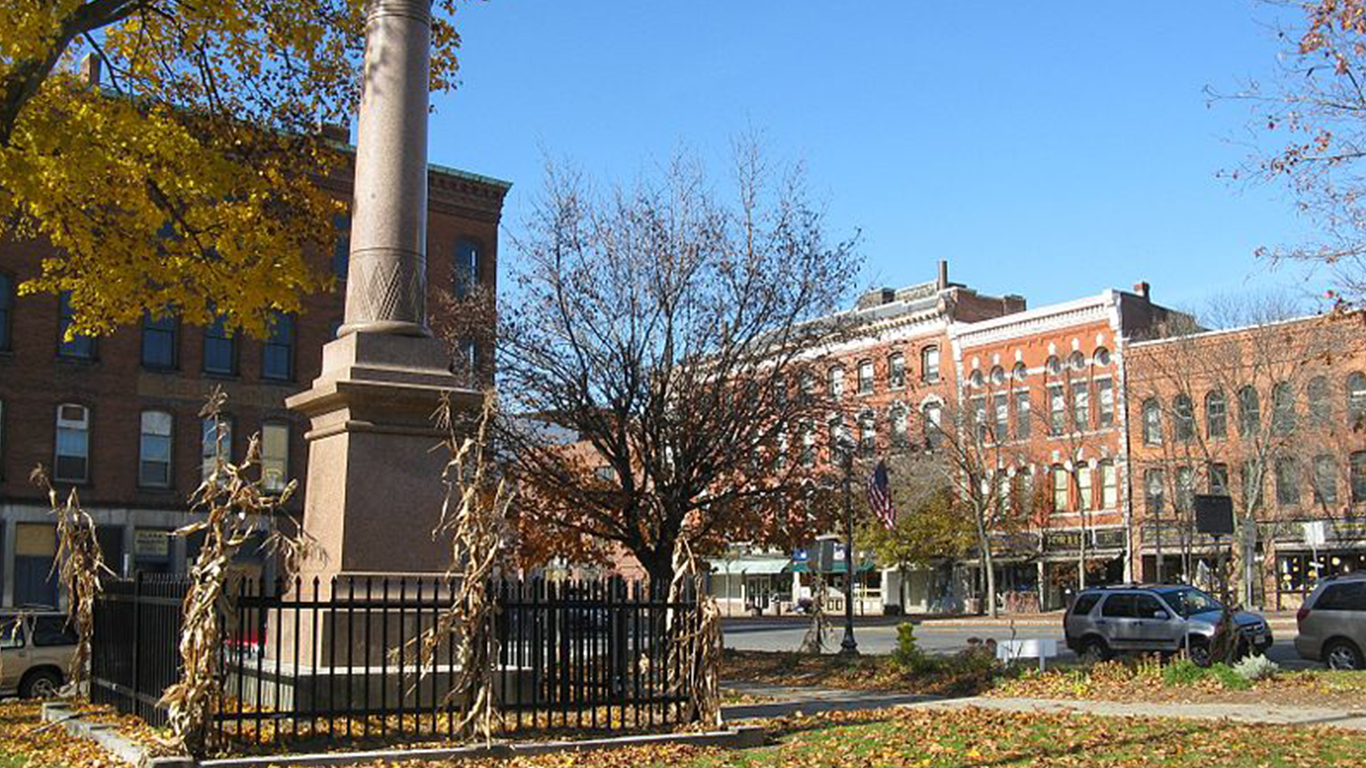 William Coleman, the first attorney in this town in Hampshire County, in northwestern Massachusetts (and the man who was later to co-found the New York Post with Alexander Hamilton; see No. 14), wanted to publish a record of current events in the area. In 1792, he brought a journeyman printer, Thomas Dickman, from Worcester to edit his journal, which was dubbed the Impartial Intelligencer.

The paper was bought in 1955 by Henry J. Conland and William Dwight Sr., and the Dwight family still owns it as part of their Newspapers of New England group, which also owns several other dailies, weeklies, and associated properties in Massachusetts and New Hampshire. In 1964, the word “Gazette” was removed from the Greenfield paper’s name, and in 1985, the publishers took “Greenfield” out, too, to reflect its coverage of an area beyond just that city. 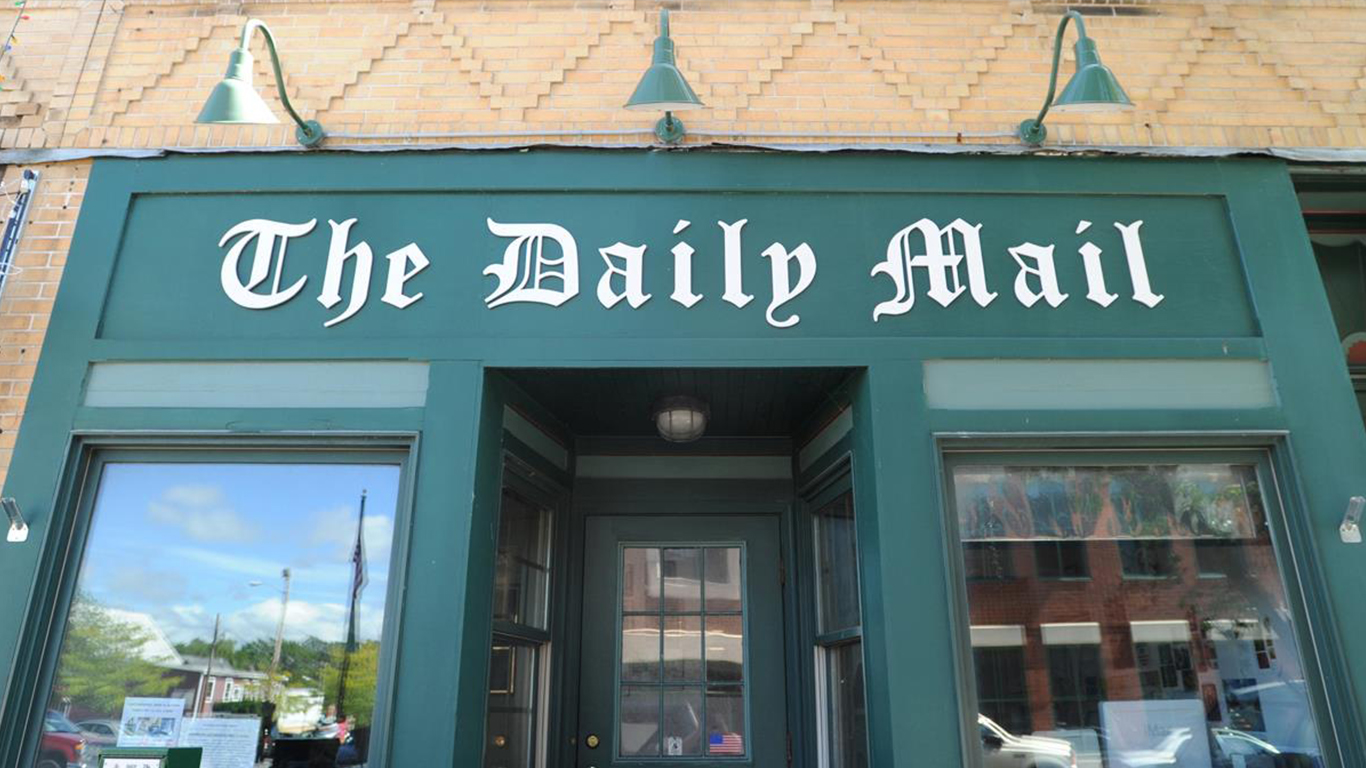 Source: Courtesy of The Daily Mail

The Daily Mail’s earliest direct ancestor is the Catskill Packet, which first appeared in 1792, under the direction of brothers Thomas and Mackay Croswell (Mackay had earlier apprenticed at the Connecticut Courant; see No. 1). It subsequently became the Catskill Packet, & Western Mail, then the Catskill Packet again, before suspending publication temporarily in 1797 and folding in 1799.

Another Croswell brother, Harry, joined Mackay to edit a continuation of the Packet called the Catskill Western Constellation from 1800 to 1801. This evolved into the Catskill Recorder in 1804, which went on to absorb several other local newspapers — the Greene County Republican, the Catskill Democrat, and the American Eagle. By 1871, it had become simply the Recorder.

A former postmaster, John D. Smith, founded the Catskill Morning Mail, later the Daily Mail, in 1879. The Recorder, meanwhile, merged with the 1830-vintage Catskill Examiner in 1938, becoming the Examiner-Recorder. This became the Greene County News in 1962, and this in turn was taken over by the Daily Mail in 2003. Today, it belongs to the Hudson, New York-based Columbia Greene Media Corp., an advertising agency and digital and print publisher with several other properties in the Catskills area. 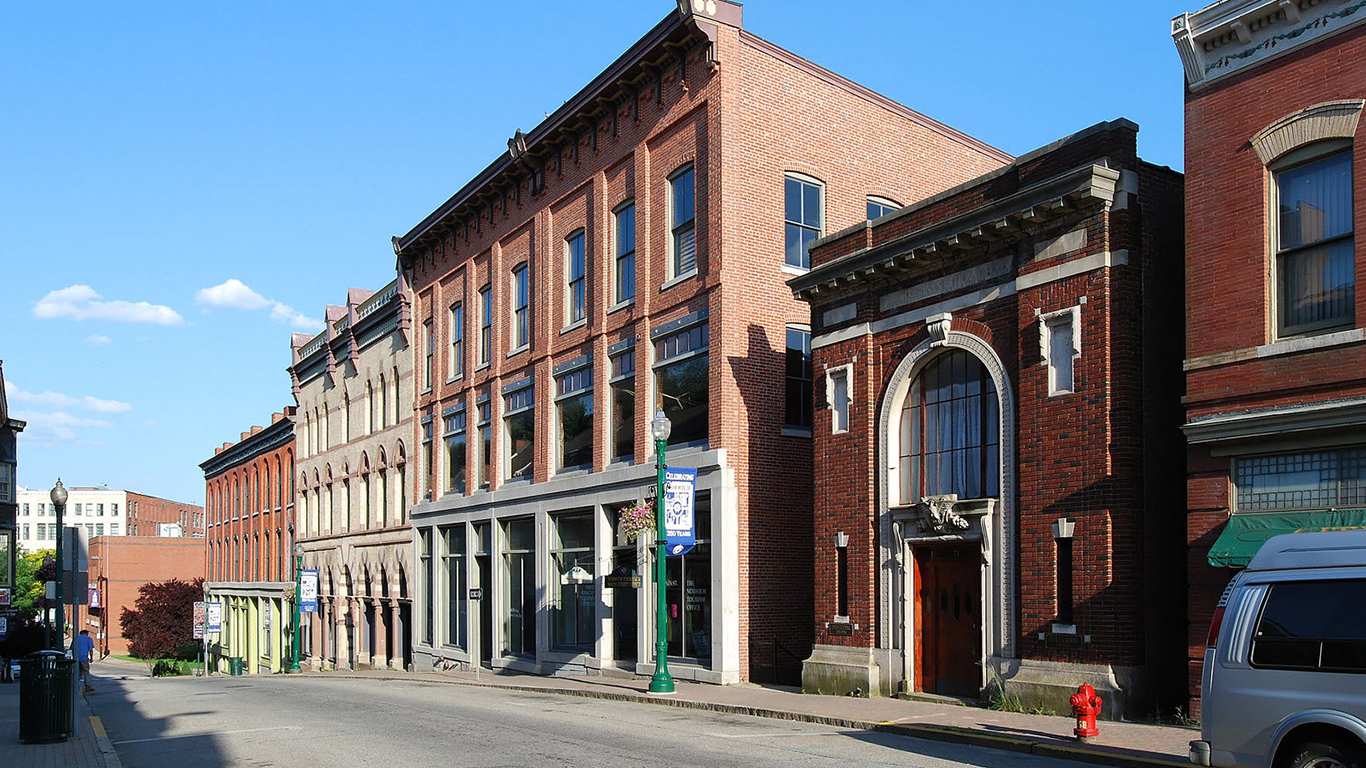 In late 1791, Ebenezer Bushnell — a native of Lebanon, Connecticut, described in a 1903 volume called “Biographical Sketches of the Graduates of Yale College” as “a man of mechanical genius, quick wit, and varied information” — founded The Weekly Register in Norwich, in Connecticut’s New London County. About six months later, Bushnell’s brother-in-law, Thomas Hubbard, joined him in “a partnership in the Printing and Stocking-weaving business” (according to “American Biography” by Charles Evans, published in 1914). The following year, Bushnell left the paper, and Hubbard continued publishing it until 1796, when he moved to the Chelsea Landing area of Norwich and converted the Register to the Chelsea Courier.

The Courier continued, under various names and ownerships, until 1860. Two years earlier, the company that then owned the Courier, which appeared in the afternoon, decided that a morning paper would be more successful and launched the Norwich Morning Bulletin. In 1863, a group of local businessmen, probably led by banker Lorenzo Blackstone and cotton manufacturer John F. Slater, formed a stock company to take over the publication. In 1895, the owners renamed it simply the Norwich Bulletin.

The paper appeared under that name until 2011 under various owners — including Gannett Co., which bought it in 1981 and GateHouse Media (its current owners), which purchased it from Gannett in 2007. In 2011, GateHouse renamed it the Bulletin. 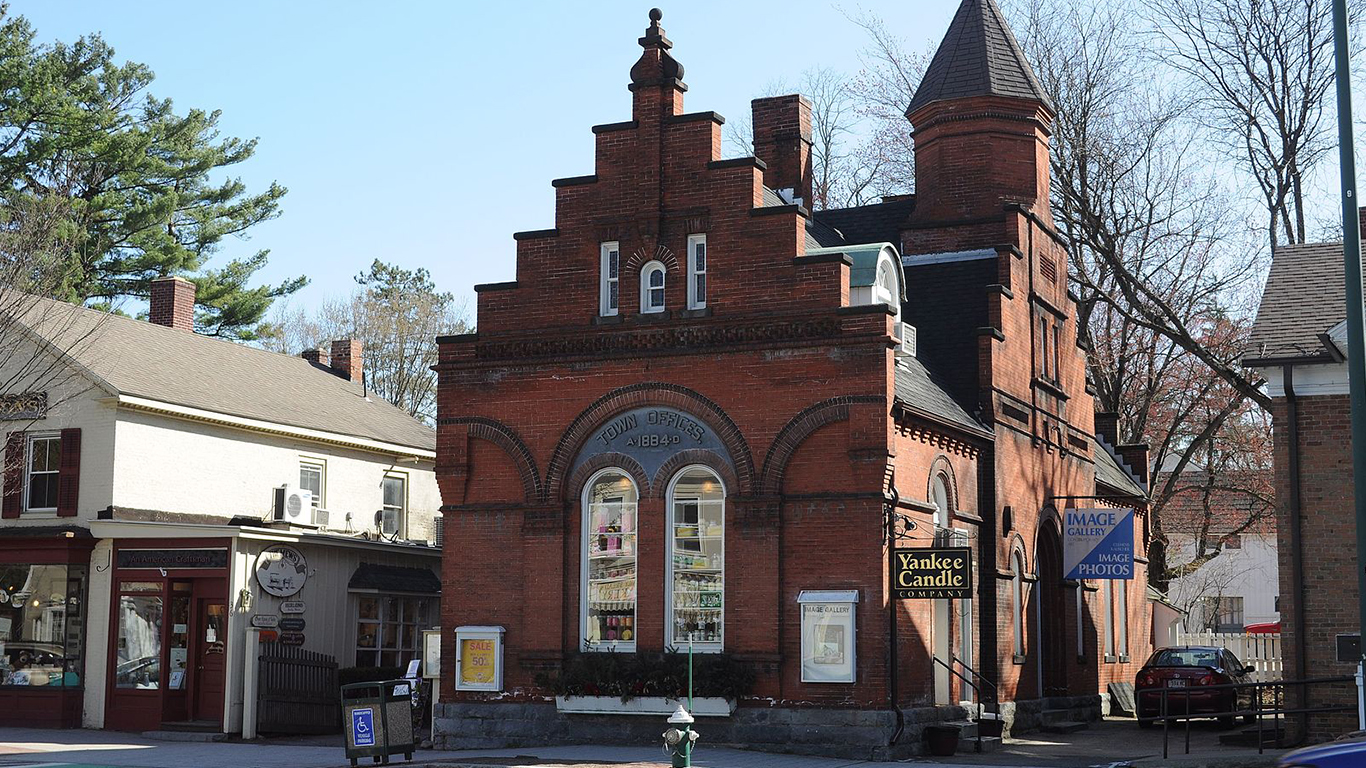 Printer Loring Andrews began publishing the Western Star (not the Stockbridge Star, as some sources report) in the town of Stockbridge, in the Berkshires of Massachusetts, in 1789. This became Andrews’s Western Star, and then the Berkshire Star. In 1828, the owners of the paper moved it to nearby Lenox and renamed it the Star and County Republican. The following year, a new owner renamed it the Berkshire Journal, and two years after that consolidated it with the Argus, published in another Berkshire town, Pittsfield.

The paper appeared as the Journal and Argus until 1834, when it was renamed the Massachusetts Eagle. This became the Berkshire County Eagle and then, in 1892, after Kelton B. Miller — later to become the mayor of Pittsfield — bought it, simply the Eagle. Miller’s descendents continued to run the Eagle until 1995, when the family sold it, along with several papers they owned in Vermont, to Denver-based MediaNews Group, Inc., now Digital First Media, which retains proprietorship. 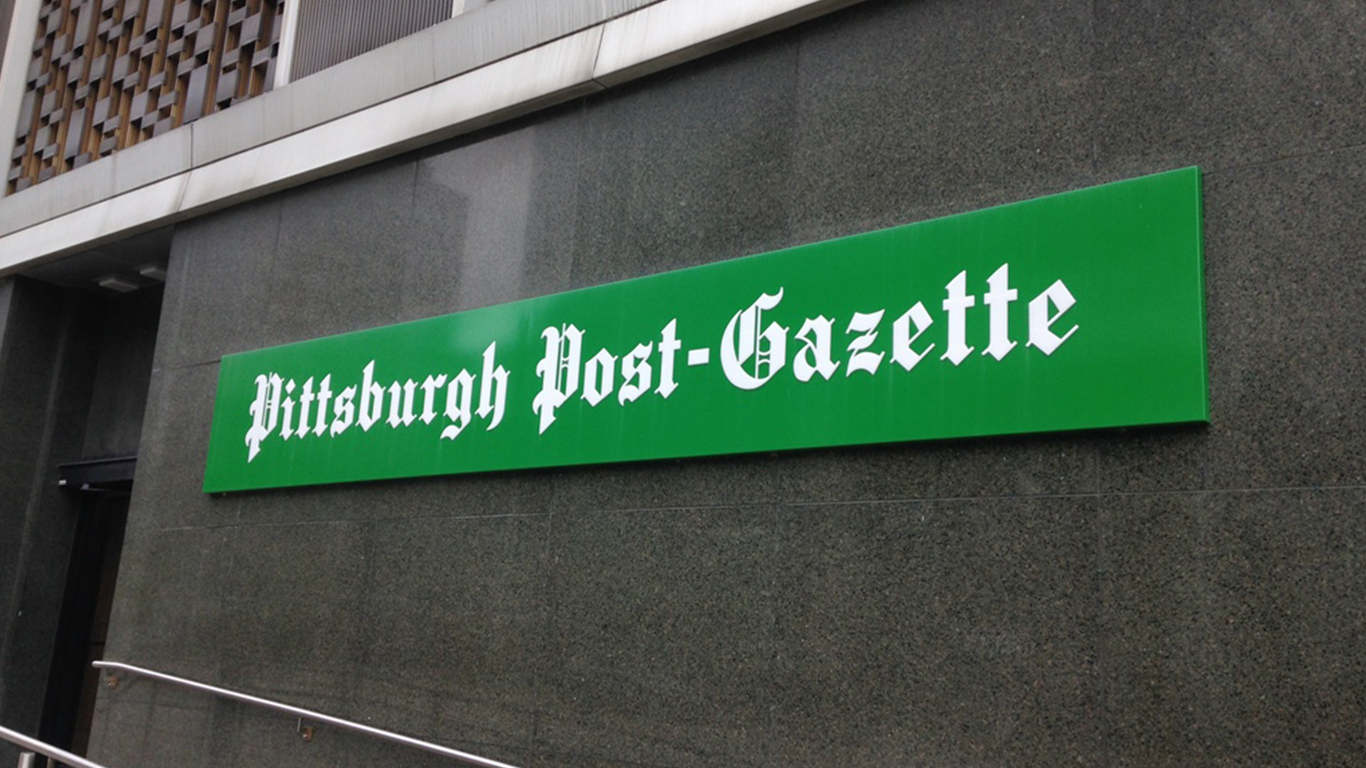 In 1786, a Pennsylvania state assemblyman, writer, and lawyer named Hugh Henry Brackenridge brought two 21-year-old Philadelphia printers, John Scull and Joseph Hall, and a wooden printing press to Pittsburgh to start the Pittsburgh Gazette, a weekly that was the first newspaper published west of the Alleghenies.

Hall died a few months after the first issue of the Gazette appeared, but Scull continued to publish it, at first under the close supervision of Brackenridge and then in political opposition to him, until 1816. Several other owners took it over in succession, and in 1820 it was renamed Pittsburgh Gazette, and Manufacturing and Mercantile Advertiser. In 1833, again under the name Pittsburgh Gazette, it was taken over by author, editor, and composter Neville B. Craig, who ran it until 1841, transforming it along the way into Pittsburgh’s first daily.

Craig’s successor, David N. White, was a leading abolitionist, who turned the Gazette into an important anti-slavery publication. A subsequent owner, Nelson P. Reed, who took it over in 1866, combined it with another paper, the Pittsburgh Daily Commercial, which had been founded in 1863, to form the Commercial Gazette.

The paper became just the Gazette again in 1900, later merging with the Pittsburgh Times, to become the Gazette-Times. It passed into the hands of the legendary William Randolph Hearst in 1927. The same year, a German immigrant and experienced newspaperman named Paul Block, Sr., who owned two other local papers, the Post and the Sun, arranged to swap the Sun for Hearst’s Gazette-Times, and Block created the Post-Gazette.

The Block family has owned the Post-Gazette ever since, now through the Toledo, Ohio-based Block Communications, Inc., which also owns the Toledo Blade and other newspapers and broadcast properties. As of earlier this year, the Post-Gazette cut its publishing schedule to five days a week, giving Pittsburgh the dubious honor of being the largest American city without a daily printed paper.