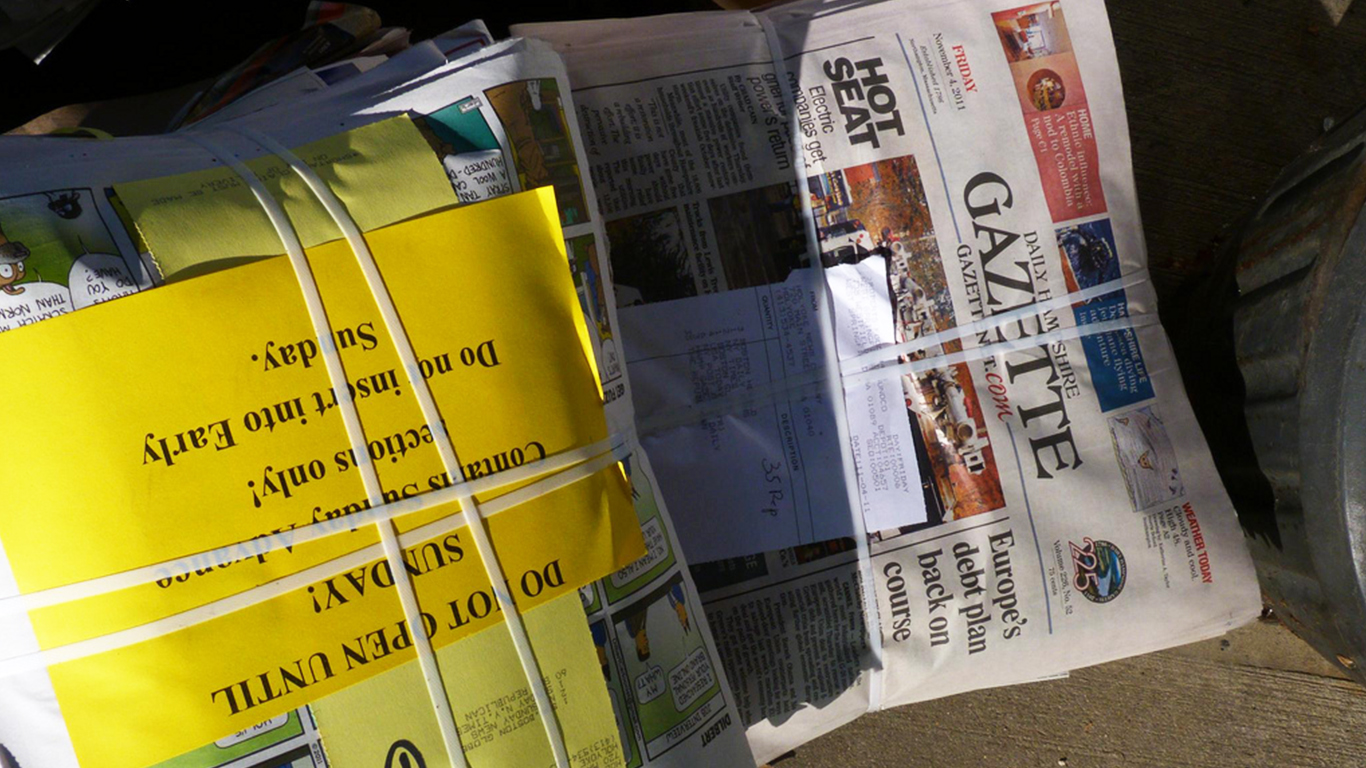 Founded in Northampton, north of Springfield, in 1786 by 22-year-old William Butler, who had been a printer’s apprentice in Hartford, Connecticut, the Hampshire Gazette may have come into existence as a result of Shays’ Rebellion — a conflict between state government officials and a large group of farmers facing foreclosure for delinquent taxes and non-payment of other debts. Historians believe that Butler was encouraged to start his paper as an organ of government efforts to quell the uprising, and a week after the Gazette’s first issue, it published a proclamation by Massachusetts Gov. James Bowdoin calling for state officials to suppress “all such treasonable proceedings.”

Butler published the Gazette until 1815. For the next century, the paper operated under numerous owners and partnerships. It became the Hampshire Gazette and Northampton Courier in 1858 and continued as a weekly under that name until 1917. Meanwhile, an offshoot, the Daily Hampshire Gazette, appeared in 1890. In 1917, the daily and weekly editions merged.

The paper’s business manager, Harriet Williams DeRose, bought it in 1929, becoming one of the nation’s first female newspaper publishers. Her son and then her grandsons continued to run the paper until 2005, until it was bought by Newspapers of New England, which also owns two other Massachusetts publications, including the Recorder in Greenville (see No. 10). 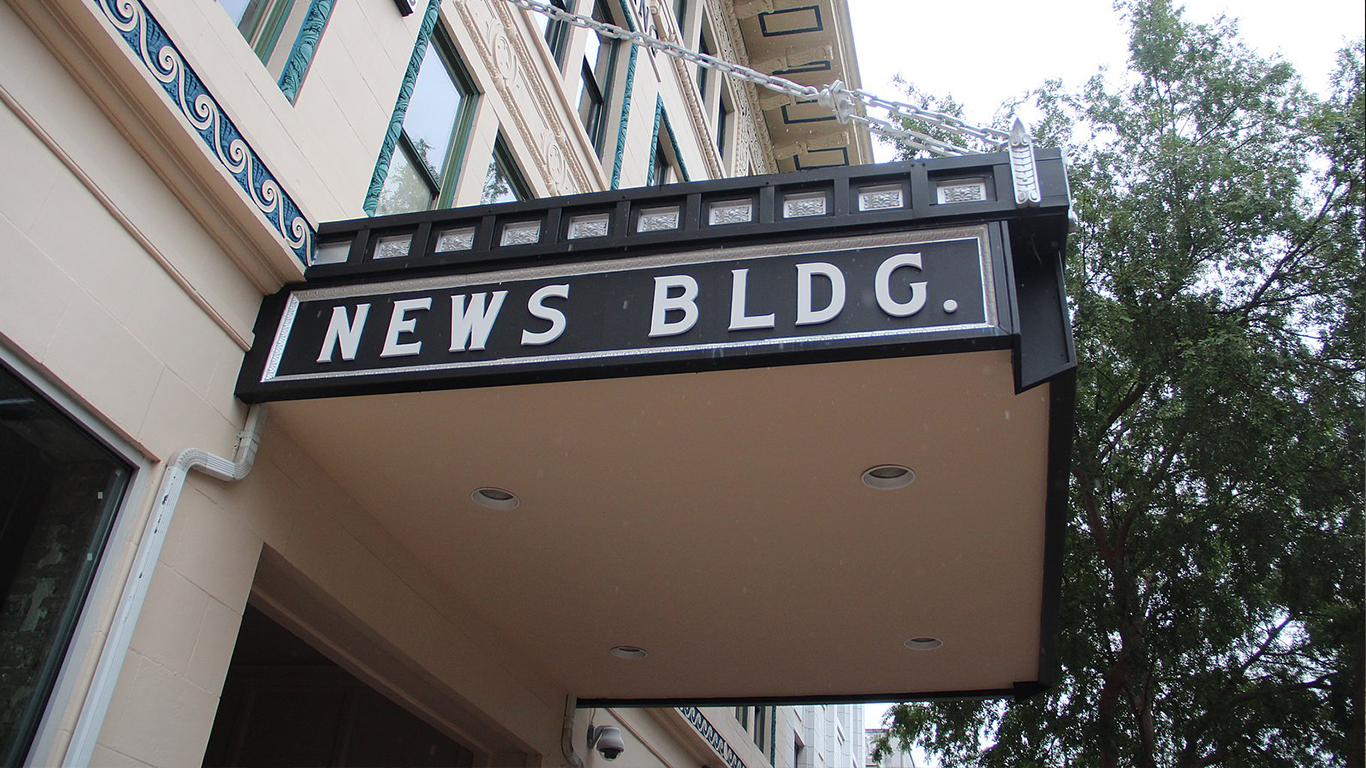 Printer Greenberg Hughes founded the Augusta Gazette in the Georgia town of Augusta, southeast of Atlanta, in 1785. He decamped the following year, and the paper was taken over by a German immigrant named John Erdman Smith, who renamed it the Augusta Chronicle and Gazette of the State. He remained in charge until 1803, and several other owners and editors took over before 1825, when it came into the hands of A.H. Pemberton, who shortened its name to Augusta Chronicle, and used his editorship to advocate secession and oppose the abolition of slavery.

Pemberton sold the paper in 1835, and the next year it merged with a competitor, the States Rights Sentinel, which had been started by prominent Augusta lawyer, politician, and minister, Augustus Baldwin Longstreet. The Augusta Chronicle and Sentinel, which first appeared in January of 1837, was the city’s first daily.

Under brothers William S. and James W. Jones, who bought the paper in 1840, it remained an advocate of slavery, but a later editor, Nathan Morse of Connecticut, installed after the start of the Civil War, became a critic of Confederate President Jefferson Davis. After the war, Morse sold the paper, and it had a number of editors and publishers through 1929, when it was sold to the International Paper and Power Company. The paper company’s president, William S. Morris, Jr., bought the Chronicle from International Paper in 1945. He later bought another local paper, the rival Augusta Herald, as well as the local radio and TV stations.

Morris’s son, Billy Morris, established Morris Communications Corporation, which acquired other media properties. The company sold the Chronicle to GateHouse Media in 2017 and today the company specializes in city magazines and the “Where” travel guides, among other businesses. 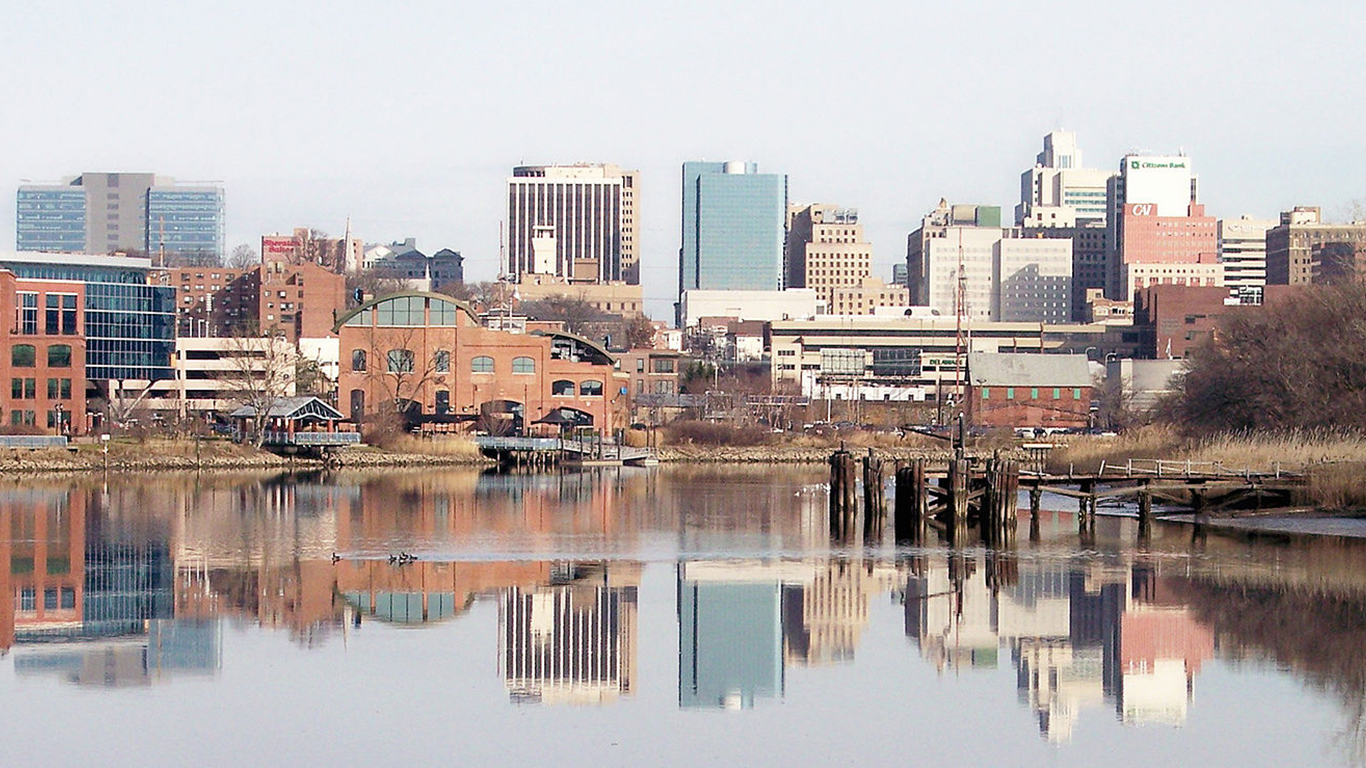 Despite rumors of an earlier, short-lived Delaware newspaper, the state’s first authenticated paper was the Delaware Gazette, started in Wilmington in 1785 by one Jacob Killen. Killen sold it two years later, and it went through a number of owners in the ensuing decades. In 1828, it took over two other Delaware papers, the Patriot and the American Watchman, and became the Delaware Gazette and American Watchman.

In 1858, Caleb P. Johnson, who had worked as a printer in Philadelphia, New York, and Washington, D.C., became editor and publisher of the paper, by then just the Delaware Gazette, holding the position for almost 30 years. In addition to the Gazette, a weekly, Johnson began publishing the Wilmington Daily Gazette, which in 1878 merged with a paper called Every Evening and Commercial (itself formed from two other publications), to become Every Evening, Wilmington Daily Commercial. The weekly Gazette, meanwhile, merged with Every Evening’s weekly version to become the Delaware Gazette and State Journal.

A new daily, the Morning Herald, was founded in 1876 by Philadelphia attorney John O’Byrne. This later became the Daily Morning News. A new afternoon paper, the Evening Journal, appeared in 1888, merging with the daily Every Evening in 1933. Alfred I. du Pont, the famed Delaware industrialist and businessman, owned the Morning News between 1911 and 1920, which he merged it with the Evening Journal to form the News-Journal. The News-Journal Co., under the umbrella of a du Pont holding company, retained ownership until 1978, when it was sold to Gannett Co., its current proprietors. 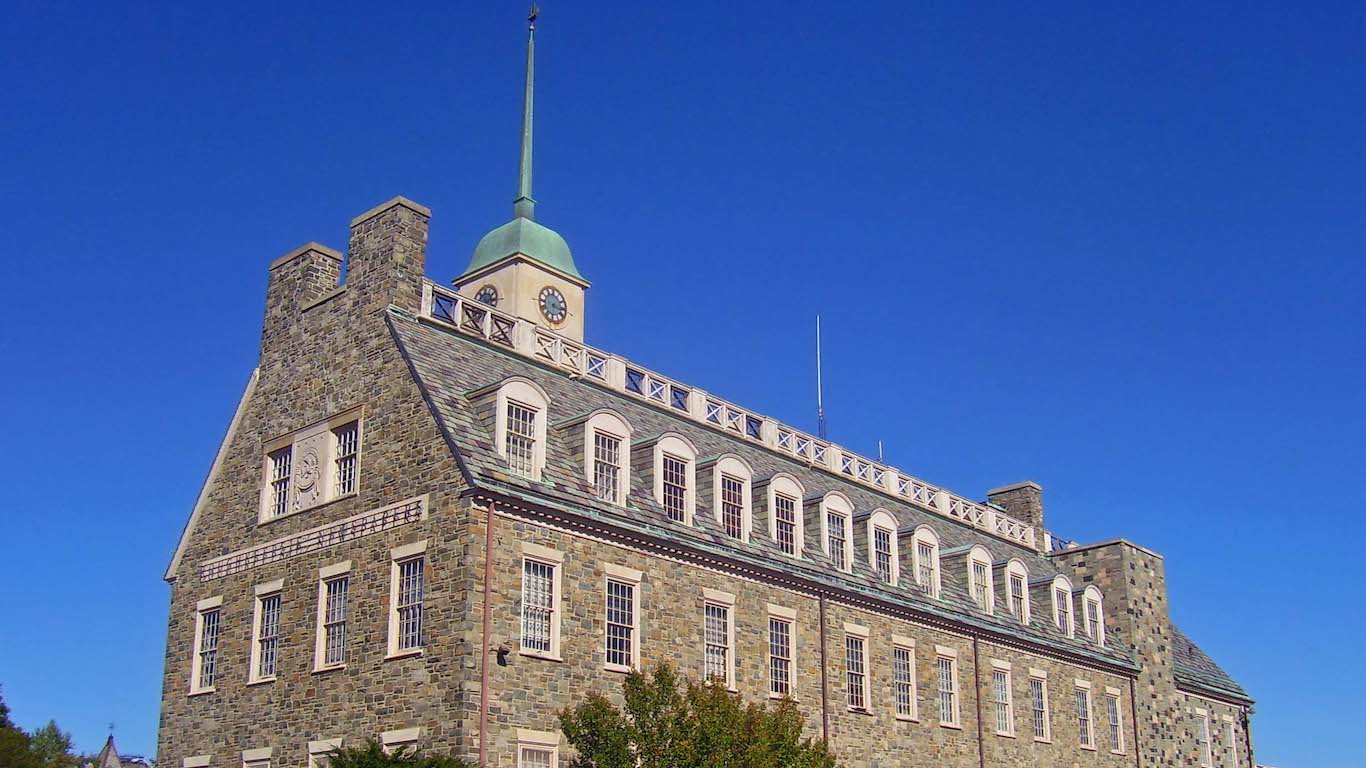 In the summer of 1785, Nicholas Power, a dry goods merchant in the Hudson River Valley town of Poughkeepsie, started a weekly newspaper called the Country Journal and Poughkeepsie Advertiser. Along with publishing legal notices and accounts of local goings-on, he covered the 1788 New York convention — in Poughkeepsie, then the state capital — at which the state ratified the new U.S. Constitution, and printed a letter to the editor by none other than George Washington. 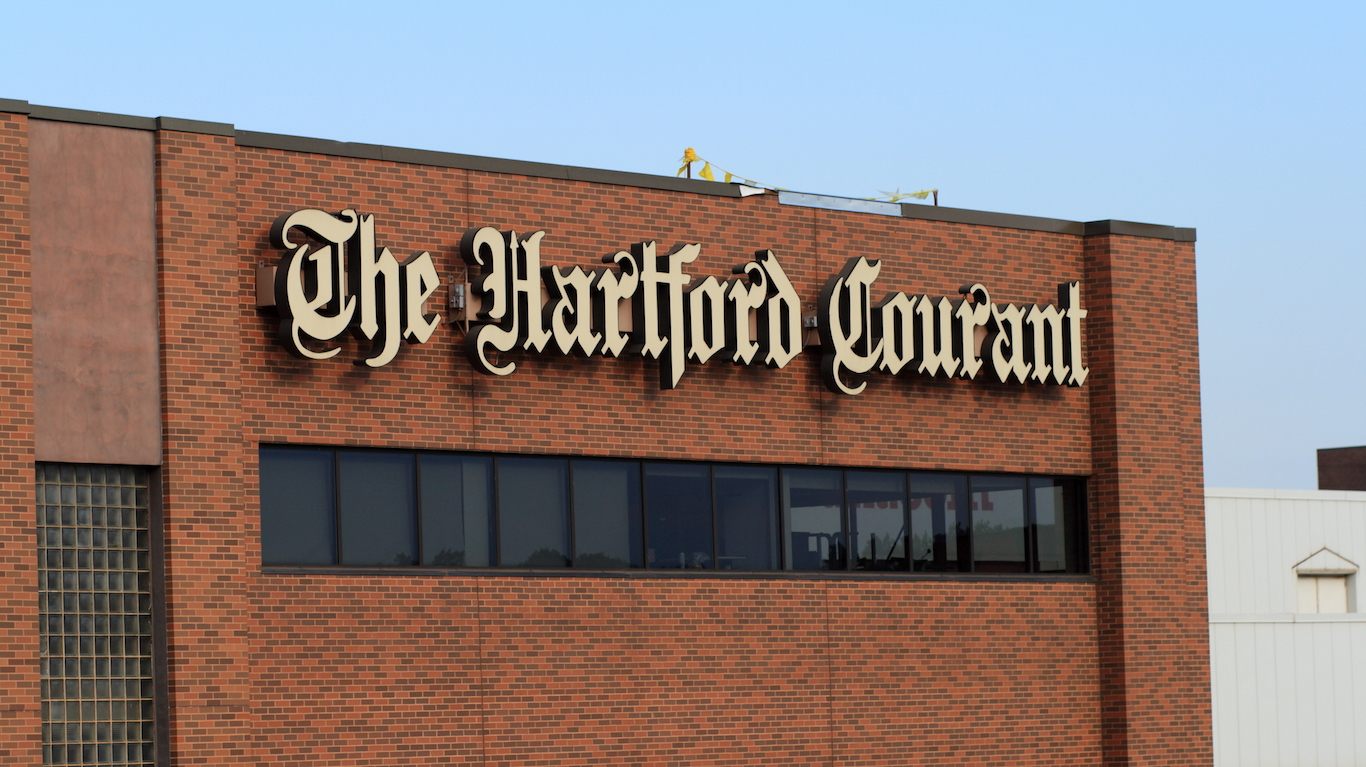 The oldest newspaper in America got its start because fourth-generation printer Thomas Green got fired by Benjamin Franklin. He had been publishing Connecticut’s first newspaper, the Connecticut Gazette, at a New Haven print shop set up by Franklin. But Franklin wanted to give the enterprise over to his nephew, so he let go of Green and his apprentice, Ebenezer Watson.

Green and Wilson moved to Hartford and rented a space above Mookler’s barbershop. Some sources say that he began printing the paper he dubbed the Connecticut Courant out of a tavern called the Heart and Crown. In fact, that was the name of his print shop, and he fashioned a tavern-style sign to advertise it.

In 1765, Green and Watson hired a young neighborhood boy, George Goodwin, as a “printer’s devil” (apprentice). In 1768, Green moved back to New Haven, where he started a paper of his own, giving the Courant over to Watson. The weekly Courant became a leading proponent of independence from British rule, criticizing the Stamp Act (which imposed taxes on newspapers and official documents), reporting on the Boston Tea Party, and, on July 15, 1776, publishing the Declaration of Independence as breaking news.

Watson died of smallpox in 1777, leaving the paper to his widow, Hannah, a pioneering American female newspaper publisher. She brought in George Goodwin, a week before his 21st birthday, as her partner, and the two ran the paper for the next 36 years. The paper became a daily and was renamed the Hartford Courant in 1837, the year it was sold to a former apprentice at the Courant, John Boswell.

The publication remained under local ownership, though the particulars varied, until 1979, when the Los Angeles-based Times-Mirror Co. bought it. In 2000, the Chicago-based Tribune Co. bought Times-Mirror, including the Courant. The paper is now owned by Tronc, as the Tribune Co. was rechristened in 2016. (The much ridiculed name will soon be changed back to Tribune Publishing.)