The World's Biggest Arms Dealers and Their Biggest Clients 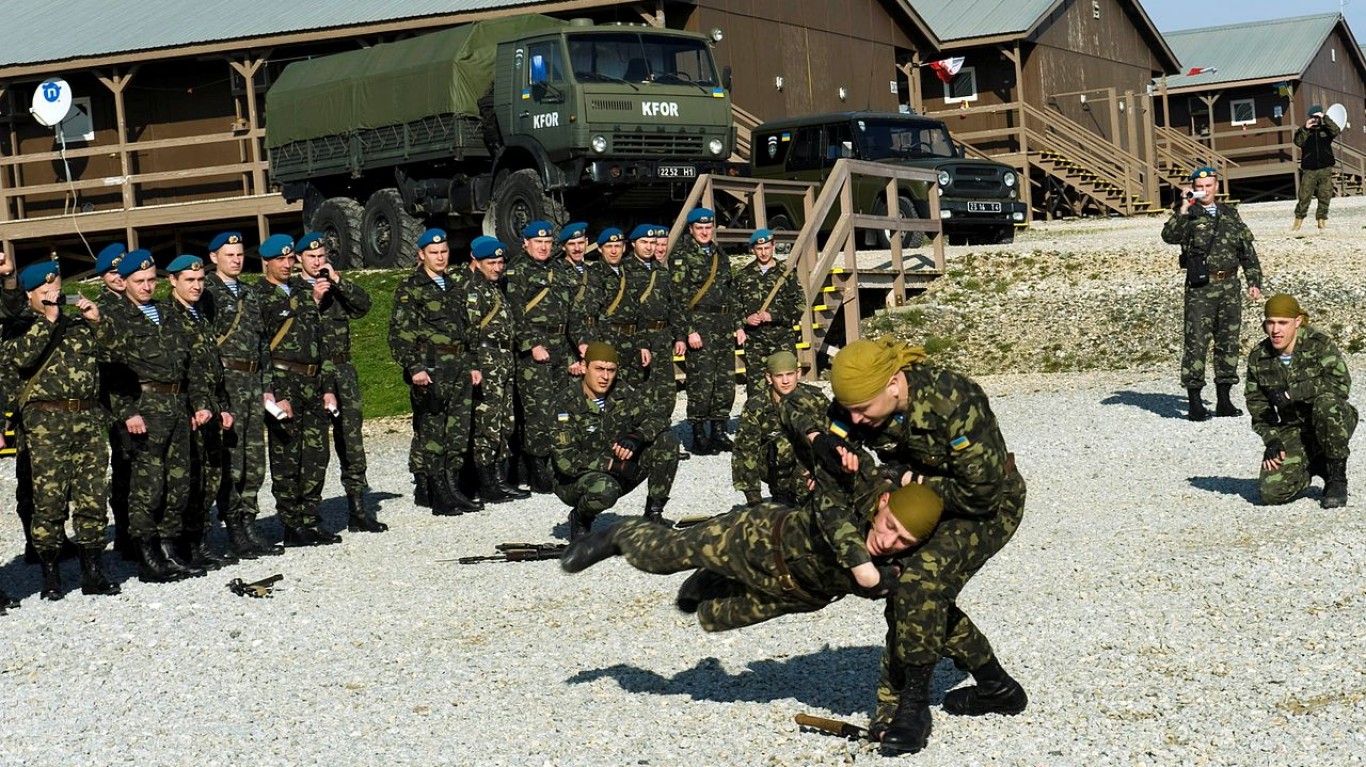 Ukrainian arms exports comprised 1.3% of total global arms exports in 2014-18, down 47% from 2.7% of global arms exports in the five-year period ending 2013. Ukraine’s exports to sub-Saharan Africa fell 79% compared to 2009-13, when Ukraine was the region’s top supplier of military equipment. The country is one of only three on this list of 12 top arms dealers to report a decline in export volume.

China is Ukraine’s biggest client, receiving 27.0% of Ukrainian arms deliveries. Russia and Thailand follow, accounting for 23.0% and 14.0% of Ukraine’s major arms exports respectively. It is notable that Russia is Ukraine’s second biggest arms client and its largest trade partner, despite conflict between the two over Russia’s annexation of Crimea in 2014. 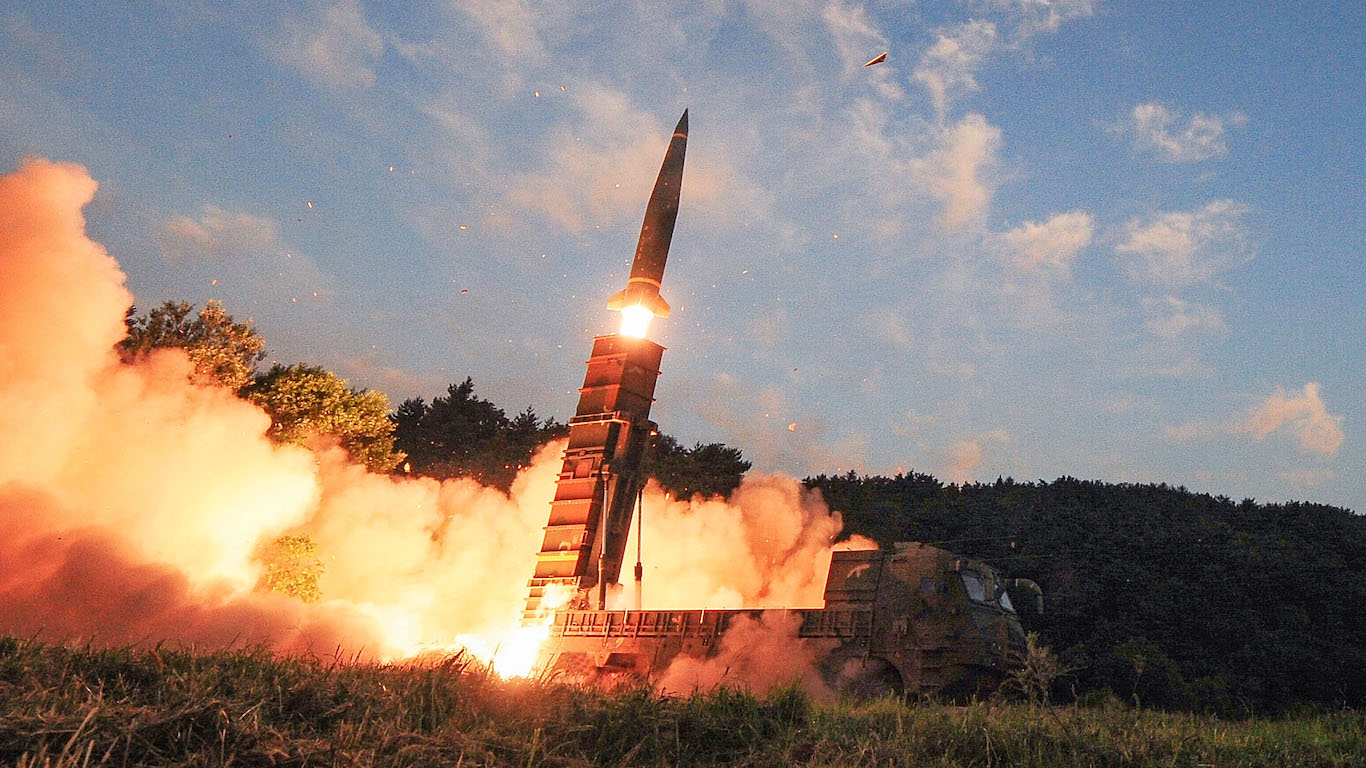 By contrast, imports to the republic shrank over the two periods, from 3.6% of global arms imports to 3.1% — enough for South Korea to remain among the 40 largest importers of military supplies. While U.S. arms exports rose overall, the world military leader’s deliveries to South Korea decreased by the largest amount out of all its clients except for Pakistan. 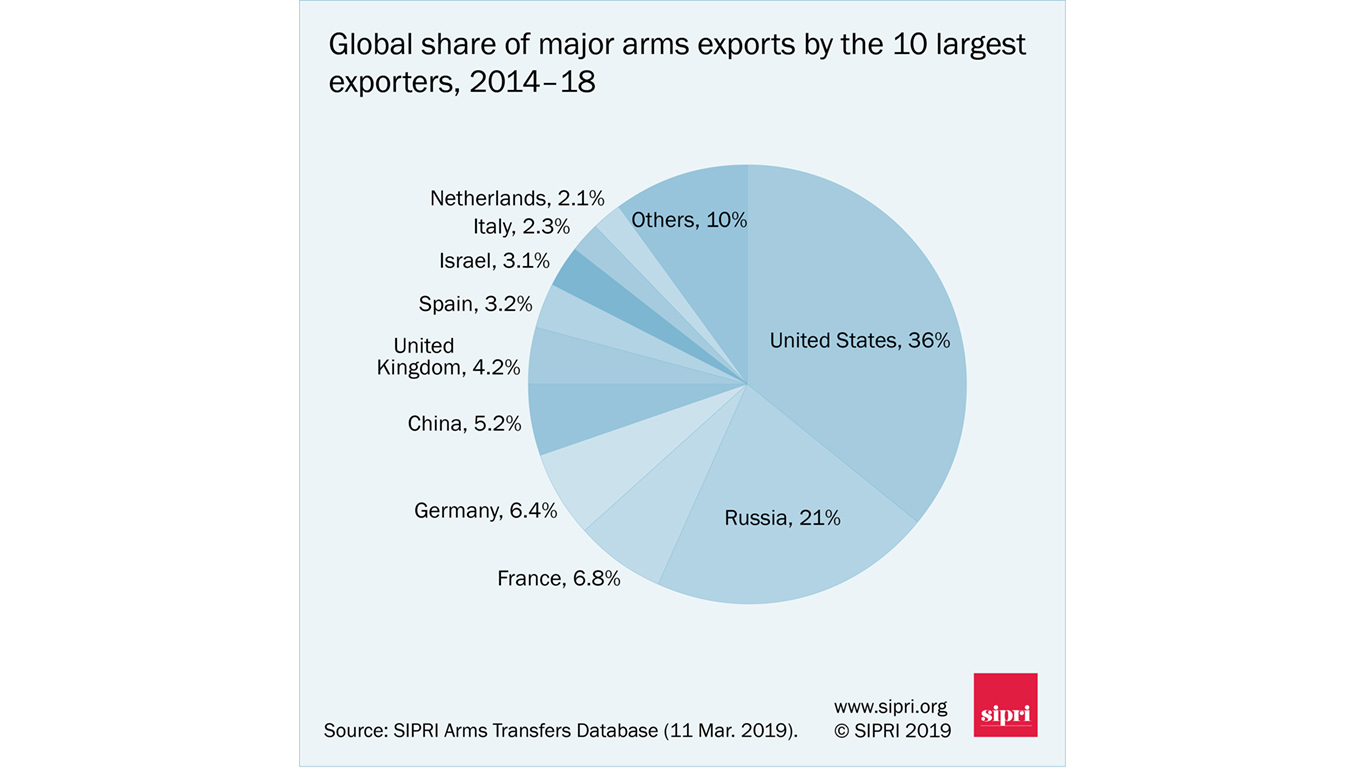 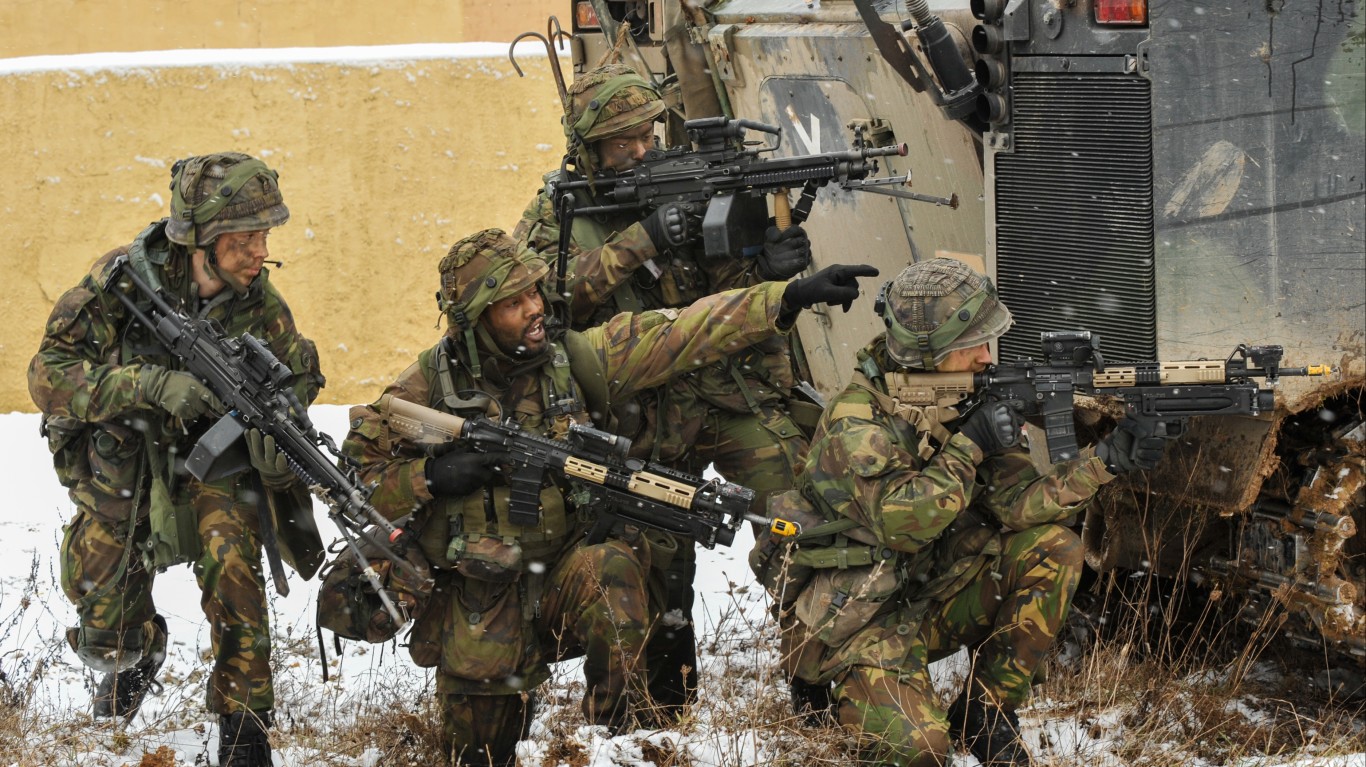 Like many of the world’s top arms exporters, the Netherlands is relatively affluent. With a GDP per capita of $48,473, the nation is easily among the 25 richest countries in the world.

Like most of the world’s top arms dealers, Dutch military exports rose between 2009-13 and 2014-18 by 16%. Jordan, Indonesia, and the United States were the country’s biggest clients, claiming 15.0%, 15.0%, and 11.0%, respectively, of Dutch arms exports. The Netherlands is also a major supplier of arms to Central America and the Caribbean, accounting for 16% of arms sent to the region. That share is a distant second to Mexico’s exports to the area, which rose dramatically to 72% due to Mexico’s involvement in operations against drug cartels. 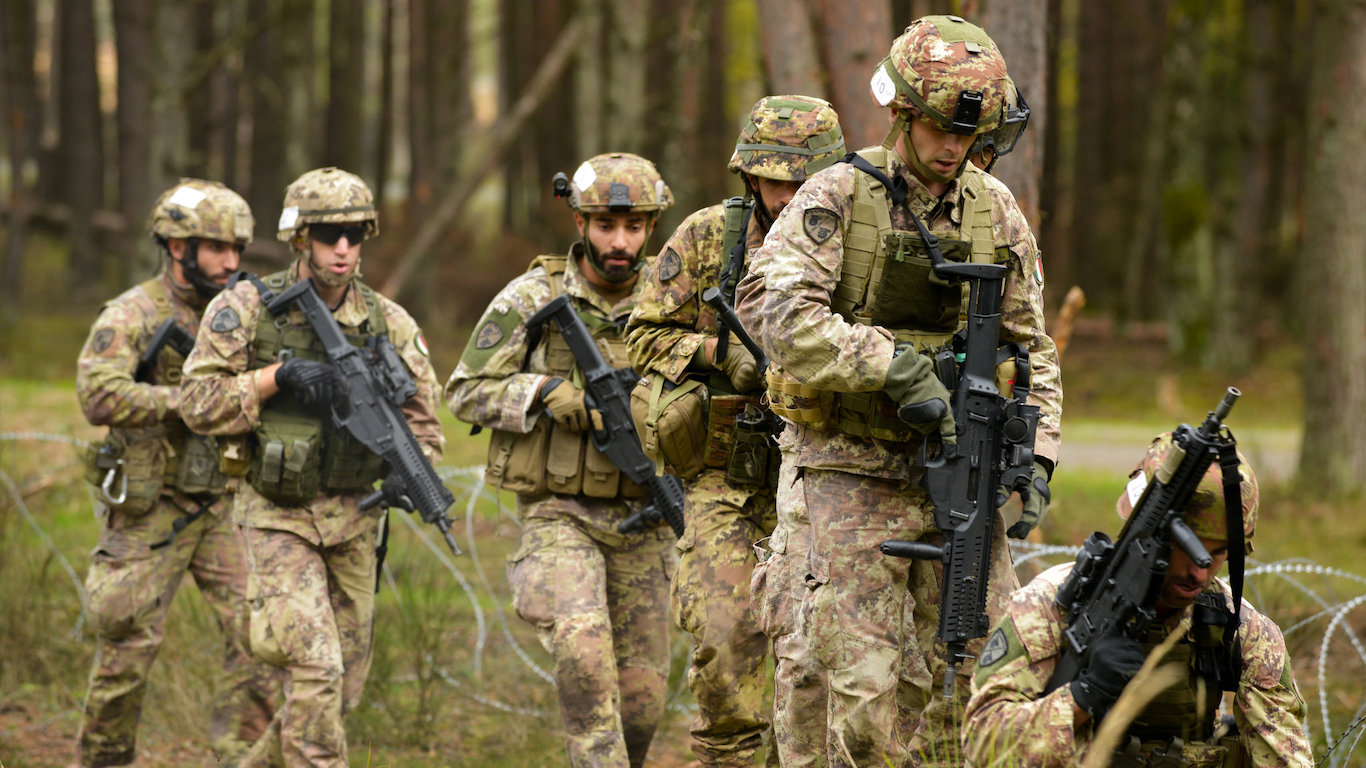 Exports by most major arms producers increased over the most recent five year period, but Italy’s total arms exports dropped by 7% between 2009-13 and 2014-18. Its share of total global arms exports fell from 2.7% to 2.3% between those periods. However, similar to many other countries in Europe, imports of arms to Italy are up substantially. Between the two periods, military supplies flowing to Italy rose by 162%, bringing the country’s share of global arms imports to 1.5% — the 20th largest share.

Italy is home to international defense contractor Leonardo, which with $8.9 billion in arms sales in 2017 ranks as the ninth largest arms manufacturer in the world. Here are the 20 international companies profiting the most from war. 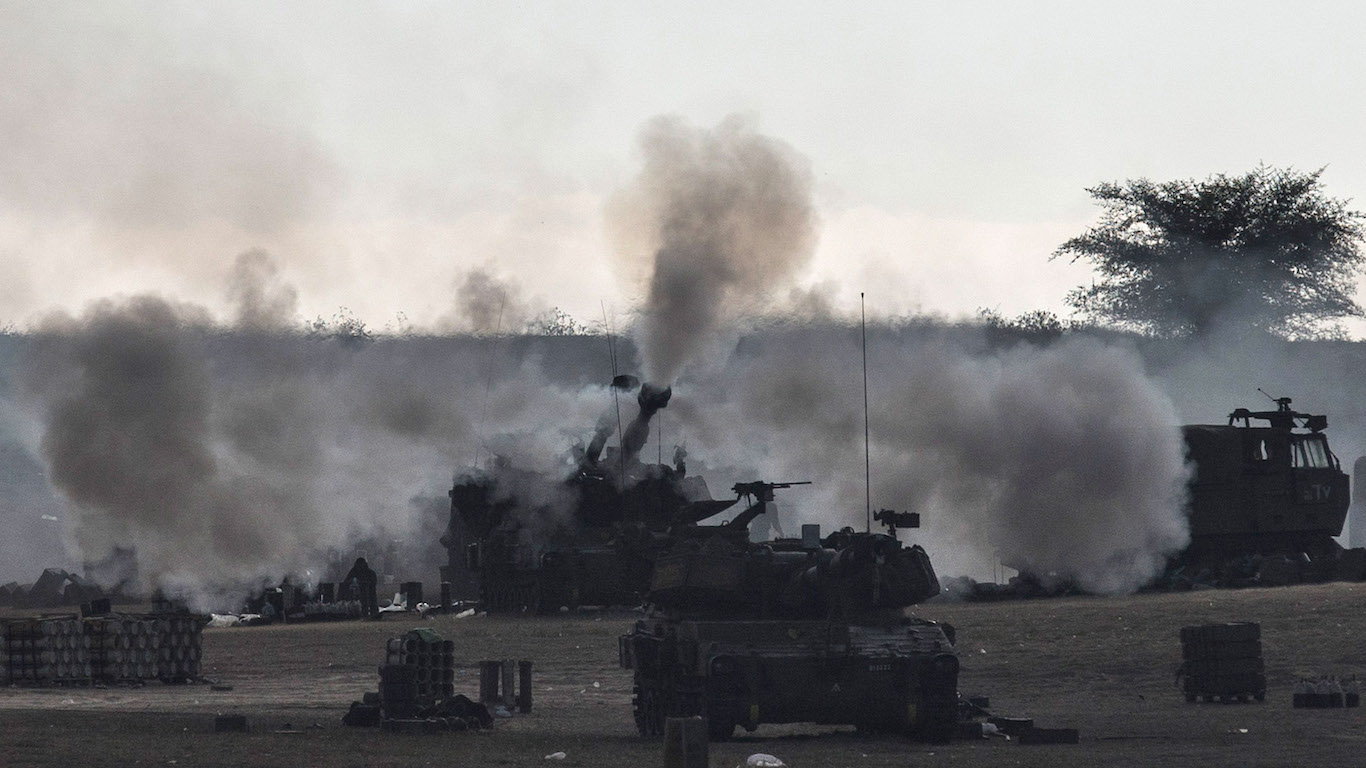 During the 2014-18 period, Israel exported 3.1% of the world’s major military supplies. India — Israel’s top client — received nearly half of all deliveries. Israel’s next biggest clients after India are Azerbaijan, with 17.0% of Israeli exports, and Vietnam, with 8.5%.

Israel’s arms exports rose 60% from 2009-13, and as is the case in just six other countries on this list, imports also rose considerably. Military supplies flowing into Israel rose $354% between 2009-13 and 2014-18 — the largest such increase of any country reviewed by SIPRI. The rise in both exports and imports in Israel reflects Israel’s rising military expenditure, which increased from $14.8 billion in 2016 to $15.5 billion in 2017.