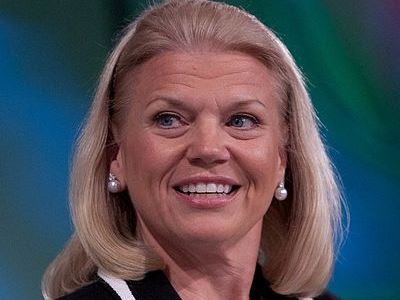 Source: Wikimedia Commons (Asa Mathat / Fortune Live Media)
International Business Machines Corp. (NYSE: IBM) board Presiding Director Michael Eskew and his fellow directors have a difficult decision ahead of them. Should they keep CEO Ginni Rometty for another year, or replace her as the tech giant continues to stumble? The board only has a brief time to act, since IBM’s spiral down, quarter by quarter, shows no sign of ending.

IBM management released another set of bad news for investors. It issued 2015 guidance of earnings between $15.75 and $16.50 a share. The forecast was short of analysts’ expectations. And revenue in 2014 fell from 2013, although some of that had to do with restructuring.

Rometty and her management team have to sell Wall Street, and IBM’s own directors, on its future progress in cloud computing, which has become the yardstick on which so many other tech companies are measured. IBM appears to have come to market late, and it will continue to be late, in the cloud sector. A great deal of industry research shows that IBM trails Amazon.com Inc. (NASDAQ: AMZN), Oracle Corp. (NASDAQ: ORCL) and Microsoft Corp. (NASDAQ: MSFT), depending on which part of the cloud market is being evaluated. IBM is not the leader in any of them, and in most cases is not even close.

The success of IBM’s cloud initiatives also supposes that its competitors stand still. That is not going to happen, because the expanding market is so essential to success across the entire industry. Additionally, an improvement for IBM is dependent on it taking enterprise and government customers from its larger rivals.

It is impossible to find an analysis of any industry that believes being late to market is an advantage. This is particularly true when the company that is late has no major features its competition does not. IBM cannot turn around its cloud initiatives. There are too many hurdles. Maybe the IBM board will take this into account as it evaluates Rometty. Why not replace a CEO who has already lost a key battle and created a loss from which the company cannot recover?