What's Up With Apple: Pre-Preview of Q2 Earnings, Spring Loaded and More

Yet, inquiring minds want to know, how did Apple perform last quarter? Did it sell bushels of iPhones? Did it pile up even more cash?

Apple CEO Tim Cook is planning to testify in the lawsuit brought against Apple by Epic Games over the 30% commission Apple charges to include an app on its App Store. Other Apple bigwigs, including Senior Vice President Craig Federighi and former marketing chief Phil Schiller are also on the witness list. The trial is scheduled to begin next month in El Paso.

Wednesday’s announcement of the April 20 Spring Loaded event will fill podcasts and news stories both during the run-up to the event and then for a week or so after. Redesigned iMacs, new iPads, AirTags, maybe an announcement about a partner to build an Apple Car, the list of possible announcements and products is seemingly endless.

Here’s one that may or may not mean anything, except that some Apple watchers have too much time on their hands. If someone were to rotate and resize Apple’s graphic for Spring Loaded, it ends up looking a lot like the familiar welcome screen Apple designed for the very first Mac. This is what Macworld thinks it looks like: 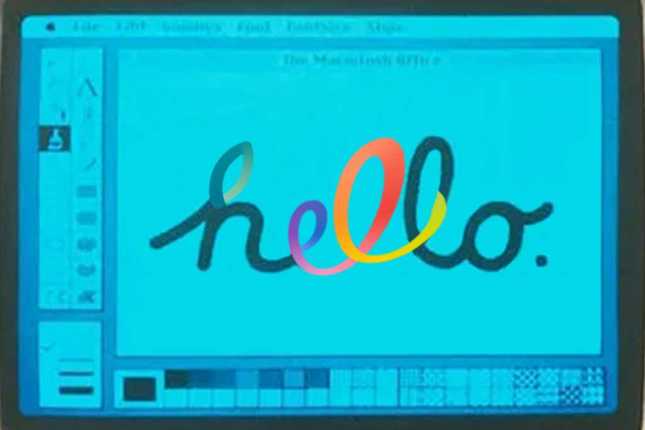 Source: Macworld
ALSO READ: The Semiconductor Shortage Is Massive and Growing: 4 Stocks to Buy Now
Get Our Free Investment Newsletter