Not only did CSX Corp. (NASDAQ: CSX) miss analysts’ second-quarter estimates for earnings and revenues late Tuesday, the nation’s third-largest railroad also cut its revenue outlook for the year by up to 2%. The stock traded down about 9% early Wednesday and has dragged every other railroad stock down with it.

In the first quarter of this year, CSX stock rose by about 30%, based largely on a strong economic outlook for the first half of the year. In the second quarter, growth pulled back but remained about 25% higher for the year to date.

The weakness in CSX’s second-quarter revenues came from its intermodal (container) business, which dropped 10% year over year in volume and 11% in revenue for the quarter. For the first half of the year, intermodal volume was down 8% and revenue was down 8%. The company’s second-largest business, hauling coal, rose by 2% in volume in the second quarter and was up by 4% for the year to date. Unfortunately for CSX, coal represents only about a third as much volume or revenue as intermodal.

In its quarterly report, CSX noted that domestic shipments of metallurgical coal increased by 8% in the quarter to 14.8 million tons, but export shipments of thermal coal declined by 7% to 10.6 million tons. Combined, coal shipments rose by 1% compared with the second quarter of last year. In the following AAR chart, the red line indicates 2019 total unit traffic. Traffic is better than in 2016 (purple line), slightly below 2018 (blue line), and well short of 2017 (green line). 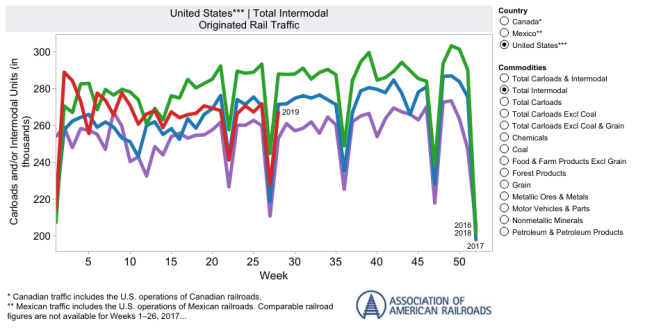 A railroad’s Intermodal shipping volume depends largely on the flow of imports and exports. There’s not much doubt that the tariff war with China has had an impact on both exports to and imports from China, with intermodal traffic being the hardest hit. Transportation industry experts are predicting that the second half of 2019 will be worse than the first half for intermodal shipping, and CSX’s revised guidance seems to underscore that prediction.

ALSO READ: Deutsche Bank Has 4 Sizzling Software Stocks for the Rest of 2019
Get Our Free Investment Newsletter