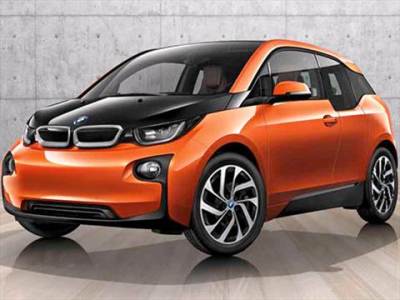 Source: Bayerische Motoren Werke AG
When the editors at Kelley Blue Book (KBB) made their list of the top green cars last year, the 2014 winner was not even available. There is a novelty factor in any list of the top 10 anything, of course, but in the world of all-electric (EV), hybrid electric (HEV) cars and natural gas-powered cars, there are big leaps forward every year, and this year is no exception.

At number 10, the Volkswagen Jetta comes in both EV and HEV models. The manufacturer’s suggested list price (MSRP) on the basic Hybrid SE is $28,130, according to KBB. The Jetta hybrid sold a total of 955 cars in the United States last year, according to HybridCars.com, and has sold 276 in the first three months of this year.

In eighth place in the KBB ranking is the natural gas-powered Civic from Honda Motor Co. Ltd. (NYSE: HMC), which sold just 432 cars in the United States in 2013 and an even more meager 62 in the first quarter of this year. The MSRP on the car is $27,430.

ALSO READ: Are Rising Car Prices a Good Thing for the Economy?

In third place is the venerable Toyota Prius, which is available in hybrid and plug-in hybrid versions. The Prius hybrid first went on sale in 1997 in Japan as the first of the mass-produced HEVs. There are three HEV models, with the best-selling Liftback posting 2013 sales of 34,981 in 2013 and 10,917 in the first three months of this year. The MSRP on the basic model is $25,010.

The top vehicle on the KBB list is the new all-electric i3 from BMW. The car was introduced last November and sales have not been added to HybridCars.com’s list yet. The company has reportedly boosted production from 70 cars a day to 100 cars a day to meet strong demand. That indicates BMW expects to sell around 20,000 of the vehicles this year at an MSRP of $42,275.

Overall, hybrid sales accounted for about 3.3% of all U.S. car sales in 2013, and sales of the all-electrics accounted for just 0.26% of all sales last year.