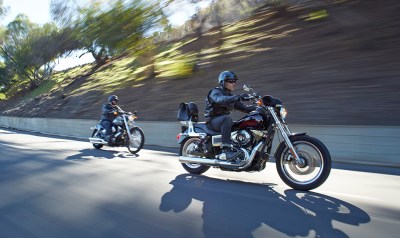 Source: Harley-Davidson Inc.
When investors think about Warren Buffett and Berkshire Hathaway Inc. (NYSE: BRK-A), they probably think of insurance and financial operations. Maybe they think of food, utilities or real estate, or maybe even rail operations now. But would investors dare to think of Buffett riding a Harley-Davidson?

At a time when many investors are thinking about Buffett’s next acquisition, 24/7 Wall St. cannot help but wonder if the Oracle of Omaha might consider tucking Harley-Davidson Inc. (NYSE: HOG) into the Berkshire Hathaway conglomerate structure.

The notion that Buffett might be the leader of a pack of bikers or that he would be the keynote speaker at the Sturgis Motorcycle Rally probably sounds silly. In many ways, the notion that Buffett would not consider owning a company like Harley-Davidson seems just as silly. And Harley-Davidson’s latest fall from the earnings report might only just make the company even more attractive to Buffett.

Buffett is a lover of America, and he loves big American brands. Harley-Davidson has a solid position in its market. It is a highly sought after brand internationally as well, being considered among the world’s most respected brands. Harley Davidson recently signed a 75-year deal with the city of Sturgis, S.D., for its annual motorcycle mania event.

Before you consider that Buffett and Berkshire Hathaway might not want to acquire or partner in a deal to acquire Harley-Davidson, just keep in mind that Buffett already has invested in the company. We also showed recently that Buffett is starting to invest along the lines of a private equity investor rather than just as an operating conglomerate. On investing in Harley-Davidson in the past:

Berkshire Hathaway was an investor in the $600 million round of senior unsecured notes for lending activities inside of Harley-Davidson. The notes were due in five years, but they came with a rate of 15%.

Would Buffett be scared about an earnings disappointment? Almost certainly not, even with muted guidance to consider. The consensus earnings estimate is $4.11 per share in 2015 and $4.58 per share in 2016. This would not quite be 14 times expected 2015 earnings, or about 12.5 times 2016 earnings. If Buffett loves to buy great brands and great companies even at premium prices, this is not a level that would scare him.

With revenues now running above $6 billion, $844 million in net income and almost $1.3 billion in EBIT might be enough to overcome the notion that the $12 billion market cap is four times book value. The company’s $1.2 billion or so in cash seems solid, but that would have been even higher had Harley-Davidson not repurchased $182 million worth of stock last quarter.

What investors have to consider is that Berkshire Hathaway just went big into car dealerships. Buffett also promised to grow that business even further. Well, Harley-Davidson has a network of almost 1,500 dealerships spread over 90 countries. The company also made almost $65 million this last quarter alone just from financing operations — and we know Warren loves financial operations.

ALSO READ: Why Warren Buffett Wants to Own the Credit Card Space