Can Molycorp Stay on the Path to Avoid NYSE Delisting?

Source: Thinkstock
Molycorp Inc. (NYSE: MCP) saw its shares take another solid leap in Friday’s trading to above the $1 mark. This is potentially a huge development for the company and a big first step in the right direction to getting back into good graces with New York Stock Exchange (NYSE) listing requirements. Originally, strong fourth-quarter production numbers caused a jump in early February that kicked off this massive rally.

The company announced on January 2, 2015, that it had been notified on December 30, 2014, that its common stock was not in compliance with the NYSE’s continued listing standard. Effectively, this was the $1 rule that requires a minimum average closing price of $1.00 per share over a period of 30 consecutive trading days.

The implications were further described in the press release from January 2, 2015:

Under the NYSE’s rules, the Company has a period of six months from the date of the NYSE notice to bring its 30-day average share price back above $1.00. During this period, the Company’s common stock will continue to be traded on the NYSE, subject to the Company’s compliance with other NYSE listing requirements. The Company will notify the NYSE of its intent to cure this deficiency.

For the first time since December 3, the stock has traded above $1. Investors may want to consider that this is 49 trading days later. If this level holds, it will be the first time that it has closed above $1 since November 26.

The rally started when an announcement was made regarding the fourth quarter, that Mountain Pass produced 1,328 metric tons (MT) of rare earth oxide equivalent production, compared to 1,034 MT in the previous year. The full-year production for 2014 was 4,785 MT, compared to 3,473 MT in 2013.

The higher production volumes expected at Mountain Pass in 2015 should coincide with the relatively strong demand that Molycorp is seeing for products such as the magnetic rare earth material neodymium/praseodymium, lanthanum and light rare earth concentrate.

This is one of those days when there is also already almost twice the normal trading volume with three hours to go, and ahead of a holiday weekend. Many investors are looking for news here. The “real” driving force seems to be elusive. However, small- and micro- cap traders have been talking up the stock, as we had seen well over 50 tweets on Molycorp ($MCP) in the past two hours alone.

Molycorp’s short interest has remained very elevated, with almost 57.2 million shares short as of the last settlement date available on January 30. Shares were still under $0.40 then and in the days prior, so it would be logical to think that some of the short sellers may have gotten out of the way after more than a 150% run higher this month alone. 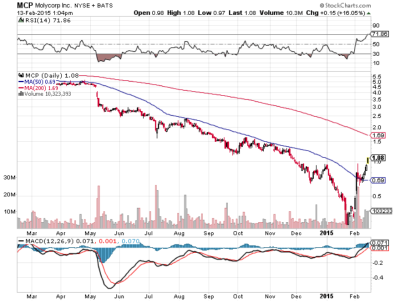