Why Demand for Gold Is Lagging

Demand from gold-backed exchange-traded funds fell by 90% year over year in the second quarter, according to the latest report from the World Gold Council (WGC) released Thursday. For the first half of the year, some 129.3 metric tons (tonnes) were withdrawn from gold-backed ETFs.

That’s only the third time in the last dozen years that outflows of gold from ETFs exceeded inflows. In the first half of 2020, gold-backed ETFs saw a record-setting inflow of 731.2 tonnes. 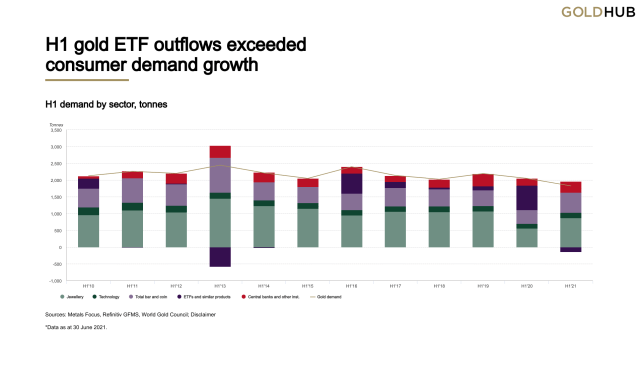 As the chart indicates, total demand for gold in the first half of the year was buoyed by demand from the jewelry sector and the bar and coin sector. Central bank demand rose by about 63% year over year

The obvious question is whether bitcoin (and other digital coins) is replacing gold as a store of value. Companies like Tesla and Microstrategy that have invested some of their cash in bitcoin get a lot of ink. Microstrategy’s market cap is around $6 billion and its investment in bitcoin was valued at around $3 billion as of late June. Tesla’s bitcoin holdings are valued at around $1.5 billion, a relatively tiny 0.2% of the EV maker’s $640 billion market cap.

Inflows of capital into all ETFs are set to shatter 2020’s record-setting inflows. In the first half of 2020, net inflows total $473 billion, not far from 2020’s full-year total of just over $500 billion. This year’s inflows are led by demand for equity-based ETFs.

Can gold make a comeback? Drew Rathgeber, senior futures broker and branch manager at AIO Capital, told Barron’s that a “perfect storm” is setting up to drive gold prices “much higher.” Rising production and raw materials cost are creating “cost-push inflation” that the Federal Reserve has so far failed to address.

The signs to watch for, according to Matt Psarras, head of client relations and market research for GoldCore USA, interest rates, debt and inflation. So far, the Fed has held to its view that this year’s rising inflation is transitory. That view has weighed on gold prices that Psarras calls “exceptionally cheap.” He also points out that “[g]old cannot go to zero–almost everything else can.” Including, we presume, bitcoin and the dollar.