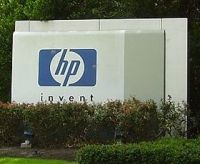 Hewlett-Packard Co. (NYSE: HPQ) reported adjusted third-fiscal quarter EPS of $1.00 on $29.7 billion in sales after markets closed today. In the same period a year ago, the high-tech giant reported EPS of $1.10 on revenue of $31.2 billion. Third-quarter results compare to the Thomson Reuters consensus estimates for EPS of $0.98 and $30.1 billion in revenue.

HP is still in the early stages of a multi-year turnaround, and we’re making decent progress despite the headwinds. During the quarter we took important steps to focus on strategic priorities, manage costs, drive needed organizational change, and improve the balance sheet. We continue to deliver on what we say we will do.

Among those “important steps” is firing more than 27,000 workers as the company seeks to cut costs.

HP shares are up about 2% in after-hours trading at $19.62. The current 52-week range is $17.41-$30.00. Thomson Reuters had a consensus analyst price target of $25.73 before today’s results were announced. Toll Brothers’ price target is due for some adjustment.