Source: Jon Ogg
To raise the minimum wage or not to raise it, that is the big question right now. It turns out that one’s opinion on the matter may be as simple as how you vote. 24/7 Wall St. has wanted to see some independent projections on what the impact would be, and now we have at least an attempt on the matter.

The Congressional Budget Office has forecast that a minimum wage hike up to $10.10 per hour could cost the economy up to another 500,000 jobs.

Two different options were presented by the CBO – one at $10.10 per hour and one at $9.00 per hour – up from the $7.25 minimum per hour now. Most lower wage workers would receive higher pay that would increase their family’s income and some would rise above the federal poverty threshold. The flip-side is that the CBO projects that some low-wage jobs would probably be eliminated.  The CBO’s end results is that the income of most workers who became jobless would fall substantially.

Under the $10.10 scenario, the CBO projected that it would reduce total employment by about 500,000 workers, or about 0.3% once fully implemented in the second half of 2016. Its hedge to the assessment says that there is about a two-thirds chance that the effect would be in the range between a very slight reduction in employment and a reduction in employment of 1.0 million workers.

CBO’s $.00 per hour option would reduce employment by about 100,000 workers, or by less than 0.1%. It signaled roughly a two-thirds chance that the effect would be in the range between a very slight increase in employment and a reduction of 200,000 workers. Tuesday’s report said,

The table included shows a range of projections, and that is broken down by a $10.10 option (first) and by the $9.00 option. 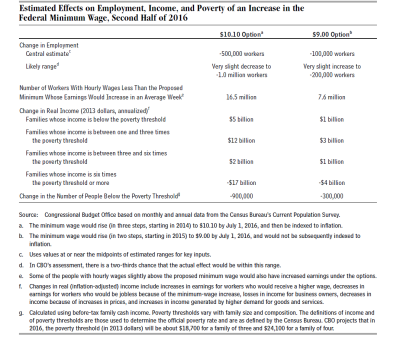 The full CBO report is here and is titled, “The Effects of a Minimum-Wage Increase on Employment and Family Income” for your review.

Keep in mind that this proposal that will cut jobs is on top of a recent CBO budget calculation based upon the fully implemented impact from the Affordable Care Act (ACA) after 2016. This projection was shown to be reducing the total number of hours worked by about 1.5% to 2.0% during the period from 2017 to 2024. CBO listed this impact as being almost entirely “because workers will choose to supply less labor—given the new taxes and other incentives they will face and the financial benefits some will receive.” The largest declines were also shown to likely occur among lower-wage workers.

CBO also projected earlier this month that the ACA will cause a reduction of roughly 1% labor compensation over the 2017–2024 period. Finally CBO concluded,

“The reduction in CBO’s projections of hours worked represents a decline in the number of full-time-equivalent workers of about 2.0 million in 2017, rising to about 2.5 million in 2024.”

$500 Cash Assistance Program From Chicago: Who Will Get It And How To Apply

$300 Direct Tax Rebate From Delaware: Deadline to Apply Is Just a Week Away