Source: Thinkstock
April 15 is coming. That means it is tax crunch time. Everybody, short of accountants and CPAs, just loves to hate the U.S tax code. There are many myths about taxes, many of which are the driving force of political speeches and campaigns each election. So, what are some of these myths in the ongoing struggle of life and taxation?

The reality is that there are many myths, but some stand out more than others. All the wrong people get the biggest breaks. Some people don’t pay their fair share of taxes. Big Business is coddled by tax credits and exclusions and deductions and subsidies. Corporate tax rates are too high. And on and on.

Taxes are not always straightforward either. We have identified 7 sneaky taxes in 2014, and you know there are many more. So, let’s look at some of the largest myths and find some reality.

While hedge fund billionaires are often the reference for higher taxes, the reality is that families making over $457,600 or individuals making more than $406,750 fall into the highest tax bracket of 39.6%. So after you lump in state income taxes, property tax, and other taxes some people who are far from being millionaires and billionaires are paying north of 50% of their income in taxes.

Again, the reality is different. True, the bottom 50% of all taxpayers paid just 3% of all income taxes. But to pay so little also meant that their incomes were less than $34,823 a year. The average tax rate: 3.1%. The bottom 50% also pay a disproportionately large share of Social Security taxes. That’s because once your income exceeds a certain level, you no longer have to pay Social Security at 6.2% of gross income. Another issue here is that lower income earners also have a much higher burden from the taxes that they have to pay for anything they buy. Paying $9 in sales tax per $100 spent eats into your disposable income much faster when you have $500 in disposable income per month versus when your disposable income is $10,000 per month.

This is largely untrue, especially for young families. The tax code gives one-earner families the biggest breaks with bigger personal exemptions than single taxpayers get, child-care credits and the like. If you qualify, you can even get a break for sending your kids to day camp. And, of course, families who own their homes get to deduct mortgage interest and property taxes.  The tax code is less friendly to two-earner families, especially those who earn big salaries. You get no break on Social Security taxes, and deductions and exemptions get reduced as income rises. The code is unfriendly to large families; they become vulnerable to the alternative minimum tax. It hurts seniors if both are collecting Social Security because the second spouse’s earnings are mostly taxable.

Yes, the 35% top corporate rate in the United States is the highest in the developed world. Few companies actually pay at that rate. USA Today reported in February that 57 Standard & Poor’s 500 companies in 2012 reported effective tax rates of zero, it is not true that all corporations avoid income taxes. Fact is, corporate income taxes are really complicated. Any business gets to deduct its costs of doing business. If a company loses money in a given year, it doesn’t pay any taxes. In fact, it can use the losses to offset future profits. That said, the IRS says that 5.8 million corporations filed tax returns in 2010, with 3.3 million reporting actual net income. They paid $223 billion in taxes. Here is a look at some of the companies paying the most (and least) in taxes.

Myth: It should be easy to simplify the tax code and make the economy more efficient.

In theory, yes, and a huge tax law in 1986 did manage to simplify matters. But tax reform is a loaded term. For some, tax reform really means cutting taxes. For others, it means boosting taxes. The goal of the 1986 law was to be revenue neutral. There are reasons it’s so hard to reform the tax code. Ideology is one problem. Also, the code applies to a fantastically complex economy. One taxpayer’s cherished break is an outrage to someone else. So, there has to be give and take, something Washington has little liking for. Just ask Rep. Dave Camp, R-Mich., about give and take. He spent three years crafting a tax proposal that won a lot of praise and criticism this winter. The proposal, however, is going nowhere. Camp is retiring from Congress. And do tax preparers really want tax codes so simple? The American Institute of CPAs claims to have some 394,000 members and they might not want things to be too easy for the public in tax preparation.

Here is a tax bracket table for 2014, courtesy of the TaxFoundation.org. 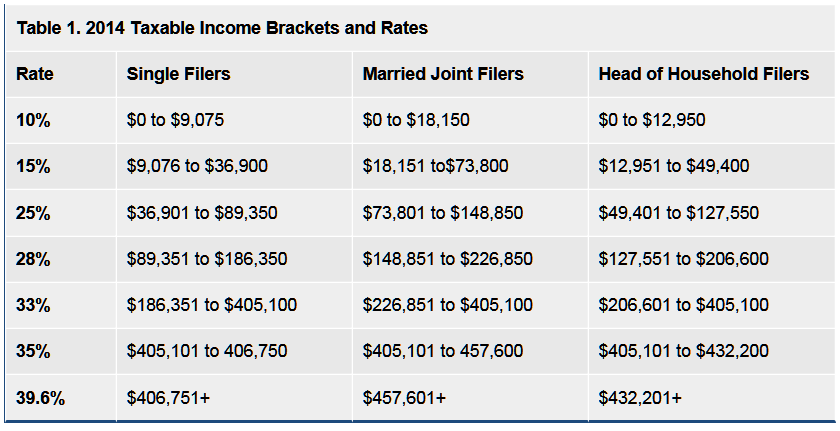