Last Thursday, Hawaii’s Kilauea volcano first split the ground open and then spit molten rock into the air in the volcano’s opening salvo against the Leilani Estates subdivision on the Big Island. Since then, at least another 10 fissures have opened and Kilauea’s flowing lava has destroyed at least 26 homes.

Kilauea is the most active volcano in Hawaii and has been erupting from its East Rift Zone nearly continuously since 1983, according to the U.S. Geological Survey (USGS). Mount Cleveland, in Alaska’s Aleutian Island chain, is also currently active and has been since June of 2015.

Along with the destructive lava flows, Hawaiians have had to contend with earthquakes and, for those near the lava flows, noxious fumes that may be the most serious threat to public health.

The following USGS map shows the ring of volcanoes that stretches through the Aleutians and down the west coast of the United States. The green triangles indicate that there is no current threat level, while the yellow (Mount Cleveland) carries an “advisory” alert and Kilauea is under a volcano “watch.” 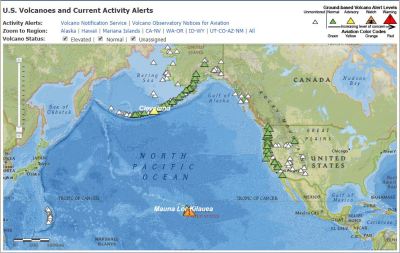 The nearby Mauna Loa volcano received a “yellow” alert level in September of 2015 and has not erupted since 1984. It is the largest active volcano on earth, according to the USGS:

[Mauna Loa rises] gradually to 4,170 m (13,681 ft) above sea level. Its long submarine flanks descend an additional 5 km (3 mi) below sea level to the ocean floor. The ocean floor directly beneath Mauna Loa is, in turn, depressed by the volcano’s great mass another 8 km (5 mi). This places Mauna Loa’s summit about 17 km (56,000 ft) above its base. The enormous volcano covers half of the Island of Hawaiʻi.

Let’s take a look at Yellowstone, a “youthful, active volcanic system” according to the USGS. That’s not all:

Within the next few decades, large and moderate earthquakes and hydrothermal explosions are certain to occur. Volcanic eruptions are less likely, but are ultimately inevitable in this active volcanic region.

Washington’s Mount Rainier is another active volcano and has been so for the last 500,000 years, according to the USGS. The last known lava eruption from Rainier occurred 2,200 years ago. It’s younger and more famous neighbor, Mount St. Helens, is the most active volcano in the Cascade Range, and it is about half as old as Mount Rainier. The 1980 eruption at Mount St. Helens literally blew the top off the mountain and set off a chain of smaller eruptions that by 2013 had refilled about 7% of the crater created by the explosive eruption of 1980.