Civil legal issues include such things as being injured by someone else in a car accident, getting a speeding ticket, custody and guardianship, divorce or a problem related to credit, loans or debt.

The research was conducted in late December last year by SSRS for the Pew Charitable Trusts. SSRS surveyed 1,002 people on cellphones or landlines in English or Spanish, with a margin of error of plus or minus 3.68 percentage points. The survey did not try to determine the seriousness of the reported issues, nor did it try to ascertain whether the respondents thought the problem was, in fact, legal, nor did it try to find out any steps taken to address the problem.

The vast majority of those surveyed reported no civil legal problems, but among those who did, the most common were custodial issues such as assuming guardianship of another family member, such as a parent. One in six (16%) of those surveyed reported having to deal with this issue. The rate of younger adults living with their parents varies widely from state to state — these are the states where the most people still live with their parents.

Problems related to products or services purchased were named by 15% of respondents, while credit, loan or debt issues were called out by 13% of respondents. The following chart shows the variety of civil legal problems and their reported frequencies. 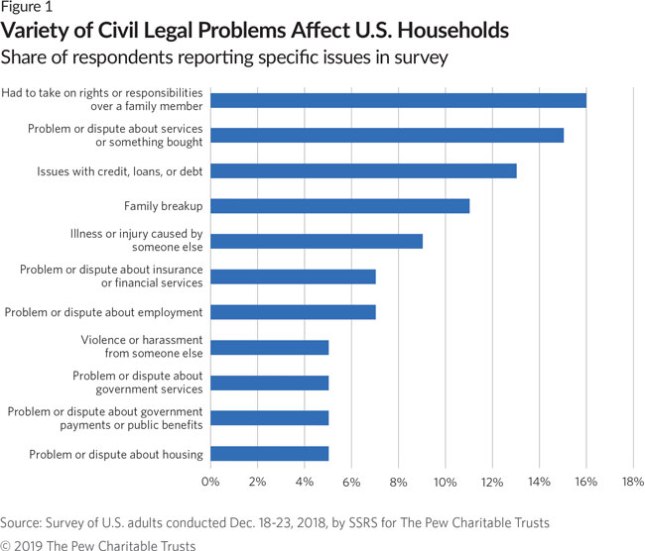 Erika Rickard, Pew Charitable Trusts’ senior officer for civil legal modernization, commented: “The broad impact of civil legal problems confirmed by the SSRS survey suggests that the nation needs new solutions to the problems frequently encountered by U.S. households. This could include, but not be limited to, improving the availability and quality of legal information from courts to help individuals resolve legal issues and pursue remedies with or without a lawyer.”

People who reported an injury or illness caused by someone else were also more likely to have had a problem with credit, loans or debt. Among the survey’s key findings were that renters are significantly more likely than homeowners (61% to 53%) to have a civil legal problem. While buying a home is one of the best investments anyone can make, it is not within everyone’s reach — these are the states with the least and most homeownership.