The pace at which the oil from the collapsed BP rig is spreading accelerated late on April 30.  The Coast Guard and Navy are placing “booms” in the Gulf to try to keep the oil from moving across the Louisiana Delta where the Mississippi river terminates. With a greater amount of shore in danger by the hour, more than 217,000 feet of boom have been set to contain the spill, and an additional 305,760 feet are available.

According to a report from The Wall Street Journal, President Obama will visit the area this weekend.

New estimates from the NOAA show that the pace at which oil is leaking has not slowed “Oil continues to flow into the Gulf of Mexico at an estimated to 5000 barrels (210,000 gallons) per day from three leaks in damaged piping on the sea floor from the,” the agency said. NOAA released its new maps of the leaks effects. 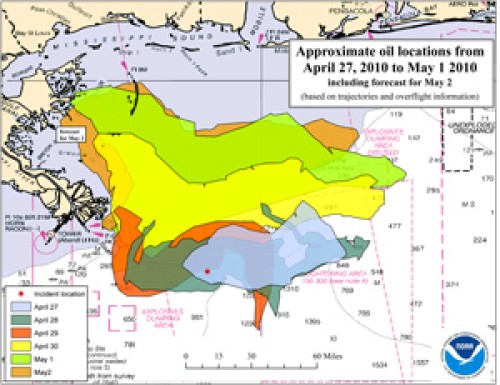 The process of putting a dome, an inverted umbrella of sorts, above the leaks to capture crude and funnel it to ships on the surface may be successful, but estimates are that putting the apparatus in place s. Drilling a new well to release the pressure on the current one could take as much as three months.

The concentration of the spill around the rig is moving away from it rapidly, which means that the volume of the crude reaching land will increase significantly 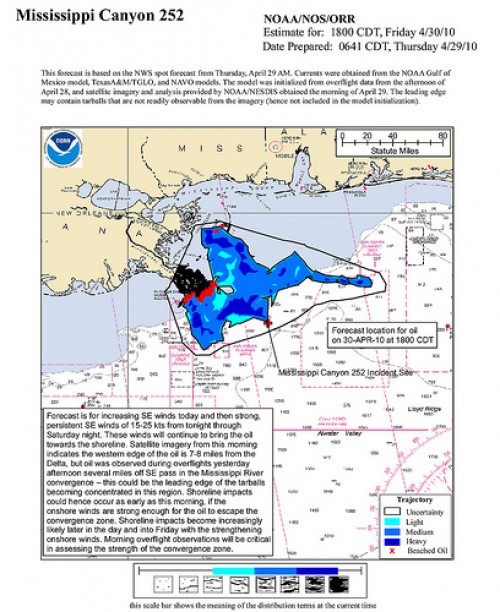 The weather in the region in likely to work against attempts to keep the cruse off shore. “National Weather Service forecasts persistent southeast winds through the weekend which will push surface oil towards shore and hamper surface recovery efforts until a forecast shift on Monday.” Attempted to use chemicals to break up the oil slick have had little effect.

The oil has now covered several areas where commercial fisherman operate. The Louisiana Department of Wildlife and Fisheries announced the closure of both recreational and commercial fishing in areas of likely impact and the Louisiana Department of Health and Hospitals closed molluscan shellfish harvesting areas in the coastal parishes of Plaquemines and St. Bernard.

There seems to be almost no hope that the disaster can be contained in the next several weeks.