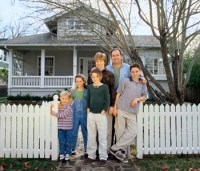 Hovnanian Enterprises Inc. (NYSE: HOV) may have been the hardest hit of all the publicly traded homebuilders since the housing market collapse began in 2007. The share price dipped below a dollar earlier this year, but the company has made a strong comeback, hitting a 52-week high of $4.03 just last week.

“We placed our ratings on Hovnanian on CreditWatch positive following the company’s announcement that it plans to raise $797 million of new first-lien and second-lien secured notes due 2020 and $90 million of convertible notes due 2017 to refinance its existing $797 million 10.625% first-lien senior secured notes due 2016,” said credit analyst George Skoufis. “The refinancing will lengthen the company’s debt tenor by addressing the bulk of its 2016 debt maturities and reducing significant refinancing risk from $1 billion to $218 million. It will also reduce Hovnanian’s interest burden by an estimated $15 million-$20 million.”

Hovnanian will still be a long way from investment grade, but it’s got to start somewhere.