Genworth Financial Inc. (NYSE: GNW) saw its shares tumble on an earnings miss at the beginning of November, but the newest issue is long-term care insurance woes, as the company reported a net loss of $844 million. Genworth was a great turnaround stock after the mortgage insurance woes had started to let up during the economic recovery, but it had a risk-based capital ratio of 445%, compared to an end-of-year target of 400% in U.S. based life insurance. Now Genworth is in a value conundrum, at eight times trailing earnings but valued at 25 times expected current year earnings. Will 2015 be a snapback earnings year? If so, then the stock is cheap — but Genworth will have to prove itself now, and a bull market alone is not going to drive buyers into a turnaround that ran into a big snag. The consensus analyst price target is just above $13, and the 52-week range is $7.17 to $18.74.

Helmerich & Payne Inc. (NYSE: HP) took a dip to 52-week lows during the market sell-off in mid-October, but it bounced briefly after record annual levels of revenue and operating income, before falling back to near the lows. The earnings report brought an admission that actual effects of evolving market conditions on incremental new builds and pricing are hard to determine. H&P also left plenty of wiggle room on its capital spending goals. The decline in oil prices is the huge issue here, so any snapback in activity and pricing would be a welcoming sign for H&P and its shareholders. The consensus analyst price target has been declining and is currently close to $99, and the 52-week range is $76.31 to $118.95.

International Business Machines Corp. (NYSE: IBM) killed its prospects in October when the company released its revenue and earnings outlook a tad early. IBM shares even hit a three-year low after finally removing that silly $20 earnings per share target by the end of 2015. Analysts now expect less than $20 per share, even considering Big Blue’s endless stock buybacks. If you want to know how negative the sentiment is from one analyst, Credit Suisse’s rating of Underperform and its target of $125 are the most pessimistic on Wall Street. IBM has even brought big losses for Warren Buffett, now that this is one of his top four holdings for Berkshire Hathaway. Even valued at only 10 times expected earnings, many investors feel that this valuation is from financial engineering rather than due to great prospects ahead. The consensus analyst price target is about $169, and the 52-week range is $160.05 to $199.21.

Newmont Mining Corp. (NYSE: NEM) has seen its shares take a big drop since the end of summer, as this was just a $26 stock at the start of August. Now under $20, the question remains the outlook for gold prices here for the second largest gold producer. Could a rumored merger help Newmont, or rivals for that matter? Perhaps. At the end of October, the company reported that it had a net income of $210 million, or $0.42 in earnings per share, versus the previous year’s net income of $419 million, or $0.84 in earnings per share. As gold stocks have not performed well, the only surprise here is that Newmont was among the worst S&P 500 stocks of 2014, with a drop of about 30% year-to-date. Newmont’s stock has a consensus analyst price target of $24.76 and a 52-week range of $17.75 to $27.41. A return toward $1,500 gold would be a lifesaver, but what if gold keeps falling and goes under $1,000? Does it matter that this was a $70 stock back at the 2011 peak?

Transocean Ltd. (NYSE: RIG) shares have been on a slow decline in correlation with falling oil prices. What is so unusual here is that the yield has now gone well over 10% due to its continued stock drop. Earnings per share are expected to be above 2013, and both are expected to be above $4.00 per share, but that EPS target is expected to fall to under $3 in 2015 — lower than its $3.00 per share annualized dividend payment. Even the Baker Hughes buyout by Halliburton did not drive shares higher. Given that Transocean is a key global operator, the good news is that its shareholder prospects should recover when oil’s prospects either starting bottoming out or start looking as though they will recover. The consensus analyst price target is $28.17, and the 52-week range is $25.49 to $55.13.

TripAdvisor Inc. (NASDAQ: TRIP) had a big disappointment on its earnings at the beginning of November, bad enough you could say it “tripped” over itself. The travel site reported $0.48 in earnings per share, against a consensus estimate of $0.60 at the time. This was roughly a -20% surprise for the company, which reported about a 10% miss for the previous quarter with a similar reaction in the stock, though not as severe. The stock is also not cheap on valuation, at over 30 times expected earnings for 2014, but the company is still at least growing its top line and bottom line. Shares are very close to a 52-week low, even after close to a 40% pullback. TripAdvisor shares have a consensus analyst price target of almost $90 and a 52-week range of $67.14 to $111.24. Is it possible that the endless growth in online travel information is coming to a peak? Or is there just a peak in what investors are willing to pay for the sector’s growth?

Urban Outfitters Inc. (NASDAQ: URBN) saw its stock tank on an earnings warning issued by the company on October 16. Despite warning that the third-quarter gross profit margin may narrow more than in the first half of the year, Urban Outfitter’s earnings brought even more caution ahead with a fresh, big post-earnings drop. Now the looming question is whether the retailer’s multiple brand empire is becoming too large and fragmented to effectively manage. The stock had a consensus analyst price target above $37 prior to earnings, but many analysts have cut ratings and targets. One bit of good news is that the stock is valued at less than 15 times expected 2015 earnings. The bad news is that investors are used to above-market valuations, and that goal of doubling sales by 2020 is feeling ever more like IBM’s goal of $20 in earnings per share. Urban Outfitters’ 52-week range was $29.11 to $40.67 before the earnings report took shares to a 52-week low under $29. 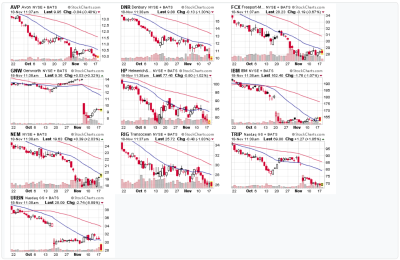