A basket of 37 meme stocks tracked by Bloomberg is nearing a bear-market dive of 20%. At market close on Thursday, the basket’s price was just short of being down 20% from the recent high posted on June 8.

Four of the best-known meme stocks have shed at least 25% of their value over the past month, according to Bloomberg. BlackBerry Ltd. (NYSE: BB) and Naked Brand Group Ltd. (NASDAQ: NAKD) are both down about 27%, GameStop Corp. (NYSE: GME) is down 36.2% and Clover Health Investments Corp. (NASDAQ: CLOV) is down nearly 58% as of Thursday’s closing bell.

There has been a drop of 30% in retail trading, according to Goldman Sachs analyst Will Nance. Eric Liu, co-founder and head of research at Vanda Securities, told Bloomberg, “Retail flows overall have been fairly healthy over the past couple of weeks, though we’re clearly seeing a moderation in buying among the traditional meme names like AMC.”

It’s a sign of the impact that meme stocks have had on the market in just six months that Liu can use the word “traditional” to describe meme stocks like AMC Entertainment Holdings Inc. (NYSE: AMC).

In addition to price, meme stocks tend to trade at high volumes. AMC trades an average of nearly 160 million shares a day, Naked Brands trades almost 94 million and Clover Health trades about 60 million. BlackBerry is the laggard, trading 42 million a day. Alphabet, with its market cap of around $1.7 trillion, trades about 3.5 million shares on an average day, including both its share classes. Only Apple of the country’s five largest companies could break into the top four meme stock volume leaders. More than 83 million Apple shares change hands every day.

Of course, Bloomberg also said in April that the meme stock movement “appears to be petering out,” noting that its basket of 37 meme stocks had traded essentially unchanged after skyrocketing in late January. Less than six weeks later, the basket had bounced to its highest point since the January peak.

Here’s a Bloomberg chart showing price movements in the basket. 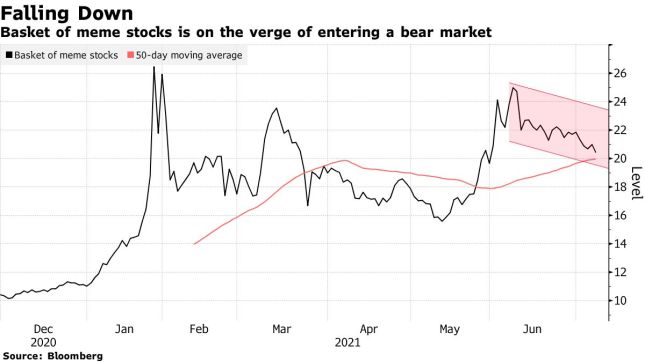 Can the meme stocks reverse their decline and stay out of bear territory? They’ve done it before.