The Nine American Cities Nearly Destroyed by the Recession 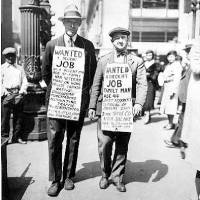 The nation continues to be mired in an anemic, jobless recovery. And according to a report commissioned by the United States Conference of Mayors, and prepared by IHS Global Insight, many regions in the country still continue to lose jobs. Of the 363 U.S. metropolitan regions reviewed by IHS, only 61 will fully recover all the jobs that were lost during the recession by the end of this year. The rest will recover far fewer — the average city will only recover roughly 40% of jobs lost from peak employment.

24/7 Wall St. examined the nine metropolitan regions that are projected to recover less than 5% of the jobs lost during the recession by the end of 2012. These cities, in particular, were hurt by the housing crash, the loss or decline of an industry, and a reduction in government services and jobs.

Many of the cities that will recover the least jobs by the end of this year experienced particularly heady housing markets through 2006. As a result, they also had among the worst housing crashes in the country. In Reno-Sparks, Nevada, median home values dropped nearly 40% between 2007 and 2010. Five of the nine cities on this list had a major decline in housing, with four markets losing 25% of their median home value.

According to the Conference of Mayors’ report, many cities that rely heavily on merchandise exports, such as the automotive-based Flint, have been suffering as manufacturing businesses continue to move overseas. In 2005, nearly 10% of the Flint Michigan’s economy was based on exported goods. As of 2009, the number dropped to just 3.2%. Over that time, the value of the city’s annual exports dropped by roughly $850 million, or 70% of its original value.

Many cities were also hurt and will continue to be hurt by government cutbacks. While most industries will add jobs this year, the government sector will actually continue to shed them. Because of increasingly austere budgets, IHS projects that 196,000 government jobs will be lost by the end of 2012. For several cities on our list, like Carson City, Nevada, a high percentage of government employees comprise the total workforce. Between June and November of last year alone, Carson City laid off over 600 city workers.

24/7 Wall St. examined the cities in the U.S. Conference of Mayor’s report that were projected to regain the smallest percentage of the jobs lost during the recession by the end of this year. 24/7 Wall St. reviewed additional data collected by IHS and from the Census Bureau and Bureau of Labor Statistics to measure the impact of the recession on the nine cities that are projected to recover the least jobs. A full methodology is at the end of the article.

These are the nine American cities nearly destroyed by the recession.