States Where Incomes Are Booming (or Not) 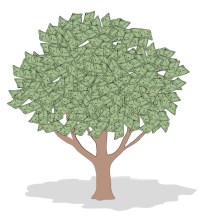 Wages and salaries are the largest contributors to personal income, and employment gains in major state industries contributed to fast personal income growth. States with rapidly expanding energy sectors, for example, ranked at the top for income growth. Employment in North Dakota’s natural resource industry surged 173.2% from 2008 through 2013, by far the largest such increase. As a result, North Dakota led the nation for personal income growth. Similarly, Texas — taking the second-place position — added more than 54,000 energy jobs over that period, the largest raw increase in workers in the country. It will be interesting to see how these rankings change in the future, given the recent collapse in energy prices.

Employment opportunities in an area often help attract workers. While the working-age population fell 0.5% across the country from 2008 through 2013, this age group increased in 15 of the top 25 states for income growth. Conversely, only six states in the bottom half for income growth saw increases in this population.

Fast income growth is almost always a sign of a healthy economy. However, exceptionally strong income growth does not necessarily mean residents are exceptionally wealthy. Montana, Arkansas, Idaho, and Tennessee, for example, which were all in the top ten for income growth, still had per capita personal income well below the national average.

Similarly, income gains in states where residents were already quite wealthy did not appear as large in percentage terms. In fact, nine of the 15 states where income grew the slowest from 2008 through 2014 had per capita personal income above the national income figure in 2014.

These are the states with fastest- and slowest-growing personal income.