The continuing disaster in the Gulf of Mexico has called into question drilling safety practices for oil in the ultra-deepwaters of the world.  Drilling in a well in water more than 5,000 feet deep lies at the very cutting edge of technology. Drilling costs are high and the risks are substantial, both in terms of potential payoff and potential disaster.

The amount of spillage caused by offshore platforms in 2007 totaled 109 barrels in a total of 18 different incidents. The Deepwater Horizon, owned by Transocean Ltd. (NYSE:RIG) and under contract to BP plc (NYSE:BP), is estimated to be pumping crude into the Gulf at the rate of 5,000 b/d. Unless the flow is staunched soon, this incident will surpass the blow-out offshore of Santa Barbara, California, in 1969, which pumped more than 100,000 barrels into the water.

The oil industry has gotten better at preventing and stopping leaks, but a disaster of the kind that BP is battling now is unprecedented. Trying to stop the leaks is essentially a trial-and-error process that is based on experience gained at shallower depths plugging far smaller leaks. The 1979 blow-out of the Ixtoc 1 Gulf platform operated by Mexico’s Pemex pumped about 3.3 million barrels of oil into the Gulf at a rate estimated at 10,000-30,000 b/d.

This photo shows the oil slick and the Ixtoc 1 platform. 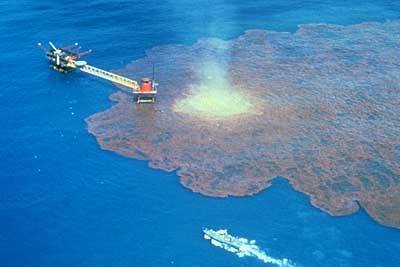 But what about companies that don’t drill offshore? Are they safer for workers and the environment and for investment?

The largest publicly traded US company that holds no exposure to offshore drilling in the Gulf of Mexico is Occidental Petroleum Corp. (NYSE:OXY). Oxy Pete, as it’s called, owns and operates leases in North and South America and the Middle East and North Africa. The company does some offshore development in Qatar and Libya in cooperation with national oil companies, but all work in the Americas is onshore. Oxy’s market cap is about $65.5 billion and its forward PE ratio is 10.97, significantly under its current trailing PE of 18.97.

Another large US company that is actively divesting its Gulf of Mexico assets is Devon Energy Corp. (NYSE:DVN). Devon has sold assets to Apache Corp. (NYSE:APA) and others as it has essentially sold off all its deepwater Gulf and international assets to re-focus on developing its onshore properties. As the company chairman/CEO put it recently, Devon is positioned “to deliver low-risk, profitable, organic production growth on a sustainable basis.” Devon’s market cap is about $30 billion, and its forward PE is 10.40, very close to its current trailing PE of 11.02.

A third company with limited offshore work is Suncor Energy Inc. (NYSE:SU). Suncor is based in Canada and holds more than 23 billion barrels of reserves in the Canadian oil sands of Alberta. The company does hold about 4 billion barrels of reserves of the northeastern coast of Canada, but these are not in deepwater and they have been producing for many years in most cases. Suncor’s market cap is about $50 billion, its forward PE is 11.54, and its current trailing PE is 22.11.

A smaller cap company with no exposure to offshore risk is Forest Oil Corp. (NYSE:FST). In many ways, Forest executed the strategy now being followed by Devon, divesting itself of its Gulf of Mexico and Alaska assets to become solely an onshore producer. Forest Oil has a market cap of about $3 billion, a forward PE ratio of 11.27, and a current trailing PE ratio of 7.98.

Finally, an interesting mid-cap E&P company is Newfield Exploration Co. (NYSE:NFX), which expects to get 11% of its total 2010 from the Gulf of Mexico. About 5% of the company’s total reserves are in the Gulf, and Newfield focuses on deepwater plays. The company expects to drill 3-5 new wells a year for several years and to grow its Gulf production by 60% during 2010, mainly through two new wells that are coming on-line later this year. Newfield, unlike Devon and Forest, is not only staying in the Gulf, but is looking to expand its deepwater development. Newfield’s market cap is $7.35 billion, its forward PE ratio is 11.22, and its trailing PE is 18.19.

Most offshore spills are relatively small and most are the result of some issue with transportation, either by tanker or pipeline. A disaster like the one facing BP now is potentially catastrophic because the leak can continue unabated for months until the flow is stopped. The 1979 Ixtoc 1 blow-out took nearly a year to cap.

According to the American Petroleum Institute, there have been 17 blow-outs in US waters since 1964, all but one (Santa Barbara) in the Gulf of Mexico. About 149,000 barrels spilled into the Gulf as a result of those 16 blow-outs. Since 1969, the total amount of oil spillage into the Gulf from platforms is about 176,000 barrels. The API estimates that between 560,000 and 1.4 million barrels of oil enter the Gulf every year through natural seeps.

Oil production in the deep waters of the Gulf is a high-risk, high-reward business. Only the largest companies can afford to take those risks, and that’s probably a good thing. BP is better positioned than all but a small handful of other companies both to try stopping the flow from the Macondo well and to pay for all the clean-up work that needs to be done.

That’s not to say that Devon and the others are avoiding offshore drilling because they’re scared of the consequences. But it’s possible to make a nice profit with minimum risk, and keep your feet dry at the same time. Many feel that the price of crude will only continue to rise, so working where it’s reasonably safe and dry will turn up good profits over time without having to lose sleep over an offshore disaster. It’s almost like taking a value investing approach to exploration & production.

Sponsor: 5 best investments for 2010 – The next nine months represent a bold new era for investors.