The U.S. drone attack that killed Iranian Lieutenant General Qasem Soleimani sent shivers through global oil markets earlier this month. Crude prices had been climbing all through December following the agreement among members of the OPEC+ coalition to restrain production further. Prices spiked following Soleimani’s death, but have since returned to levels roughly the same as at this time last year.

In its Monthly Oil Market Report for January, the International Energy Agency (IEA) commented on the volatile situation in Iraq. The country’s “strategic importance” to global oil supplies has grown as production has doubled to 4 million barrels a day since 2010, according to the IEA. Iraq’s importance has been magnified by the reduction of exports from Iran, which now total just 300,000 barrels a day, and the collapse of Venezuelan production.

Today’s market where non-OPEC production is rising strongly and OECD stocks are 9 [million barrels] above the five-year average, provides a solid base from which to react to any escalation in geopolitical tension. As a back-up resource, the value of strategic [stockpiles] has once again been confirmed. … At the start of 2020 the oil market has again faced a period of geopolitical turmoil at the same time as a significant sector is adjusting to a major change to its operating environment. That we have such a well-supplied and increasingly globalised market will help us to face these challenges.

The following charts show the price and percentage changes for WTI crude (labeled CL1) and Brent crude (CO1) over the past 12 months. 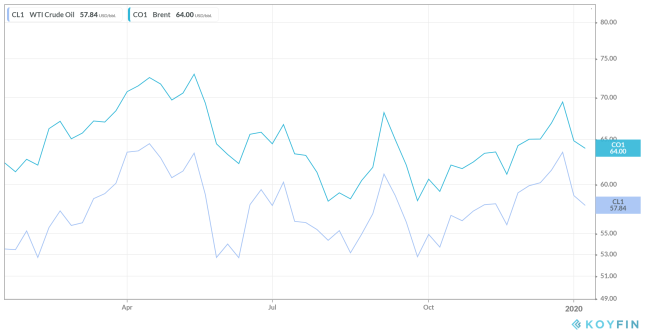 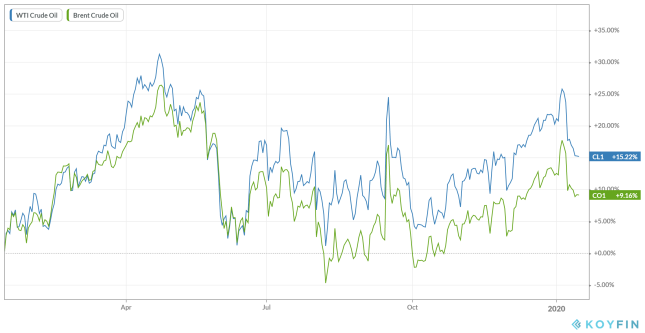 24/7 Wall St.
Why Raymond James Top MLPs to Buy Also May Be 2020 Best Income Ideas
Get Our Free Investment Newsletter