The share of home mortgage loan payments that are 30 days or more past due fell to a 19-year low of 4.0% for the month of February, unchanged month over month and down from 4.8% in February 2018. The foreclosure inventory rate fell from 0.6% to 0.4% year over year, its lowest for the month in at least 20 years. Moreover, the fewest Americans are losing their homes in two decades.

The foreclosure rate remains below the average pre-crisis level of 0.6%, as rising home values have driven homeowners’ equity to record levels, according to CoreLogic. As equity rises, the risk of foreclosure falls.

CoreLogic reported the data Tuesday in its Loan Performance Insights report for February. Early-stage delinquencies, defined as 30 to 59 days past due, declined from 2.1% to 1.0% year over year in February. The share of mortgages that were 60 to 89 days past due in February was 0.6%, down by 0.1 points, compared with last year’s rate. According to CoreLogic, measuring early-stage delinquency rates is important for analyzing the health of the mortgage market.

The share of mortgages that transitioned from current to 30 days past due was 1% in February 2019, flat compared to the same month last year. This year’s rate has moved significantly below the transition rate of 1.2% just before the housing crisis struck and well below the peak rate of 2% in November 2008.

Frank Martell, president and CEO of CoreLogic, added, “We are on track to test generational lows as delinquency rates hit their lowest point in almost two decades. Given the economic outlook, we are likely to see more declines over the balance of this year. Reflective of the drop in delinquency rates, no state experienced a year-over-year increase in its foreclosure inventory rate so far in 2019.”

The U.S. Federal Reserve indicated last week that it will remain “patient” while keeping an eye on job and wage growth and inflation.

Mortgage rates on a 30-year fixed-rate loan dropped to 4.18% on Monday, their lowest level in more than a month and a sharp drop from last week’s rate, as reported by Mortgage News Daily, of 4.29%.

Among the nation’s largest cities, New York and Miami have the highest rate of mortgages at least 30 days past due at right around 5.5%. San Francisco and Denver have the lowest rate, both below 2%. 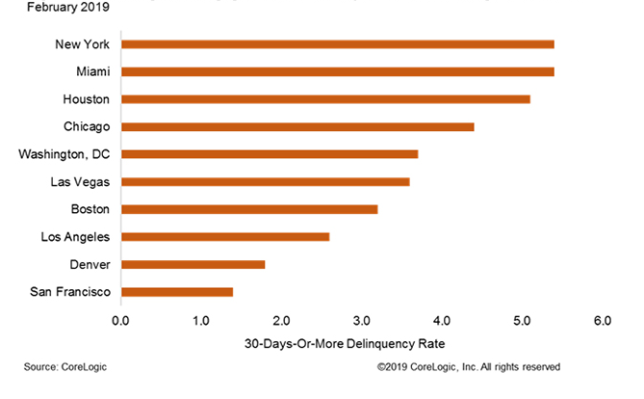