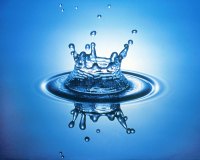 Water may be the source of life, but it is also perhaps one of the most misunderstood and most “under-invested” themes for those investors who want income and growth year after year throughout the various business and market cycles. Apple Fanboys might think that they’ll die if their iPad, iPhone, and iPod are all taken away, but watch what happens if you take away their water few days.  It is also sad to report that investing in water is no simple task today.  Either the water utilities are too narrowly focused, or there is too much dependence upon government contracts, or there is too much of a tie into broader segments like housing or construction for these to be pure “water” investments.

Water is a sector we consider as a “Must-Have” in most long-term investment portfolios.  We have even gone as far as saying that H2O is one of the key and critical investment sectors for futurists, who often look out a decade or more when evaluating trends.

Investing in water used to be much easier, but now companies like General Electric Co. (NYSE: GE) and 3M Co. (NYSE: MMM) have helped to consolidate the filtration segment of the water-trade.  Both of those are attractive investments from time to time, but both are far too broad to invest in just because they have water exposure that will drive growth in the future.  The top water stock for 2011 from 24/7 Wall St. was American Water Works Company, Inc. (NYSE: AWK) and that remains a favorite today.  Shares were trading around $25.30 when that award was issued versus about $29.00 now.  We continue to love this company and we admire its recent dividend hike.

Our goal is not just to update our own price target in American Water Works Company, Inc. (NYSE: AWK).  We believe that can continue on higher and we now think that $35.00 is feasible.  It just raised its dividend and we expect another dividend hike in a year and then again after that.  Still, the goal is to now identify those water investments which offer both growth and safety ahead as the stock market and economy are facing mixed outlooks.

Since we started covering the sector broadly, a lot has changed. Conversely, much remains the same as well and that is a good thing.  The 2012 election cycle is not far away, the economy is in a soft-patch, Greece is a real threat that could to topple Europe, Japan is trying to get out of the red in its GDP again, and both China and India are trying to slow their economies to fight inflation.  We want to review our “investable water universe” and single out some of our own single ‘best idea’ water investing strategies based on today’s valuations and trends of today that can have a significant upside ahead.

Some reports have been out about actual water scarcity here in America.  Securing potable water reserves in the future will be a challenge for many nations and this is where the term “The International Water Wars” comes from.  The water sector has given large rewards in some cases, and been very painful in other cases.

We are reviewing the following today: American Water Works Company, Inc. (NYSE: AWK); Watts Water Technologies, Inc. (NYSE: WTS); Instituform Technologies Inc.  (NYSE: INSU); Tetra Tech Inc. (NASDAQ: TTEK); and Calgon Carbon Corporation (NYSE: CCC).  On the international scene, there is Veolia Environmental S. A. (NYSE: VE) as well as Companhia de Saneamento Basico do Estado de Sao Paulo (NYSE: SBS) as the international emerging wild cards.  To show just how risky this can be in foreign lands, there is Duoyuan Global Water Inc. (NYSE: DGW) that has been crushed with the batch of reverse-merger companies out of China and which has been halted for some time.  For more diversified picks via ETFs, there are also the PowerShares Water Resources (NYSE: PHO) and the PowerShares Global Water (NYSE: PIO) to consider.