13 Companies That Should Consider Stock Splits This Earnings Season

Regeneron Pharmaceuticals Inc. (NASDAQ: REGN) was last seen trading near $585.00, and its 52-week range is $271.37 to $664.64. It has a $62 billion market cap. Regeneron is older than many of the large biotechs as it came public back in 1991. The company has never paid a dividend, and we found no record of any stock splits. Regeneron has many things going for it, but the recent developments of COVID-19 have helped it gain more than 50% in 2020 alone.

Sherwin-Williams Co. (NYSE: SHW) was last seen trading at $680.00, and its 52-week range is $325.43 to $725.91. It has a $62 billion market cap. Sherwin-Williams sells paint all around the country and is a very well-known company. While it pays a 0.8% dividend yield, the last time it split its shares was back in the 1990s and 1980s. Many paint-buyers could repaint their entire home or apartment for less than the cost of a single share of stock.

Shopify Inc. (NYSE: SHOP) was last seen trading close to $1,060.00, and its 52-week range is $282.08 to $1,146.91. It has a $129 billion market cap. Shopify has become the next big thing for businesses and it has been a definite COVID-19 economy winner in helping companies small and large build more robust websites for e-commerce. Shopify is a Canadian company, and it has sky-high valuations at more than 50 times revenues. It pays no dividend and probably will not pay one for years. There have been no stock splits since its 2015 initial public offering.

The Past and Future of Stock Splits

These calls for stock splits are not exactly new. We even made some of the same observations in 2015, including about AutoZone, Chipotle, Boston Beer and Sherwin-Williams.

Investors need to know that there are some dangers in splitting a stock by too large of a ratio. General Electric Co. (NYSE: GE) comes to mind. GE is now trading with a rather embarrassing single-digit stock price, and it was even booted out of the Dow Jones industrial average because its weighting in the index became so low.

Berkshire Hathaway Inc. (NYSE: BRK-A) is one name that comes up over and over for a split due to a more than $300,000 share price, but it now has the Berkshire Hathaway Inc. (NYSE: BRK-B) shares that are closer to $210.00 apiece. Those were created back in 1996. Warren Buffett noted back in the 1980s, even at much lower share prices, that he did not intend to split the stock, but those B-shares split 50-to-one in 2010, and now the stock is much more investable by the public.

One modern reverse split that changed how a stock traded was the case of Rite Aid Corp. (NYSE: RAD). The pharmacy chain operator still has only a $550 million market cap, but at about $10.00 now this would still be a sub-$1.00 stock had it not conducted a reverse-split of one-for-20 back in 2019. Rite Aid used to be very actively traded before its reverse split, with tens of millions of shares trading hands each day. Now it trades about 3 million shares per day. The company’s history shows five splits that took place in the 1980s and 1990s, before the company ran into trouble in 1998 and suffered a low share price thereafter.

Announcing a stock split is not supposed to change the fundamentals of a company at all. Still, shareholders just cannot help themselves from getting excited over traditional stock splits.

To show that high stock prices in many key stocks have become a barrier to new shareholders, recent efforts by Schwab, Fidelity and other services have created fractional share purchasing or “slices.” Even if a stock price magically adjusts to $200 or $300 rather than over $1,000, those slices probably are going to remain popular.

The following chart from Ally recently showed just how out of favor stock splits from S&P 500 companies have become over the past 15 years. Ally also pointed out that stocks splits were less effective as a stock price booster than in recent years, but that did not have the Apple and Tesla hype in there. It showed that since 2010 the S&P 500 stocks announcing splits outperformed their benchmark by about 8% on average in the following 12 months, which might make a CEO and the shareholders overlook the notion that stock splits don’t change the underlying fundamentals. 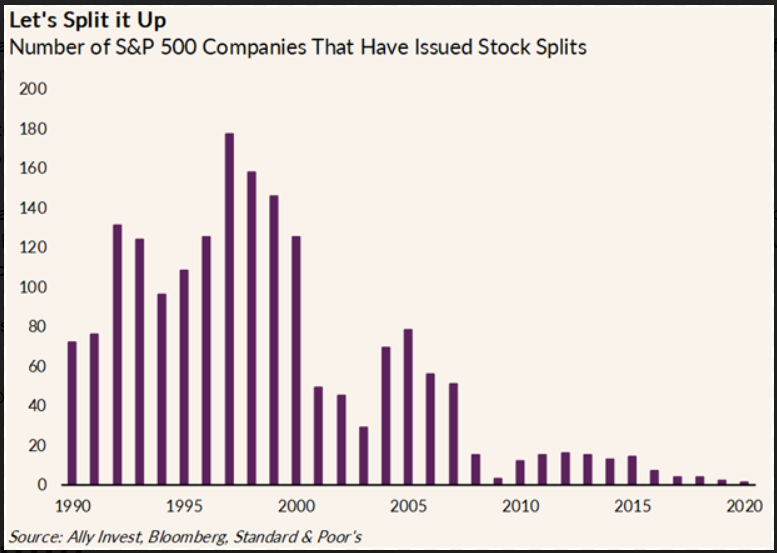