In many ways, Delaware is a very well run state. The unemployment rate, median household income and poverty rate are solidly better than national averages. In 2010, the state was one of just a handful to fund at least 90% of its pension obligation. Delaware has a perfect credit rating from both S&P and Moody’s. But Delaware’s debt load of $6,157 per capita is higher than all but seven states. Incumbent Governor Jack Markell, who took office in January 2009 with an $800 million budget deficit, has closed the deficit in the past four fiscal years through tax increases and spending cuts.

Tennessee has a record of strong fiscal responsibility. For fiscal 2010, the state owed just $922 per capita, less than every other state in the nation. Additionally, 90% of the state’s pension obligations are funded, one of the highest-funded ratios in the U.S. As of 2010, Tennessee had one of the lowest tax burdens in the nation, at just 7.7% of per capita income, well below the U.S. average rate of 9.9%. However, in many ways the state still lags behind the rest of the nation. Last year, just 84.2% of residents 25 and older were high school graduates, while 18.3% of the population lived below the poverty line — both among the worst rates in the nation. Worse yet, in 2011 Tennessee had the nation’s highest violent crime rate, at 608.2 violent crimes per 100,000 people. Crime was even worse in Memphis, which had the nation’s sixth-highest violent crime rate among large U.S. cities.

Texas’ economy grew by 3.3% in 2011, an increase larger than all but three other states. Among the main drivers for the growth is the oil boom. Texas was the largest crude oil producer in the nation last year with 27% of the nation’s total refinery capacity. It has also been able to grow its economy partially through exports, including petroleum products and chemicals, which totaled $250 billion in 2011, or $9,732 per capita — the second-most in the nation behind Louisiana. Outside of energy, the state also effectively manages its finances, owing just $1,679 per capita in fiscal 2010, less than all but a handful of states. Texas imposes low taxes — and no income taxes — on both individuals and businesses. The state has one of the most business-friendly tax climates, and it had one of the lowest tax burdens in the nation in 2010.

Kansas had one of the lowest unemployment rates in 2011 at 6.7%, more than two percentage points better than the nationwide rate. The state has also benefited from rising home prices. The median value of homes in the state rose 12.2% between 2006 and 2011 — one of the higher rates in the nation. In order to create new jobs and grow the economy, Kansas cut personal income taxes and eliminated most business taxes, spurring controversy after Governor Sam Brownback told state agencies to be prepared for 10% cuts to their budgets. The state received an average rating from the Tax Foundation for its business tax climate.

Click here to see the percentage of people living below the poverty line within each state: 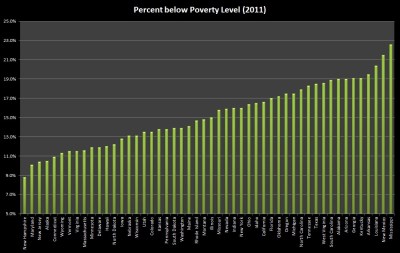 Washington’s recent fiscal record is mixed. Among the negatives, the state had a budget shortfall equal to nearly 30% of the state’s general fund in fiscal 2011 — one of the largest in the nation. However, 95% of Washington’s pension liabilities were funded as of fiscal 2010, more than all but three states. The state also has one of the best tax climates for business and was one of the U.S.’s leading exporters, with $9,463 in exports per capita last year, nearly twice the national average of $4,752. The state’s largest export in 2011, transportation equipment, made up 43% of its exports, likely due in large part to Boeing’s presence in the region.

In 2011, the manufacturing sector accounted for 28.8% of Oregon’s economic output, more than in any other state. The sector is dominated by computer and electronic parts manufacturing, which provided nearly $40 billion in output to the state in 2010. Outside manufacturing, the state’s economy faced several significant challenges last year, despite having one of the highest GDP growth rates in the country in 2011, at 4.7%, Oregon’s unemployment rate was 9.5%, while 17.5% of the population lived in poverty, worse than the respective national rates of 8.9% and 15.9%. However, the state managed its finances well during the recession: 87% of its pension liabilities were funded in fiscal 2010, one of the highest percentages in the nation.

Montana has benefited from a strong real estate market in recent years, with home prices rising 18.4% between 2006 and 2011, the fifth-highest increase during that period. Along with rising home prices, homeowners have been able to afford their mortgages. Last year, the state’s foreclosure rate was one of the nation’s lowest. Montana has one of the strongest business tax climates, according to the Tax Foundation, and has a capital gains tax credit of 2% as of the last tax season. Although Montana is not a high-tax state — its state and local tax burden of 8.6% in fiscal 2010 was well below the U.S. average of 9.9% — it did not face budget shortfalls in any year between fiscal 2009 and 2011.

Relative to its income, there is no state that overspends more than Massachusetts. In fiscal year 2010, state revenue was $50.4 billion, the 11th-highest in the country, while state debt was $73.9 billion, the third-highest in the country. That debt to revenue ratio of nearly 1.5 to 1 was by far the worst in the U.S. State debt per resident was more than $11,000, the highest in the nation. The state’s high debt comes from its spending on social programs. Total state expenditure per capita in 2010 was $7,900 per person, which was among the highest in the nation. Thanks to Massachusetts’ largely mandated health care system, introduced by former Governor Mitt Romney, just 4.3% of state residents were without health insurance coverage, the lowest in the nation.

Pennsylvania weathered the recession and its aftermath better than most states. Home prices rose 13.5% between 2006 and 2011 in Pennsylvania, while they declined 6.3% nationwide during that time. Although the state does not have the best job market, the 7.9% unemployment rate through 2011 was a full percentage point lower than the national rate. The state also had a generous welfare budget — it spent 25.8% of its budget in 2010 on public welfare, the ninth-highest percentage in the country. But some of these expenditures have been pared back recently. For instance, the most recent state budget cut $160 million from the Department of Public Welfare, ending emergency funds for nearly 69,000 residents.