In 1891, Marcus Samuel and Company began shipping kerosene from London to India and bringing back seashells for sale in the European markets. Initially, the seashell business was so popular that it accounted for most of the company’s profits. Samuel incorporated the name “Shell” in 1897 and designated a mussel shell as its logo. In 1904, a scallop shell became the official logo. In 1907, Shell merged with the Royal Dutch Petroleum Company, retaining the logo that remains synonymous with the oil conglomerate. In 1915, Shell opened its first service station in California, introducing the red and yellow color scheme still in use. Today, Shell is one of the world’s largest energy companies, with a market value of nearly $260 billion.

Levi’s logo featuring two horses is perhaps just as durable as the denim it is printed on. Levi’s first used the logo in 1886 as a way to grow its market share before its patent on the jean-making process expired. In fact, the logo became so widespread that, according to Levi Strauss & Co., early customers would often ask for “those pants with two horses.” In fact, the brand used the name “The Two Horse Brand’ until 1928, when Levi Strauss officially trademarked the Levi’s name. Levi’s employed roughly 16,000 employees worldwide as of last year. Its product line now includes jeans, casual and dress pants, and jackets. 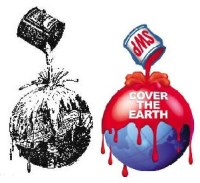 Sherwin-Williams’s logo was originally created in the 1890s by George Ford, the company’s head advertiser. Despite initial reservations about the design, general manager Walter Cottingham considered it an accurate illustration of the company’s rapid growth. In 1905, the “cover the earth” logo replaced an image of a chameleon as the company’s official logo. Sherwin-Williams, based in Cleveland, Ohio, is one of the world’s largest manufacturers, distributors, and retailers of paint. It had nearly 4,000 stores and employed nearly 38,000 people worldwide as of 2013.